A guy called me who had bought a new Asus Windows 10 laptop and wanted me to set it up for him. He also wanted me to clean out his old one that he was going to give to a relative – a Windows 7 laptop that I worked on before. He had a separate USB Ethernet adapter hooked up because the built in one was shot and he was using a standard USB keyboard attached because they spilled liquid on their laptop keyboard and now it seems like only every other key will work. Maybe that’s what also shorted out the wireless?

Anyway, after setting up his new laptop for him I decided to reset the old one to factory settings. It was an Acer laptop. So the first thing I looked for was any Acer software installed. For example on my desktop I have software installed called Acer eRocovery Management. This gives me the options to Restore Operating System to Factory Defaults (everything deleted), Restore Operating System and Retain Data (speaks for itself) and just Reinstall Drivers or Applications.

Unfortunately, no such software installed on this system. So my second option was to restart the computer and use a key combination to go into a recovery mode. With Acer laptops I believe its Alt + F10. You press it when you see the logo. Just follow through from there. My guess is that you would get the same options as I already mentioned available in the eRecovery program.

Tried it a few times and it wouldn’t work. So on to Plan C; just delete the old user account after creating a new one. So first, to create a new administrative account – go to Control panel – User Accounts – Manage another account – then Create a new account.

I gave it the name of user – Clicked on Administrator then Create Account. Windows will not allow you to delete the account you are in so I logged out and logged in to the new account. Then I went to Control panel – User Accounts – Manage another account – clicked on the old account name and clicked Delete the account. Then you’ll have the option to Delete or Keep files. This guy didn’t have anything he wanted kept so I clicked on Delete files.

There were actually two accounts set up on this system. One deleted with no problems, the other another story. It would not go away. Tried a few suggestions found online but the only suggestion that worked was using the command prompt. Click on Start – in the search bar type cmd, right-click and chose Run as Administrator – then type net user username /delete (replace username with the actual name of the user account to be deleted). That worked. 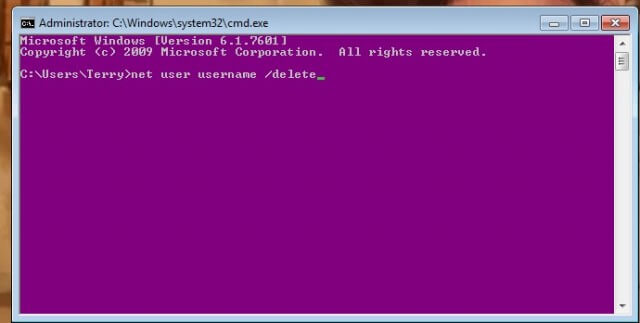