I’m sure many of you are familiar with Microsoft’s System Restore. Hopefully fewer of you have had to use it. For those of you who have no idea what I’m talking about I’ll explain.

Microsoft added a feature in Windows ME (Millennium Edition) which would save snapshots of your system at points in time and named it System Restore. System Restore’s snapshots are not a backup, or complete copy of your hard drive, but a copy of the full registry and important system files. It does not copy or backup your programs, documents, videos, or audio files. That falls squarely on your shoulders, and I recommend Acronis True Image for that reason and many others.

The System Restore functionality in Windows XP improved greatly on ME’s base, and the same can be said about Vista. Vista adds Shadow Copy to the System Restore function. Shadow Copy creates copies of various files including documents and drivers. Sounds great doesn’t it? System Restore and Shadow copy work in the background of all versions of Vista watching and copying as you write documents and surf the internet. The bad part is if you don’t have Vista Business, Ultimate, or Enterprise you have no way of accessing these file copies created by Shadow Copy. System Restore will work flawlessly, but you won’t be able to access older versions of individual files. At some point in the future I imagine someone will write a program which will allow Home Basic and Home Premium users this ability, but it doesn’t come built into the OS.

In XP the operating system reserved a maximum of 12% of your hard drive capacity for System Restore. Vista uses a default of 15% of total drive size or 30% of free space, which ever is lower. As an example, this is 75GB of a 500GB drive for a new installation. Let’s assume you’ve filled your 500GB drive with 350GB of videos and files. Vista could use up to 45GB of the remaining 150GB. XP also had a very easy way of changing the limit of System Restore or turning it off on a drive by drive basic. Vista, unfortunately, only has an easy way to turn it on or off. Changing this limit in Vista is a bit more complicated.

Open the Start Menu in Vista and type cmd. This will show you cmd.exe at the top of the results. Right click on cmd.exe and choose Run as Administrator. This will open a black window, called a DOS prompt, with a flashing cursor.

You will now see exactly how much System Restore is using, and what the maximum Vista may use.

In this example I’ve already made a change limiting System Restore to 5GB. To change your maximum we need to use a slightly different form of the same command.

If we wanted to reduce the space allotted to System Restore to 10GB on drive c: we would use the following command:

If we had two drives and wished to put System Restore on the second drive (drive D:) we would use the following:

After further investigation I’ve learned that Vista WILL NOT allow storage on another partition. Vista will only store shadow copies on the same volume! This means that both the For and On switch must point to the same volume!

So let’s give it a try. I’m going to increase the space allotted System Restore from 5GB to 10GB on my C: drive: 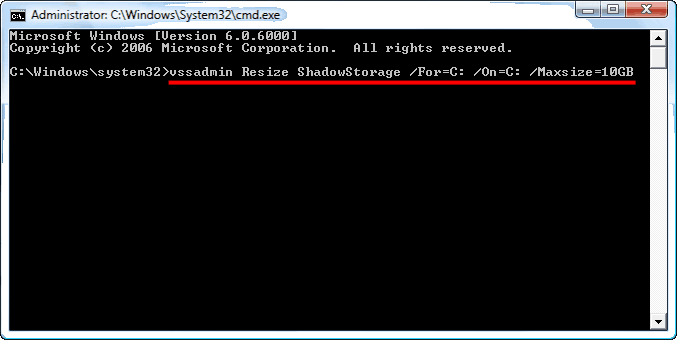 After pressing Enter Vista performs the command and let’s me know it was successful. 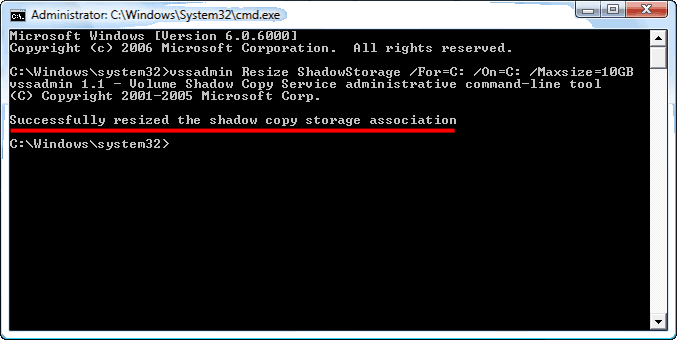 Now using the vssadmin list shadowstorage command we originally used we can see the change. 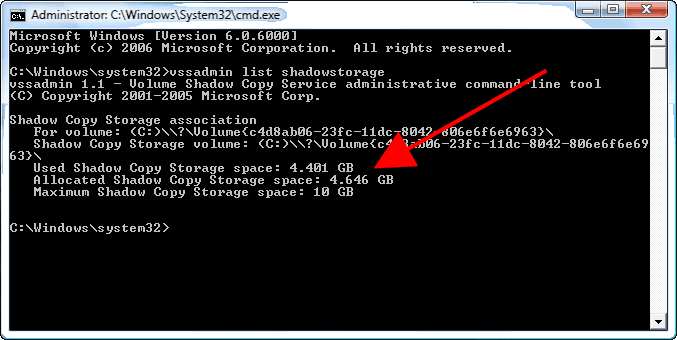 Let’s have a look at some of the Pros and Cons of using this command:

So what do you do? For casual computer users I suggest that you not change anything. If you are a power user with huge hard drives I suggest you set a size to prevent Vista from dynamically resizing on it’s own. I think a good rule of thumb is 10% rounded to the nearest 5GB.

So there you have it, System Restore and Shadow Copy in a nutshell.