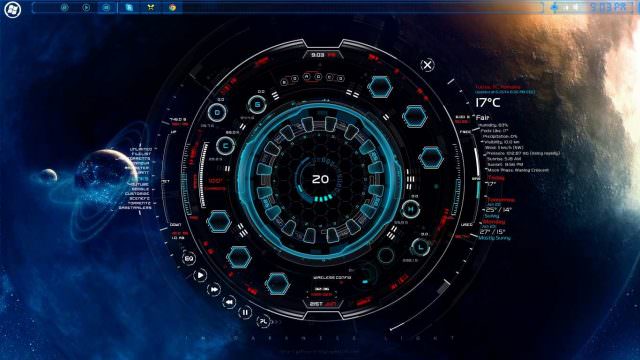 Over the years I’ve played with all sorts of Desktop customisation software, not least following the launch of Windows 8 when we were all left scratching our heads and wondering what had happened to our beloved Start Menu. That particular Windows fiasco spawned all manner of third-party add-ons which I played with, but ultimately, when I had finally persuaded Windows 8 to boot to the Desktop instead of those pesky mobile-centric tiles, I had pretty much ditched the Start Menu anyway and made bosom buddies with the Taskbar. So thank you Windows 8 for being such an abortion, but as they say in Spanish ‘No hay mal que por bien no venga‘ or ‘Every cloud has a silver lining.’

Windows 10 To The Rescue

With Windows 10 sweeping away the bad dream of its predecessor like a princely knight on a white stallion, order was returned in minimalist fashion and my Desktop reflected that sweeping change – until a moment of madness struck me in the form of a Steam sale and an impulse buy, namely Stardock Fences. That moment of madness then led on to further Desktop Pimping as if I’d accidentally become a crack addict overnight and I found the need to experiment difficult to fend off.

Essentially Fences, as its name implies, corrals all your unruly Desktop icons into fences in the same way that we normally group them into folders, except that you can roll up each fence to only reappear with a mouse-over. There are numerous other groovy functions available such as translucency, clearing the Desktop of icons with a double click and swiping between multiple Fences pages. 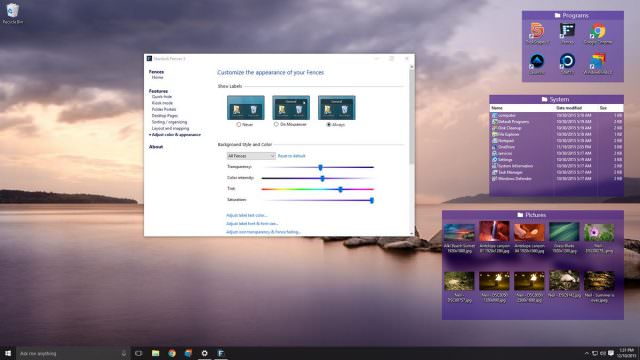 So, whilst trying to convince myself that my quality of life would be vastly improved by Fences’ slick icon-disappearing act, I set to with its stable mate ObjectDock and Winstep Nexus Dock, two programs that ostensibly claim to replace your Windows Taskbar and like RocketDock, both programs do exactly what they promise by docking all your favourite programs in a handy Apple-like dock which you can place virtually anywhere on your Desktop.There’s no denying the slickness of all these docking suites and the animation is both pretty and perfectly functional. Ideally they should be used as a complete Taskbar replacement and the option to permanently hide it is available (as long as the program is running) giving the Desktop a clean Mac-like appearance which appealed no end to my relentless shiny-thing cravings. Ultimately though, I found Fences a tad irritating and pointless, so returned the software to Steam who very kindly refunded me with no questions asked.

But why stop there? I soon discovered that one of the most popular Desktop pimping programs is Rainmeter which, over the years has seen a huge community of followers and designers build up around it, so I installed it and played with a few modules, completely borking my Desktop in the process.

Oh, and I also installed Desktop Gadgets (remember them?) and numerous docking programs to add to the pot pourri simmering away in the background, as you can see from the above image. But in the end, this all proved a little too much. I may be able to multi-task up to a point, but having my Desktop resemble the HUD from an F18 fighter jet was never part of the plan. Besides, I knew that in the end I’d probably spend inordinate amounts of time playing with meters, backgrounds and other tweakable content without getting any actual work done.

I then turned my attention back to the docking software I just mentioned, played with RocketDock and Nexus Dock – which are both FREE with no time limits by the way – and then discovered that Stardock offers their own docking software, ObjectDock. However, RocketDock, although free, was the least inspiring of the three, as the program doesn’t load the default icons at start up and needs a fair amount of tedious configuration. It’s been around for a long time though (2008) and has a huge fan base, but it didn’t grab me at all. Not shiny enough for my magpie tendencies.

NexusDock on the other hand, is highly polished, very slick and truly nerdifyingly professional. The options and different configurations are mouth watering quite frankly, as these words from their website will attest…

And they’re not joking. If you want your Desktop to literally come alive, they offer the Full Monty treatment in the form of Winstep Xtreme which will transform your Desktop in more ways than you could possibly imagine, with themes, icon packs and animations that will have you either salivating with your eyes out on stalks or running for the comfort of a darkened room with a cold flannel over your face. 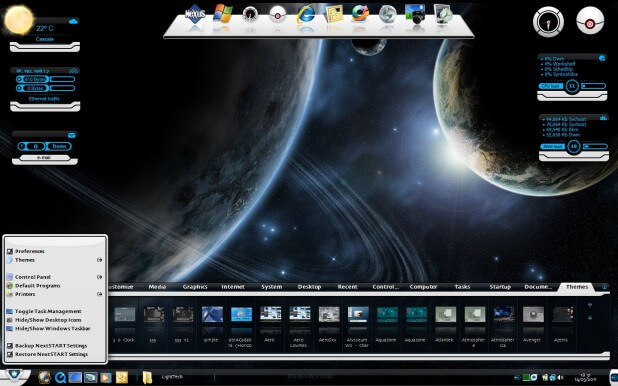 Both NexusDock and ObjectDock are impressively smooth and attractive to use, although one must appreciate that to get the full benefit from docking programs you need to grasp the nettle and ditch the Taskbar for good. Although not mandatory for either program to function as designed, both offer the option of hiding the Taskbar and not just to return with a mouse-over; to make it go away permanently, at least until you decide to re-enable it in the options menu. At first it’s a little odd and disorientating to use Windows without the Taskbar – which is in itself a dock anyway – but if you populate your dock or multiple docks with everything from your Taskbar, it’s mission accomplished.

After countless hours of utterly pointless playtime then, with so much Desktop-pimping software, I almost made a complete U-turn, reverting to Windows 10’s default layout. But no, I thought; why cop-out like a pussy with so much bling to play with? So the end result of all my tinkering, for the time being anyway, is an icon and Taskbar-free Desktop I ditched Rainmeter as the fiddling element was too much even for me, with Stardock ObjectDock, NexusDock and one solitary Gadget measuring CPU usage, being the sole survivors.

HINT: To hide your icons, right-click on your Desktop, select VIEW and un-tick SHOW DESKTOP ICONS.

At the end of all these shenanigans, it’s a toss up between Stardock and Nexus, but rest assured that I’ll bring any developments to light as they unfold.

Do you pimp your Desktop?

**All software used at your own risk.