iPhones are not necessarily known for their great battery life.   While Apple has improved battery life with each generation of iPhones, it has never provided a way to find out what apps were killing your battery.  Until now.  It’s one of the new features of iOS 8.

To find out how much of your battery that an app is using, open the Settings app and go to General > Usage > Battery Usage.    In addition to information since your last full charge, you get a list of apps.  They are listed from the biggest battery hog to the smallest in terms of percentage of battery used when the device is not charging.  You can toggle between ‘Last 24 Hours’ and ‘Last 3 Days’ to see what apps are affecting your battery the most. 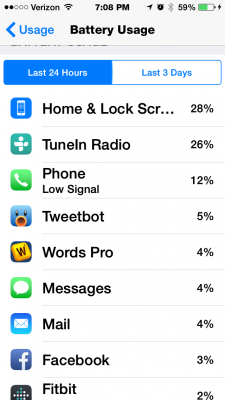 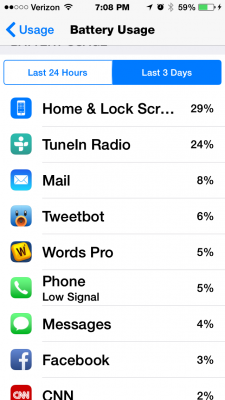 I thought it was pretty interesting that ‘Home & Lock Screen’ was my biggest battery hog.  I often listen to TuneIn Radio on the way to work so I wasn’t surprised that it was the app that used the most battery.

While battery issues are more prevalent on iPhones than other iOS devices, you can get this information for any device that is running iOS 8.

In all fairness, Apple isn’t the first one to offer this type of information.  I have been using Carat for quite a while.   It is an app that is a research project from the AMP Lab at UC Berkeley.   After collecting data for your device for a week or so, it provides personalized recommendations on how to preserve battery life.   It provides a list of specific apps that are battery hogs while Apple’s iOS 8 solution provides a list of battery usage for any of the applications you have been using.