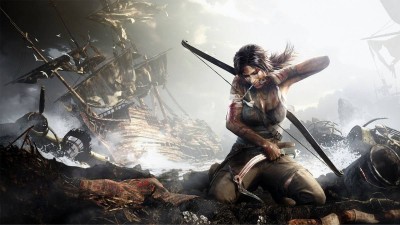 It’s never too late to write about a good game, particularly when that game has had new life breathed into it, as is the case with Tomb Raider. It’s also quite timely following the controversial decision of Microsoft and Crystal Dynamics to go all XBox One exclusively with Lara’s next outing, Rise of The Tomb Raider.

Crystal Dynamics took over the reigns of Tomb Raider from Core Design in 2003, releasing Tomb Raider Legend, Anniversary, Underworld and Guardian of Light to much critical acclaim, even though they stood by the basic roots and principles of the preceding games.

In 2010 a new Tomb Raider was announced which would completely re-boot Lara Croft with a new origins story line and as some would say, a more believable setting for our heroine.

As you would expect with a total reboot, the entire loading and menu screens have been given a makeover and it’s clear that the modified Crystal Game Engine has been finely tuned to maximise the superb graphics in the game. From the very beginning, you are thrust into the game, albeit with a rather long introductory cut scene, which helps lay the foundations of the adventure on which you are about to embark with Lara.

When the cut scene ends and you finally get control of Lara, she finds herself in a very tricky predicament, one even more sinister than her previous adventures to be honest and this sets the tone for what lies ahead.

The first thing I noticed was how beautiful the game looked. Details are important in games today and I spent the first few minutes simply admiring the view. Details such as plants and trees waving in the wind, clouds rushing across the sky, rain falling at a convincing angle and shafts of sunlight spangling the storm tossed sea, jump out at you and bring a tangible sense of reality. 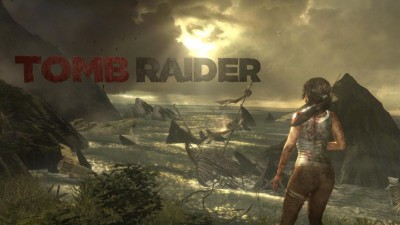 Attention to detail in a modern video game doesn’t go unnoticed, especially when the hardware available today is so powerful. Many developers overlook this aspect and feel that, if the weapons and explosions look convincing, we won’t necessarily notice the other details and consequently they render them in low detail, which although helps load the scene more quickly, often looks like laziness.

Not so in Tomb Raider which is lavish in its rendering and brings the game to a level of photo realism that’s simply stunning. With the addition of AMD’s Tress FX technology, you even get the option to show Lara’s hair as it would in real life; tress, get it?

It’s also noticeable that Lara has been given a less cartoonish and more realistic makeover. She comes across as a twenties something girl as unsure of herself as could be expected at that age. Worth noting also are her physical attributes, which have been toned down considerably from the large breasted versions of previous games, which I’m sure will keep the feminists out there happy, at least for a while anyway.

This is the area where a game either shines or falls.

In Tomb Raider the story develops following the shipwreck of the ship Endurance on which Lara and others have embarked an expedition to a mystery area in the seas off Japan. Finding herself seemingly alone, Lara has to both survive and find some way to regroup with the rest of the gang, which is when the fun starts. Unlike other Tomb Raider games in the series, it becomes apparent that actual tomb raiding of yesteryear is pretty low down on the list of priorities and survival is the key to the story. 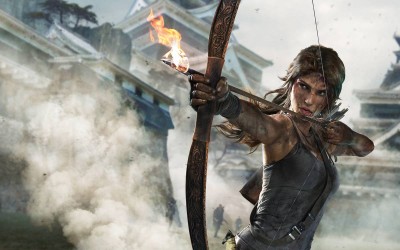 In fact there are no real tombs to raid at all and the side quests, such as they are, seem to have been bolted on as an afterthought, where the puzzle element is childsplay with a difficulty level to match. That’s not to say they’re not fun, because they are. But anyone who’s played since 1996 will know that the puzzle element was always the main draw in Tomb Raider and the hook that kept you coming back.

Like most games, TR uses reward and skill points which can be used to upgrade skills and weapons. The weapons themselves are a blast to use, none more so that the bow and arrow, which when used for a headshot is particularly satisfying. My main niggle with the weapons is that you first have to press an aim button before firing with a different button or mouse click, whereas in most shooters, you simply shoot, as your weapon is available and cocked at all times.

Probably the most intensely irritating element of the gameplay is the quick time event or QTE, which is a scripted scene, usually a struggle-to-escape event which can only be completed by pressing or mashing certain keys in a very strict order. Imagine then that Lara is being touched up by some lascivious East European thug and she needs to escape his clutches by completing the following: bang right/left keys repeatedly, smash E key repeatedly, press F key once, mash E key followed by putting your fist through the screen, game over.

Clearly the game was designed for consoles and controllers and if you don’t get the sequence just right and in time with the quick time event, you’ll have to start all over again, resulting in one fried brain, a destroyed keyboard, a monitor with a hole in it and blood dripping from your desk. I’m not exaggerating when I say that it’s the most nauseating and insulting form of gameplay ever devised, requiring absolutely zero skill but maximum frustration and should instantly be drowned in a bucket of dev blood.

Whilst the other characters in the game are largely parodies of other gaming characters, Lara herself emerges as a determined adventurer, who one way or another manages to survive, her team-mates notwithstanding. The combat scenes are intense, the shooting is satisfying and the location is just stunning enough that it makes you want to go back for more so that you can re-live some of the more outstanding battle scenes.

Ultimately, what lets the game down is its lack of challenge, reliance on scripted events and simply watching Lara do stuff with zero skill input from the player. One can only hope that future games at least give back control to the player, instead of immersing us in some kind of interactive Hollywood production, where a mouse and keyboard are simply ancillary. Add to that the now de rigueur check point system, where saving your progress manually is now a thing of history, let alone loading a savegame, we’re in for asking some challenging questions in the future and many would like devs such as Crystal Dynamics to at least pay more than lip service to the people who actually pay them money to play their games.