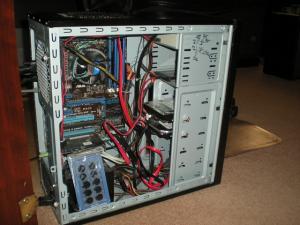 Installed SSD in this PC this morning. Used some velcro tabs to secure it in the empty drive bay. Went in like a charm. 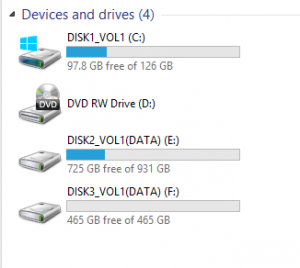 As you can see the SSD is now Disk 1 and Disk 3 is where W8.1 was located. I now have 1.5 TB of data storage now.
I used Easeus Partition Master 10.1 to migrate W8.1 over to the SSD. After reboot I shut down the PC and unplugged the spinner drive and rebooted and selected the SSD from the boot menu just to make sure it was bootable. I shut the PC down again and replugged the spinner drive and was then able to delete the partition and reformat into a data drive.I will now uninstall some programs I have and install them to one of my data drives.I really like W8.1 more than W10, so will have to think a bit more on that option. Daniel.

Speed increase? Have you considered a clean install and going to EUFI and AHCI in the BIOS?

If this PC gets any faster I will have to run to catch up with it, booted up this morning in less than 5 seconds. The most significant and most noticeable increase in speed has been in the access and running of my two VM's. As for W10 I have other plans for this PC and it includes windows media center.

Congrat on your new SSD Daniel.
We'll have to agree to disagree on the Win 8/Win 10 discussion.
I couldn't go back to Win 8, ever.

The migration of W8.1 over to the SSD went very well. If I could find another alternative to Windows Media Center besides VLC Player then I might consider a move to W10.

I must applaud your choice of an SSD. SanDisk is top drawer in my world.

Last summer (2015) I finally took the plunge and bought my first SSD.
I got a PNY, 120GB, purchased directly from the company.
I backed up my OS drive and then did a Restore to the SSD. That worked just fine. The SSD booted right up, and of course, I was blown away by the speed increase. Two months later, one morning, the SSD refused to boot up. It wasn't even showing up in the Bios.
So I called the company (PNY) and they flatly refused to do anything about it. Grrrr! Now PNY is permanently on my SH** List.

While running my PC with my backup drive, I got right on Amazon and found a SanDisk 120GB SSD for a very good price and I ordered it right then and there. Two days later, I had my new SanDisk SSD in my hands, along with the neat little mounting bracket, so I could mount it in a standard hard drive bay.

Besides the speed, One thing I like about the SanDisk is the SanDisk Dashboard, that includes 'Trim'. Nothing like that came with the PNY.

My startups are a little slow, at about 10 sec's, because I run some cleanup options during boot-up, but my shutdowns never take more than five sec's. I use a Quick Shutdown shortcut.

I liked the SanDisk SSD so much, I bought a second one for my backup PC.

A man with experience is never at the mercy of a man with an argument.

I have three PC's running W10 installed on SanDisk SSD's. I try to install most programs on a spinner drive so I don't fill up my SSD drive. I have had to disable the fast startup on two of my machines, kept getting a blue screen. Shutdown and Boot time is really fast. Do not ask how I got W10 on all three machines.

Is the sandisk ssd a good buy? i'm torn between that one or Kingston SSDNow V300

I haven't had any issues with the Sandisk SSD. I do run the 250GB Sandisk and only use it for the boot drive, and a few small programs, all other data is being stored on a 1TB spinner drive. I bought my Sandisks at our local Best Buy, and at the time they were very much cheaper.
I do not know if you are using a laptop or a desktop PC, or what version of Windows you are using. I can tell you that I have two Sandisks running W10 and one is running W8.1.
You have to be careful with your OS clone, and I usually use Aomei or Easeus software to do the cloning. Linux Mint is really fast on a SSD.