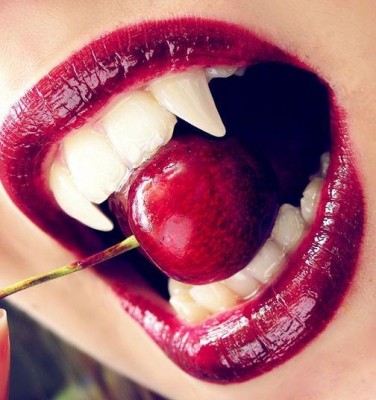 The sound bite is to television what the fang bite was to Dracula.

It was whilst watching the floppy fringed Hugh Grant giving an interview to The Guardian about his latest flick, when some subconscious buttons must have been pressed in my mind and set me off wondering about the current state of our collective attention span. Mr Grant, like many of his age, laments the passing of the good old days or whatever they like to call them nowadays, when our lives are supposed to have been so much sweeter and simpler; when news of events in far off places sometimes took weeks to reach us, at least until the advent of television and radio that is. Then the Internet came along, changed everything and shrunk our world to the seemingly unrecognisable community it is today. 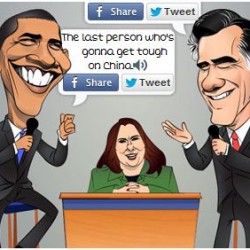 To directly quote the dashing Mr Grant: “I can barely get to the end of a tweet without getting bored now…” and therein lies the point. Much of what we share today is no more than a jumble of words, presented in a bite-size format with maybe a picture of a kitten attached. But it works and of course, politicians do it all the time. Sound bites are what make them tick and you can be sure that many have studied the science in order to increase their effectiveness. Many sound bites follow certain rules which I’m sure the majority of us are not aware of and maybe only abide by, by pure chance.

“Elvis has left the building.”

A one-liner on the other hand is not a sound bite, as Bob Hope so eloquently reminds us:

Rise of the networks

Again, quoting the swashbuckling Mr Grant: “I used to be able to read novels…”

Has our attention span really diminished to such an extent? When was the last time you read a novel? I must confess, I haven’t read a magazine for more than a year or so, but I do read books.

I’m not a Tweeter or whatever name they go by today, for the simple reason that I’d probably press send inappropriately and make a jackass out of myself in no short order. However, I do have a Facebook account and a handful of friends, most of whom I’m related to, which reminds me of how odd it feels to ask one’s own brother to be one’s friend, but that’s really by the by .

The short, sharp post is very effective and unless they’re of vital interest and importance, the longer diatribes can be tedious troll food at best. But of course much of our social media is designed with that very purpose in mind – brevity. Imagine Fidel Castro or Hugo Chavez posting on Twitter or Facebook; doesn’t bare thinking about does it? Except, in the case of Tweeting, they’d be stuck with the 140 character limit, which for those two, would probably be a tad lenient. 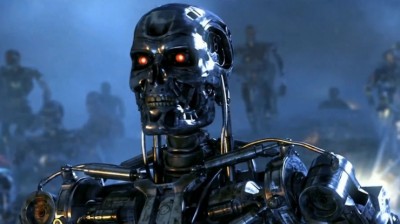 I’m not suggesting for a second that we’ve become slugs or couch potatoes, only able to react to external stimuli as one would to a flickering flame, say; but even as I write this, the back of my mind is prodding me to check out the various posts I made in other places yesterday. To illustrate the point, my stepson told me the other day that he prefers to print course work and read the hard copy as he finds reading it online too distracting. Just that one succinct point probably covers this entire article in one sentence, so I might as well pack up and go home now, don’t you think? I jest of course, but since the Net is now a living, breathing entity, we cannot ignore it, but paradoxically should ignore it if we want to actually get some work done.

Memes are the new sound bites

Memes are pictorial sound bites and if a picture is worth a thousand words, then the meme grabs you in an instant and requires very little neuron processing. It’s said that the original meme was probably Kilroy/Chad, which in it’s own way went viral by appearing on billboards and railway arches, earning itself a place in modern folklore. Much as we shop with our eyes, the meme conveys the message in less time than it takes to blink and quite naturally, one could spend hours trolling through the literally millions of memes on the net, without actually thinking about very much at all. A really good meme, like a classic sound bite, can propel itself into your consciousness and stay there like a Post-it note on a dartboard.

And finally, to quote the ever so charming Mr Grant once again: “I despise people walking down the street like this (illustrates both hands fiddling with a phone)….and in very bad moods, I actually swear at them……” 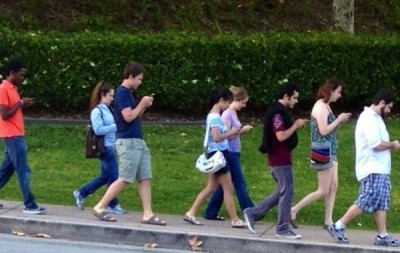 Heck, each to his own I suppose, but if you’re out for a drink with friends which involves human beings actually conversing with each other and an external device constantly interrupts your attention quota, you’re going to get a little peeved, aren’t you? I know I would, so the next time you’re on the verge of solving the last great mystery of the universe with that special person over a cocktail or two and they lunge for their phone mid-syllable, grab the offending object and plunge it into the ice bucket.

Believe me, you’ll thank me for that nugget of advice later.

I was going to insert a Friends meme here, but I momentarily lost my attention to a  picture of a puppy my daughter has just posted on Facebook, so I’ll leave you with this little gem instead:

A new Harris Interactive poll: Nearly 20 percent of smartphone owners aged 18 to 34 report having used their phones whilst having sex.