Dexpot – What is a Virtual Desktop?

Virtual desktops are extra desktops for various sets of icons, applications, browsers and anything else you might find a use for.

I’ve recently been fortunate enough to have several monitors. I use one for writing, another for browsing the internet, and yet another for notes, Twitter/Facebook feeds, gadgets, and so on. There was a time, however, when a single monitor was all I owned. At that time I used Dexpot. It allowed me to monitor all of the above by setting up several virtual desktops, each with their own set of applications, browsers, icons and even different wallpaper if the urge struck me. And I could switch from one to the other as easily as changing a television channel. Click.

If two or three monitors is still not enough screen real estate for you, Dexpot could still be a handy tool.

Any Linux user is well familiar with the concept of virtual desktops as they have been bundled with that operating system since its inception. Not so for us poor Windows enthusiasts.

Dexpot changes all that.

Dexpot Installation and Use

Installation is straight-forward with this one major exception: the installer for the Free Version is powered by OpenCandy. Just read each installation screen carefully and uncheck anything you don’t want installed. Take your time— Read The Screen— they can be tricky.

For more information  you may check out this OpenCandy Frequently Asked Questions Page.

Once installed, Dexpot resides in your System Tray and a right-click will give you more options than you can imagine.

There are way too many Dexpot features to cover in this short article so I will only touch upon a few to give you a glimpse into the possibilities. I figure, why re-invent the wheel. The following three examples are taken directly off the Dexpot site and I couldn’t have done any better than they.

Desktop Manager is a small, always visible toolbar for quick desktop switching. It can be positioned anywhere on your desktop and adjusted in size and orientation. Optionally, it shows the icons of all desktops’ active applications.
An additional button may be assigned with frequently used functions. ~ from the Dexpot site 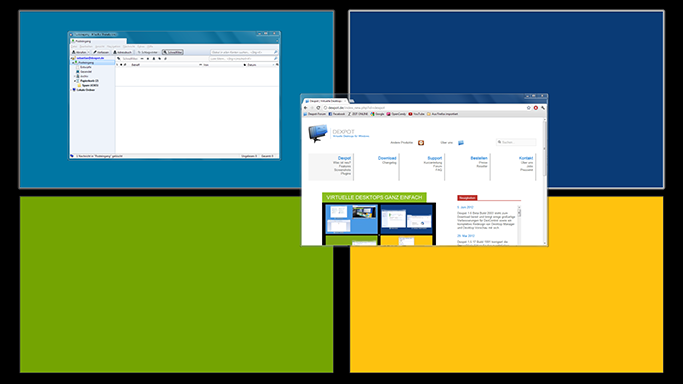 Full-screen preview is an interactive live overview of all desktops. You can move windows to other desktops by simply dragging them with your mouse.
Other, more advanced features like copying and closing of windows or tiling and zooming of desktops are available via easy-to-use mouse and keyboard controls as well. ~ from the Dexpot site 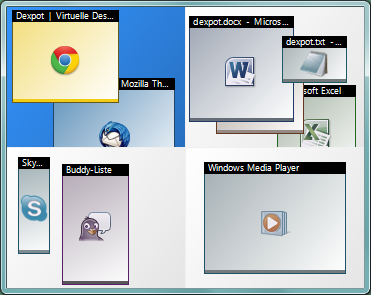 A miniature symbolic version of the Full-screen preview, but just as powerful. Move and copy applications across desktops with drag-and-drop. Desktop Preview automatically hides at the screen edge when you don’t use it. ~ from the Dexpot site

Where to get Dexpot – Free, Portable, and Licensed Versions

Dexpot will work on all Windows versions from XP onward. Any version of Dexpot can be converted to a Portable version.

Dexpot is Free for private use and there are several licensing schemes for commercial use of the product. This information is easily found on their well laid-out site.

Here’s the link you’ve been waiting for: Dexpot Download Page

I used Dexpot for many years and have absolutely no complaints. I think it’s a wonderful tool that will greatly enhance your productivity. Besides, it’s just plain fun.

I have no affiliation with Dexpot nor will I receive any remuneration for writing this article. I simply like the product and wanted to share it with you.

Do you use Virtual Desktops? If you have any suggestions, additions, or new uses for this type of software, please share them with us.

I have succeeded in piquing my own interest and will promptly install this on my dinky little laptop. I’ve been frustrated for months by the inadequate screen space on that laptop and it amazes me that I sometimes don’t see the obvious. I’m just glad it wasn’t a snake! Doh…