Just to show how sneaky these people are; I have a very good spam filtering service through my ISP (Internet Service Provider) which these emails managed to get through. Obviously the perpetrators have learned to avoid those words or phrases which generally raise the alarm bells.

Imagine my surprise then to receive two such emails within a couple of days of each other. The first email purports to be from the ANZ Bank: 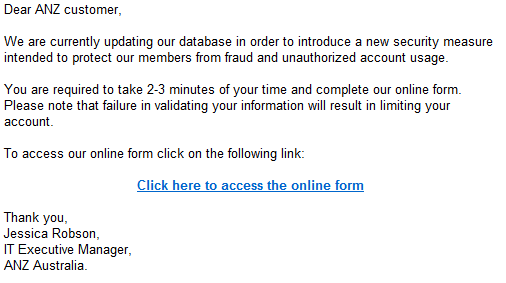 There are several key elements to note here:

This has all the earmarks of what is known as a “Phishing” expedition, the sender is after my bank account details. Here’s how it works; the baddies setup a fake web page which includes a form for for you to fill out, including all your banking details. They then send out thousands of these emails, often including a threat of dire consequences if you fail to comply. They don’t know if the recipients actually have an account at the bank in question but they will always pick a large bank with a very large customer base, so the law of averages will apply.

Here’s the second email I received a couple of days later: 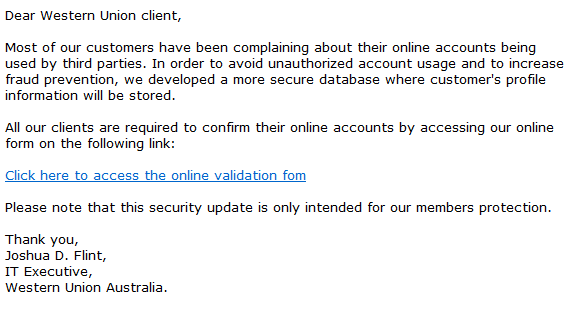 Note the exact same elements; no official logo or identification, the obfuscated URL link, the inferred risk involved with non-compliance. In fact, they are so similar, I wouldn’t be at all surprised if both emanated from the same source.

In this case I don’t even have an account with Western Union, in fact I’ve never even heard of them. So this one was an easy catch. In the case of ANZ though, I do have an account so I immediately warned my lovely wife that if she receives a similar email she should ignore and delete it.

Generally speaking banks do not communicate via email (well, not here in Oz anyway). Should you receive a similar email and have any doubts at all, phone your bank immediately to verify. Do not, under any circumstances, click on the included link!

3 thoughts on “Beware of Scam or Phishing emails!”