We let you know about the good software here at DCT, but we also warn about the not so good.

The prolific software company IObit has recently released an anti-malware freeware called ‘IObit Malware Fighter 2’ which, it claims, includes real time protection. Free tools of this type which also include real time protection are a rarity so I suspect it may attract a good deal of interest, especially among more security conscious users. However, this is one I recommend staying well away from.

For those who may be unaware; IObit is the Chinese software company accused of stealing intellectual property from Malwarebytes some time back. To the best of my knowledge, that serious ethical infraction has never been refuted or disproved. Following that revelation I decided to no longer support or recommend IObit products, and never have since. I must admit, at times I have been tempted to lift that self-imposed ban, mostly due to the popularity of IObit’s products among its users, especially Advanced System Care. Now, with the release of Malware Fighter, I believe my stance has been vindicated. Why? Because IObit Malware Fighter wants to change the default home page and search engine, and comes bundled with a variety of PUPs (Potentially Unwanted Programs). In a program described as being ‘anti-mlaware’, this type of behavior must surely be the epitome of antithesis. Or hypocrisy perhaps. 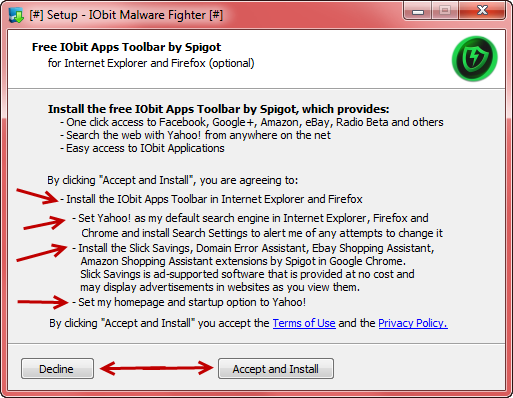 Note the absence of clear opt-in or opt-out options. The buttons at the bottom of the window appear to only allow either to proceed with installation, including bundling and all, or “Decline” and cancel installation altogether. How many less attentive or less savvy users might just go ahead and click the “Accept and Install” button? My guess would be plenty. IObit signaled its unethical tendencies early on in the piece and all I can say is… a leopard seldom changes its spots.

As one would expect, CNET download.com proudly hosts this download, complete with a glowing editorial review.  Surprisingly, MajorGeeks also hosts the download. Even more surprisingly, or disturbingly, IObit Malware Fighter has recently been featured in the ‘Hot Finds’ section of the TechSuppotAlert site… so much for TechSupportAlert’s freeware expertise and regard for user safety.