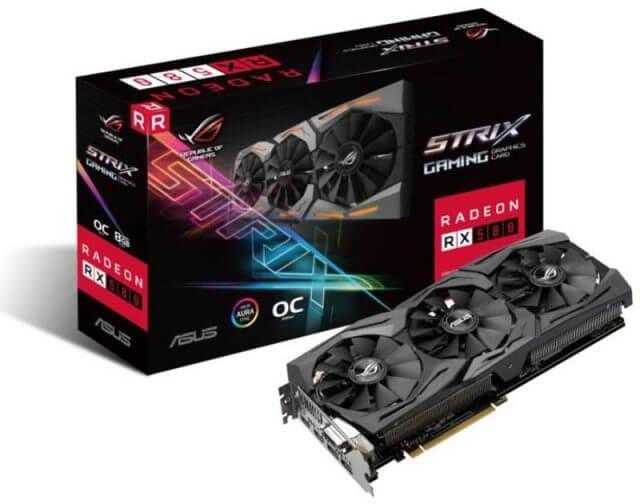 First off, the names given to graphics cards nowadays can be a tad confusing, if not extremely long, which may require some explanation. ROG (the Choice of Champions, no less) is a brand used by Asus since 2006, meaning Republic of Gamers and Strix, although being ancient Roman and Greek for an owl, is in fact a collection of features built into many of the Asus line of gaming products, especially graphics cards. This is because owls have a very keen sense of sight and hearing don’t you know. OC denotes factory overclocked and 8G is the amount of VRAM on the GPU, which is in fact the same amount of system RAM on my wife’s PC. Well, now that we’ve got the definitions and nomenclatures out of the way, why am I writing about this wondrous shiny thing? 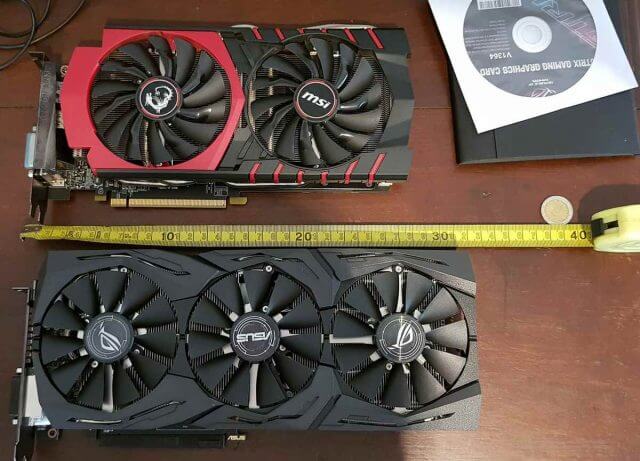 Nearly three years ago I bought an Nvidia MSI GTX 970 4Gb Gaming Edition  (see how those names just get longer and longer?) which at the time was the go-to gamers’ card and I’ve been more than happy with its performance ever since — up until a few months ago that is, when is when I began another round of shiny-thing syndrome. You see, a year in gaming and tech is a long time, and graphically demanding games such as Forza Horizon 3, Rise of The Tomb Raider and Ghost Recon – Wildlands utilise some very large textures to bring us an almost photo-realistic gaming experience. Those textures in turn use a huge amount of VRAM (video memory), especially when the graphical options are set to the the highest settings and the GTX970 was beginning to struggle, even when dialled down to medium. So, what I was looking for was a GPU with plenty of VRAM, good cooling capabilities, plenty of raw power (stream processing units) and was FreeSync compatible, an aspect that only came to the fore after buying a new monitor in the UK last July.

I had considered one of the new Nvidia 10 series cards which use the new Pascal architecture, but not only are the prices out of whack, they’re not FreeSync compatible. Nvidia GPUs use G-Sync instead, but only with a G-Sync compatible monitor, which is a whole different story. To take advantage of my new monitor’s FreeSync over HDMI feature, I had to go the AMD route and finally settled on the RX580 since it met all the conditions I had set. Price was another matter, but I’ll come to that later. 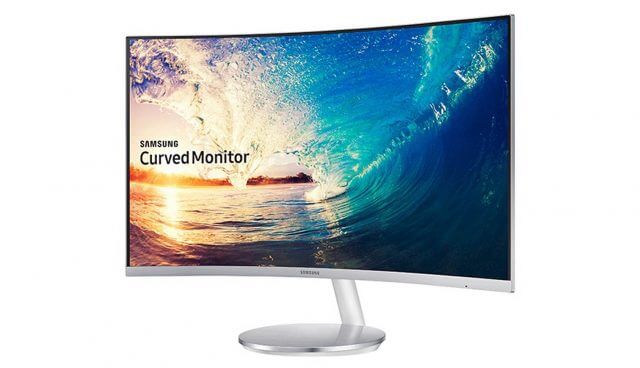 My Samsung C27F591 curved monitor is one of the first models to use AMDs FreeSync over HDMI and also comes with a DisplayPort connection and so it made sense to pair it up with an RX580 to take advantage of all the features.

Anyway, getting back to size mattering, the reason the Asus card is so big, is to accommodate those triple fans and an almost 30cm heatsink which covers the entire length of its body. 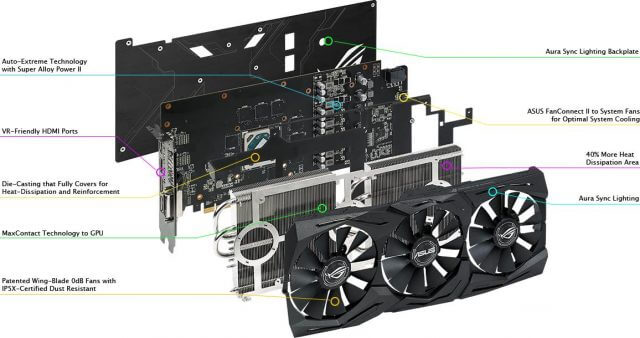 Heat dissipation is an important aspect for me, particularly since summers in Buenos Aires can be extremely hot and although I have water cooling on the FX 8320 CPU, the GPU will be doing most of the work in the types of games that I play. Since fitting the card on Christmas Day, I’m pleased to see that the core temperature of the RX580 idles around 35c and never goes much over 65c when at full load. Clearly ambient temperatures play a big part in the cooling of any PC component and unless you’re using liquid nitrogen or dark alchemy, it’s never going to go below ambient. 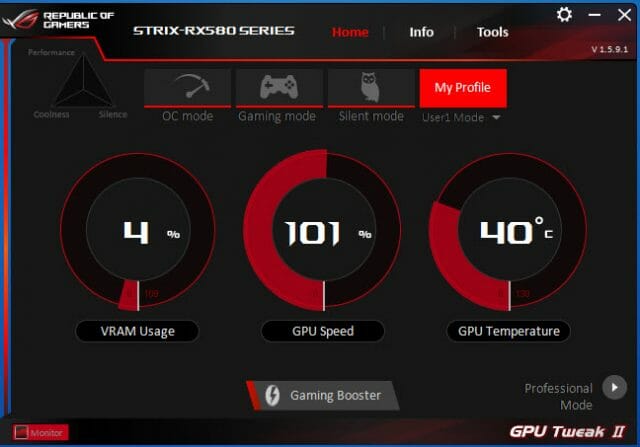 How Does The RX580 Perform?

The first thing I did after installing the graphics card in my PC was to run a few benchmarks using Unigine Valley and the results were a little surprising when compared with the Nvidia GTX970, which easily beat my new RX580. But then I ran the benchmark again on my other gaming machine and was surprised to see that my Radeon 7950 beat the GTX970, which kind of got me me wondering about the veracity of the benchmark software in the first place. So I turned my back on those results in a rather haughty manner and decided to judge for myself in some real-time gaming.

Rise of The Tomb Raider was a great place to start, so I set the graphic settings to very high and watched as Lara struggled to maintain an even 30 FPS. I then dialled down the settings to the next level (high), bumped up to DirectX 12 from 11 and saw a significant increase in performance, at times reaching 75FPS as this image shows. 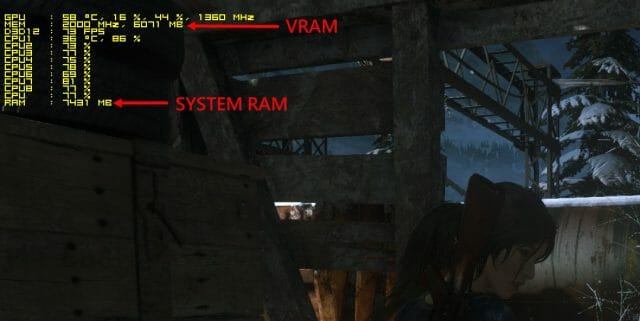 DirectX 12 has come in for significant criticism for its poor performance, but this result from the built-in Rise of The Tomb Raider benchmark utility could maybe confound the critics. See for yourself. 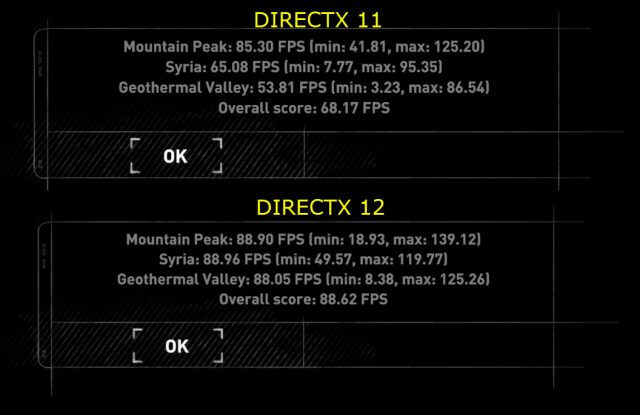 What’s interesting is how much VRAM the game uses, going up to 6GB at times, which reminded me of how important it is to buy a GPU with plenty of memory on board. I then fired up Ghost Recon – Wildlands, an utterly beautiful looking game with landscapes of Bolivian mountains, showing moving clouds and photo-realistic scenery. I wasn’t disappointed and to say I was gob-smacked by the performance would be an understatement. Eye popping detail would be one way of describing the visuals, so judge for yourself.

Surprisingly, the game used a maximum of around 2.5Gb of VRAM and ran at an average of 45FPS and even more when I adjusted the graphics settings down a notch. 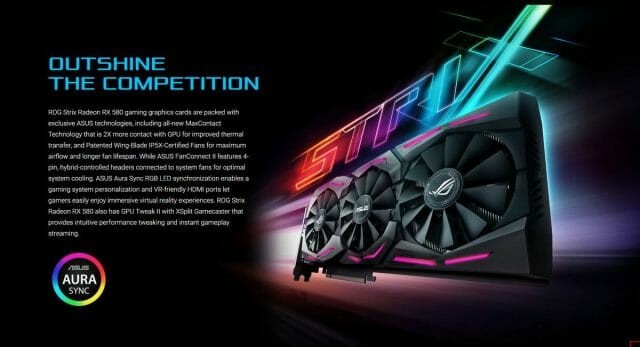 You can light this card up with an endless variety of colours using the Asus Aura Sync software, which is a pretty cool feature. Luckily, the card has a metal backplate with a ROG design cut-out that you can assign different colours to it, and on the fan side, which of course is upside down when fitted in the case, must look pretty impressive if you stand on your head. 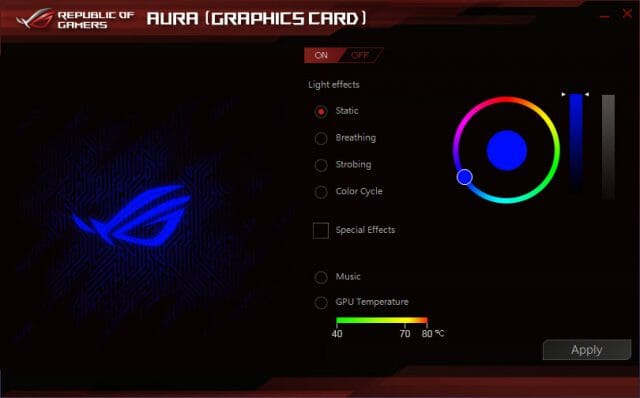 Asus Tweak GPU allows you to overclock the card, but for the moment I’ve left it on the factory overclock setting of 1380Mhz (default 1360Mhz), since it performs perfectly well at that clock speed.

Like many GPU vendors’ software, the utility is a little flaky and frankly, any serious overclockers would be much better off using MSI Afterburner with its OSD ability which I’ve never known to crash.

If You Can Find One

Thanks to the Bitcoin miners who’ve screwed the rest of us by buying up all the high end cards, if you can find this card on Amazon or Newegg you’re going to pay north of $550. Fortunately the miners haven’t completely spoiled the fun down here south of the Mexican border, so I was able to pick one up for around $400, which in itself is a miracle since I live in a black hole as far as imported goods are concerned.

In a word, delighted. I have however experienced some problems with FreeSync which is said to function only with a DisplayPort cable, in spite of my monitor being certified FreeSync Over HDMI compatible. So I bought a DisplayPort cable which ended up being a big mistake because it’s generic and cheap, which never pays as I ended up with serious boot problems and blue screens. This bugged me to hell, so whilst investigating I came across a YouTube video  made by a fellow who had experienced exactly the same problems, putting it down to the cheapo DP cable carrying a current from his monitor to the GPU/motherboard. Naturally I removed the DP cable and replaced it with the HDMI cable supplied with the Samsung monitor and the problem was partially fixed. However, this extract from the C27F591 monitor user manual is confusing to say the least. 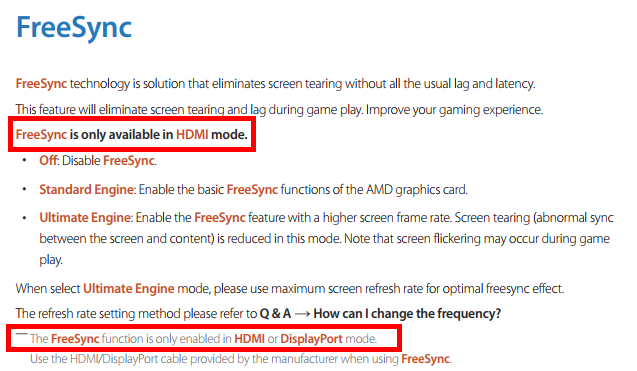 Even with the HDMI cable connected I’m still getting boot problems, but those go away when I switch FreeSync off on the monitor prior to boot — preferably a cold boot. It’s entirely possible too that the latest Adrenalin drivers from AMD are partly to blame, but a rollback didn’t help as FreeSync wasn’t even recognised, so I’m still investigating.

Apart from those niggles, the card performs like a beast in every game I throw at it and those three huge fans, when they kick in at 60c, keep my rig from catching fire. Highly recommended and as discreet graphic cards go, there’s nothing discreet about this one. It’s in your face!