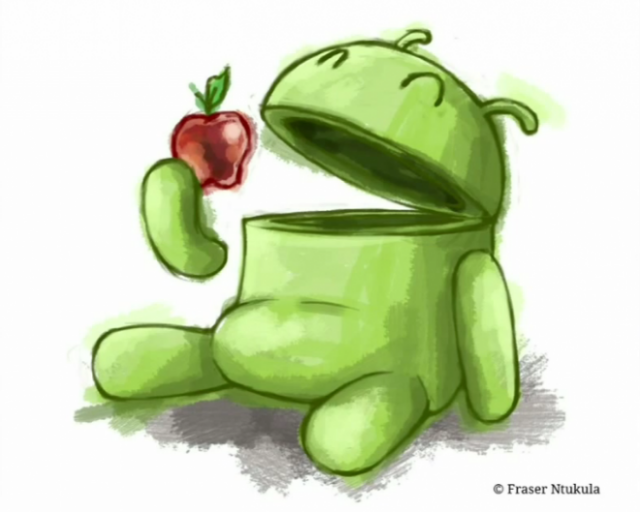 There are many ways to skin a cat, and probably even more ways to measure mobile platform dominance. Not long after Motorola’s first Droid smartphone reached 1 million copies sold, Google, Apple, the media, and fanboys everywhere have all used different tactics and statistics for measuring the relative success of either platform. Over the last few years, people have been trying to get an accurate depiction of the smartphone arms race using an array of figures: number of handsets sold, number of handsets activated, apps purchased, apps available in the respective marketplace/app store, even mobile usage and data consumed by mobile customers. While some figures are more descriptive than others in terms of actual market performance, one figure analysts use to determine near-future commercial success is the number of developers making apps for the platform(s) in question. This makes logical sense: a great degree of the marketability (and thus, profitability) hinges on the quality of apps available for a given ecosystem. We all know that more doesn’t always mean better (and to be fair, the best apps eventually make it to both platforms), but given a pool of thousands of software and hardware geeks hoping to create the next Angry Birds, it’s pretty easy to see how more developers equates to higher chances of a runaway success.

According to a story by CNET’s senior mobile tech writer Roger Cheng, by 2013, Google’s Android operating system may have more mobile platform developers on its ship than current leader Apple’s iOS. Cheng sites a study by market research firm Ovum which claims that, within the next 12 months, Android will have more active developers than iOS. Though Ovum also explains that the vast majority of developers (or at least development companies) will have representatives working on both platforms. Aside from the obvious explanation – they started first — for Apple’s early lead in the developer race, many point to the perceived, relative profitability of developing for the two platforms as explanation for Apple’s success. As website Distimo explains, as of mid-2011, Iphone owners were more willing to buy apps, as opposed to only downloading free ones like Android users were doing, and the ones who do pay for apps buy more apps for their iOS devices than Android customers. So it’s pretty easy to understand why developers preferred apple early-on: they were more likely to sell more apps on that platform. However, as the adoption rate of Android has remained steady, and perhaps even gained momentum, the quality of paid-apps has increased, and consumers in general are more willing to cough up those hard-earned dollars, and developers are now seeing just how much there is to be made on Google’s global, “open” platform. (The 10-day 10-cent app sale in December didn’t hurt Google’s cause either!)

It’s not just Google getting the developer love either. As smartphones become more and more ubiquitous, even Windows mobile and Blackberry OS are seeing an influx of developer interest. Though in Blackberry’s case, the uncertain state of their upcoming Blackberry 10 OS, and the recent shifting of their executives, leaves fewer developers to consider making their apps available on the platform. Windows Mobile, on the other hand, is starting to gain some ground, and may hope to eventually make this a three-dog race. Adam Leach from Ovum explains, “The growing momentum behind Windows Phone indicates that Microsoft has managed to convince developers that its platform is worthy of investment; its challenge now is to persuade consumers.’”

And finally, much to Apple’s liking, Java may finally be on it’s last leg as a mobile development platform:

The study also said developers are abandoning mobile-centric development tools such as Java, Flash and WAP, and moving to HTML5, a Web-based standard that can run across multiple devices and platforms.