A tale of two hard drives

They say that Wednesdays are the quietest of all days in hospital emergency departments for the simple reason that Mondays are standing room only for everyone who got banged up over the weekend and Fridays are reserved for those thanking whichever God they worship that the weekend is just around the corner, often with grizzly results. This cannot be said for the life of a PC technician and yesterday is a case in point.

A lady of American descent, whom I have helped before, phones me to say that her daughter’s laptop ‘isn’t working properly‘ and could she bring it in? So, following my third coffee and a few guilty drags on a ciggy in the welcome shade of a small bush near the entrance to my shop, I welcome them in and the daughter explains that the shiny new Lenovo Edge may have a virus, which is the conclusion most customers seem to reach when a machine isn’t behaving itself. Having ascertained that nothing needs backing up, which is always a huge relief, I get the machine nicely booted into Windows 8, rid it of some malware and unwanted browser extensions and spend the next five minutes admiring its intrinsic beauty, design and build quality, for it truly is a thing of wonder.

When I return from a welcome tea break, I find that the nice machine has switched off all by itself and on restarting, appears to have lost its hard drive, at which point I begin to worry. There are times in life when we can delude ourselves into thinking that intermittent faults will go away all by themselves and never reappear. At least that’s how I used to think when I could still sit on my mother’s lap and got a rude awakening some time later; it’s no different with computers, only probably worse. In this case the machine was coming and going, that is, it was functioning normally for about ten minutes and then giving up the ghost. When I could finally boot to diagnostic media and the hard drive decided that in fact it did exist, it failed at the first post advising me to replace the drive immediately and back up if I hadn’t done so already, blah di blah. Never one to give up that easily, I even tried an Ubuntu Live session, a new Windows install and a Parted Magic session, all of which reported an undefined hard drive error.

There are several reasons why being unable to fix a problem is frustrating and breaking the bad news to the customer is the least enjoyable, but on this occasion, discovering that the machine had been bought in the US only last December, therefore still under warranty and excusing me of the daunting task of major surgery, I was at least able to remain positive when mum rushed over to collect her Lenovo, marred somewhat by the recounting of a virtual kidnapping that had happened to her and her daughter the weekend before (which partly explained the stitches on her forehead I had noticed earlier but hadn’t wanted to comment on). People are good and as I had no intention of charging for my time, such as it was, I was handed a bottle of wine for my trouble, which under the circumstances, seemed impossible not to accept, not to mention a much needed hug of support.

My encounter with another suspect hard drive on the very same day is part of an ongoing saga with a local businessman, not only down on his luck in an increasingly difficult market, but whose personal tragedies would leave most of us totally poleaxed. Some months ago I had received a distressing phone call from him begging for money, to which I had acceded, although the amount was only small change, it left me completely perplexed. Some time later he repaid the paltry amount and then asked me to look at his PC which wouldn’t switch on and during a spell of several weeks we played what can only be described as a game of cat and mouse where I would show up at his business and he wouldn’t be there or pretend to not be there. You know when someone tells you to your face that the cheque is in the post and you both know that it’s never going to happen?

Well, he finally materialised and so, after our initial greetings and brief discourse in his place of work, which involved many tears being shed on his part as, in his own words, I was the only one he could share these problems with, I turned my attention to the job in hand, which appeared on first sight to be a PSU failure, and since I don’t habitually carry power supply units around in my back pack, it would require a return visit at such and such a cost, which he found quite terrifying. As I was about to leave, he handed me an Acer Aspire One netbook, belonging to a friend which wouldn’t start up properly (probably had a virus) and on returning to the shop I felt an overwhelming sense of deja vu, for the hard drive in this unit was also playing hide and seek, which after a couple of hours led me to the inescapable conclusion that the drive was about to fail. Or, in the words of HAL9000, “I’ve just picked up a fault in the AE-35 unit. It is going to go 100 percent failure within 72 hours.”

Yes, I do indeed think of HAL very often when fixing stuff, but I’m pretty sure that on these two occasions, he didn’t have a hand in their demise and as a footnote to this sorry tale of two hard drives, I envisage more games of cat and mouse due to the cost of replacing a common or garden power supply and I’ve yet to hear from the owner of the Netbook, who no doubt will phone me shocked and indignant at the bad news and cost of rectification and demand a second opinion. How do I know this?

If you’ve managed to reach thus far without reaching for the Kleenex, well done you. For my part, I appear to have concluded three quarters of the working day with zero remuneration and the feeling that I may have chosen the wrong vocation. Perhaps investigative reporting would have been more my style? Anyway, another cup of tea and a totally guilt free cigarette later, I got back down to the serious business of breaking other people’s computers and writing tomes such as this with the shop door wide open for some fresh air, whilst pondering the Sony car radio/mini disc player I had agreed to rig up to a PSU for use in the owner’s house. I only agreed to take on the job as a novel challenge, so when the owner finally turned up out of the blue, following an alarmingly similar game of cat and mouse I had become used to playing recently, I showed him what I had done and gave him the good news of how much it would cost, which was met with a resounding reluctance to cough up and much waving of arms.

With the day’s previous experiences still ringing loudly, I was in no mood for mind games and proceeded to dismantle the finished article and show him roughly where he could stick it, whereupon his commonsense prevailed and he dug deep for the few shekels I was charging for my masterpiece, without a hint of gratitude, but many hints as to where he may have got the work done at probably half the price and the demand for a written guarantee and invoice for the work done. At that, he was swiftly and unceremoniously shown the door and instructed in the usual Anglo-Saxon terms, never ever to return, ever.

Later, whilst enjoying a most welcome lie down in the cool darkness of the tiled floor under my desk, I was rudely awakened by the sight of a large, bearded and disheveled shape carrying his home in a huge bag over one shoulder. I quickly assumed a defensive position behind the sales counter as begging in Buenos Aires is almost endemic and as the little girl says in Aliens, ‘They mostly come at night – mostly.‘ But it wasn’t night and here I was, being harassed with menaces for money I neither had or owed to anyone else who hadn’t worked for it. After all, I needed to eat the odd crumb, but my refusal to meet his demand resulted in a poorly enunciated declaration that my mother is a whore and numerous other observations relating to my mother’s anatomy, of which I was ignorant. I found this obsession with my mother very strange, yet manged to eject the beggar with some exemplary use of yet more Anglo-Saxon and vowed to keep the door firmly locked in future, during the witching hour. 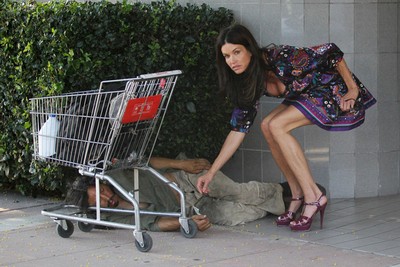