A system running like molasses is one of the most common complaints among my clientele and, in most cases, one of the easiest to fix. There can be multiple reasons why a system is running slow, including anything from malware infections to a lack of regular maintenance, and the following steps constitute the process I go through to try to help speed up a sluggish system. As with most remedial processes, these steps follow a specific logical order:

I use a portable version of Geek Uninstaller for this purpose. In fact, all programs mentioned throughout this guide are free, portable, and carried with me on a USB flash drive. Identifying unwanted/disreputable software becomes easy with experience, however, if you are unsure, you can always perform a search of the title and the results will generally provide the necessary guidance.

These types of unwanted/disreputable programs are not only taking up hard disk space, but more critically, also generally involve background processes which are consuming much needed resources. Uninstalling them will often result in a noticeable improvement, and especially with machines which are somewhat under-powered to begin with.

Step #2: Scan The System For Malware/Adware

Malware/adware constitutes one of the most common culprits for a slow/sluggish system. There are not too many portable malware scanners/removers available, but the two I use are Zemana Antimalware and Emsisoft Emergency Kit (EEK), both of which are very good at identifying and removing unwanted nasties.

*When you click on the above link to Zemana Antimalware you’ll be taken to their “What’s New” page. Here is a screenshot to help you locate the download link for the portable version:

It is rare for me to scan one of my clients’ systems and not find multiple instances of malware or adware– unfortunately, it’s a fact of life. Numbers can vary, of course, but it’s not unusual to come across malware/adware related items numbering in the thousands. In these cases, the system can often be so slow as to make it almost impossible to work with. That’s just one of the reasons why it’s important to remedy this situation as early on in the process as possible.

Programs which are set to auto-start with Windows are, unfortunately, all too common and, in most cases, all so unnecessary. While each individual process may not be consuming too much in the way of system resources, a cumulative effect is created when multiple processes are running in the background.

Security programs which include real-time protection are an obvious exception, and anything else which is deemed critical. Anything else can safely be disabled with zero ill effects. Again, if in doubt, Google the name of the program or process for guidance. In earlier Windows’ versions, startup programs were managed via the Configuration Utility (msconfig), however, in Windows 10 they are now managed under the Startup tab in Task Manager. It’s a very simple process– just highlight (click on) the item in question and then click the Disable button: 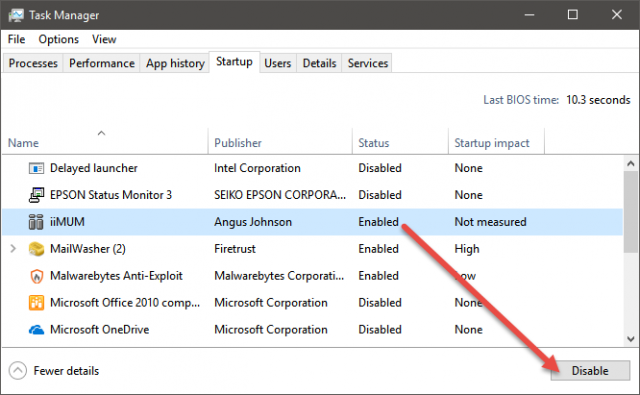 As with auto-starting programs, it is unnecessary for many of these non-Microsoft services to be running in the background consuming resources. Disabling them is simple and, this time, managed via the Configuration Utility: Press the Windows + R keys to open up a Run command box, type msconfig into the dialogue box, then either click OK or press Enter: 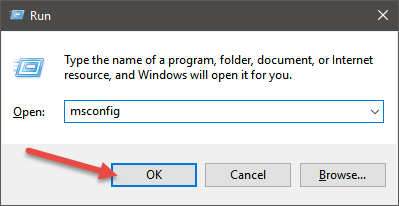 In the Configuration Utility, open the Services tab and enable the option to “Hide all Microsoft services“. The list will then be re-populated with non-Microsoft (third party) services only. Remove the tick from any unnecessary services, then click Apply, OK. You’ll be prompted to restart the system, do so.

Leave any services associated with security software enabled, and I also tend to leave some of the auto-updating services, such as Google, Firefox, and Skype, enabled. Disable any non-essential services, and again, if unsure, a search of the internet can help. 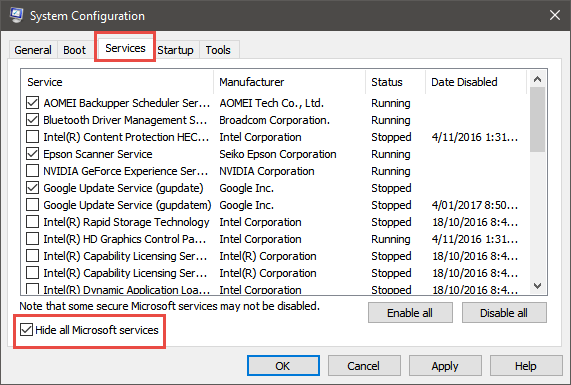 Windows and some installed programs collect and maintain all sorts of data for all sorts of purposes, much of which becomes redundant or useless with time. Unfortunately, too many users do not maintain a regular maintenance schedule so this type of useless data tends to accumulate, often to a ridiculous point. I can’t recall exact numbers, but it has not been unusual for me to remove double digit gigabytes of useless detritus from clients’ machines.

For this chore, I have two portable disk cleaning tools on hand, CCleaner and Wise Disk Cleaner, both of which are very safe and effective enough.

This step is obviously specific to Windows 10. Many users tend to leave Windows 10’s Privacy settings at default and it’s important to run through and adjust them, not only for the sake of the user’s privacy, but also to reduce the potential for consuming valuable system resources, such as all those background Apps for example: 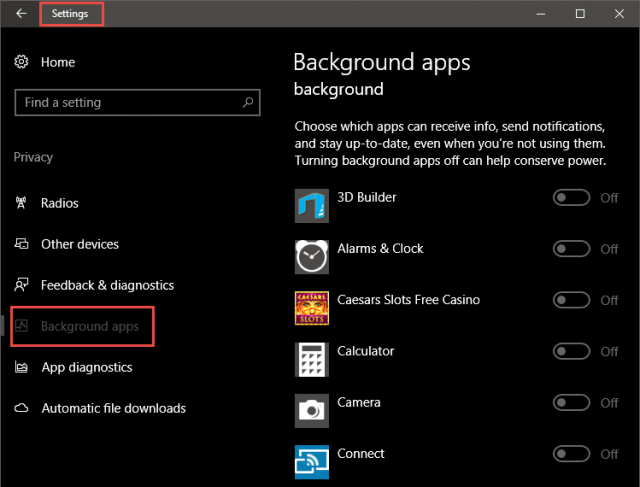 Defragment the Hard Drive (traditional platter type hard drives only): I openly admit this is not something I will generally do. However, if your particular steps have involved a lot of uninstalling, cleaning, and deleting, I would suggest that this additional step may also help, specifically with responsiveness.

Check the Antivirus Program: Antivirus programs can be notoriously heavy on resources, especially some of the commercial programs. Check what system resources the installed antivirus program is consuming via Task Manager: 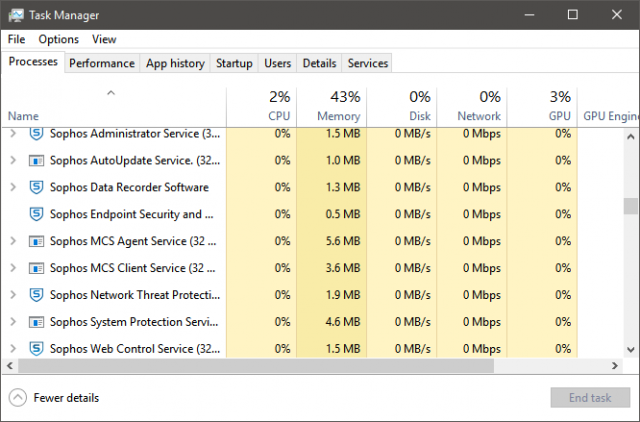 As you can see from the above screenshot, my antivirus solution (Sophos Home) is consuming zero CPU  and very little RAM ( only 21.5 MB total). If the installed antivirus is very heavy on resources, I’d suggest looking for a lighter alternative (again, particularly on machines which are under-powered to begin with). And, if the installed antivirus program is of the commercial variety, it’s not a bad idea to also check and make sure it is still active. I’ve lost count of the number of machines I’ve dealt with where the antivirus program has expired and the system is running unprotected.

Utilize the Reset Option: Again, this is specific to Windows 10. Used to be a time when some users would fresh install Windows periodically to get back to that brand new operating system speed and responsiveness. These day, thanks to Windows 10’s Reset option, that process has been greatly simplified. That said, this should definitely be viewed as a last resort rather than first response. In most cases, following the above steps should result in a noticeable improvement, however, if all else fails, starting off afresh may be the only answer. 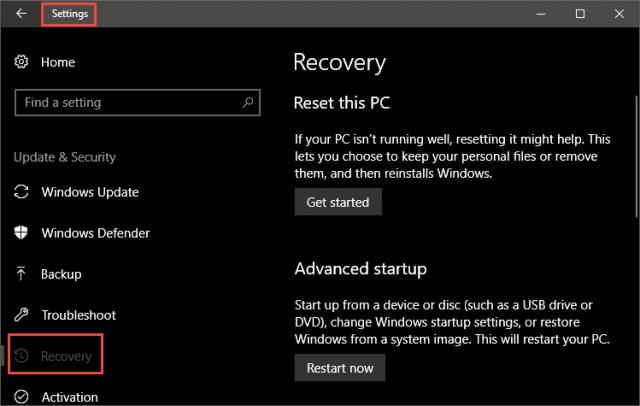 On their own, the effect of many of these steps may be barely noticeable, however, the accumulative effect should result in a noticeable improvement in both speed and responsiveness. Of course, this is all relevant to the processing power of the machine in the first place. Used to be a time when adding more RAM was the generally accepted recommendation for improving under-powered machines. However, in these days, with most modern machines already pretty well RAMMED up, I would suggest a better course of action, if still running a traditional platter type hard drive, would be to migrate the entire system over to a Solid State Drive. This is something I did with my wife’s old HP desktop running an Intel G2020 CPU with 4GB RAM and the improvement with this machine’s overall speed and responsiveness was quite remarkable. At just $59.00AU, a 120GB SanDisk SSD Plus proved to be an inexpensive way of providing this aging machine with a new lease of life.

20 thoughts on “6 Steps To A Faster Computer”