This is the second in a series of articles related to Apple’s WWDC 2013. 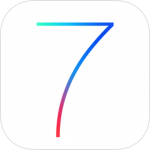 Apple CEO Tim Cook and company took the stage at the Moscone West convention center in San Francisco on Monday, June 10th for its annual Worldwide Developers Conference (WWDC). The much-anticipated update to its mobile operating system, iOS 7, was revealed.

• Senior Vice President of Design, Jonathan ‘Jony’ Ive, had been in charge of hardware design. With the departure of Scott Forstall in October, Ive also took over software design as well. Ive referred to iOS 7 as “unobtrusive and deferential” and “defining an important new direction and in many ways a beginning.”

• iOS 7 is the “biggest change of iOS since the iPhone”, according to Tim Cook. 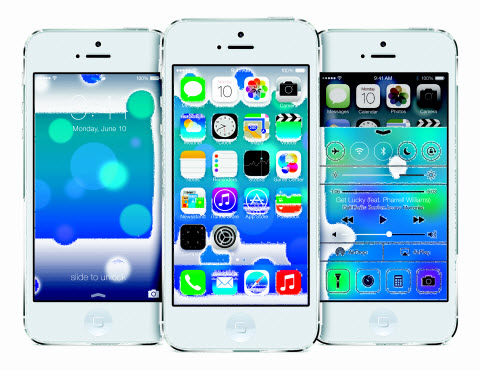 So, what are the big changes in iOS 7?

There had been many rumors circulating that iOS 7 would be flatter, with black and white square icons. In a sense, it is flatter in that the drop shadow and reflective shine features that Apple adds to iOS icons are gone. However, the rounded corners and colors are still there but the appearance seems to be somewhat muted.

Also, as expected, skeuomorphic icons are gone. Skeuomorphism is a design principle in which the physical world is used as cues for design. Classic skeumorphic icons in iOS have been the Newsstand and iBooks with there bookcase look as well as the game table in Game Center.

Many of the iOS native apps have been updated, including Weather, Calendar, Mail and Messages. Generally, the apps are crisper with easier navigation. In addition, the Weather app provides animated weather (rain, snow, etc.)

Folders will now support having multiple pages of apps. I have multiple folders with the same types of apps. This leads to some cluttered screens. With iOS 7, I will be able to combine all of my news apps into one folder, for example.

Notification Center has also been updated. You no longer have to unlock your screen to see Notification Center. Also, there is a ‘Today’ view, with birthdays, weather, your schedule, stocks and a peak at tomorrow’s schedule.

Control Center is a new app that is opened by swiping up. It is an easy way to access those things that you do most. Like Notification Center, it is also available when your screen is locked. Currently, it is a pain to turn Bluetooth, WiFi or Sleep mode on or off on your iOS device. With iOS 7, these features, along with Airplane, Music, AirDrop, AirPlay, Camera and Brightness are just a swipe away. Control Center even includes a flashlight, compass and calculator.

Multitasking for all apps with great battery life – In a somewhat Big Brotherish fashion, iOS 7 will notice app usage so the it can do background updates based on usage and network conditions. iOS 7 will update apps in the background so that the app is ready to go when you invoke it. Also, there is a new user interface for multitasking.

Photos – Instead of having a never-ending Camera Roll, the Photos app will organize your photos in ‘moments’ based on location and date. Moments are then organized in ‘collections’ and ‘collections’ into ‘years’. You will be able to share photos via AirDrop, Mail, iCloud, Twitter and Facebook. iCloud will support shared photo streams, comments and video.

Siri will have a new femaie voice or you can select a maie voice. Siri will also be available in French and German voices with other languages to be added later. In addition to undergoing a voice change, Siri is getting smarter with support for voicemail, Bluetooth and brightness. Twitter, Wikipedia and Bing will be integrated as well.

iOS in the Car – iOS is coming to a car dealer near you with Siri support for the Phone, Music, Messages and Maps, hands-free, of course. Twelve manufacturers are integrating iOS into some of their 2014 models.

While the Music app is getting a new interface, that was overshadowed by iTunes Radio. iTunes Radio is internet radio that lets you listen to established stations or create your own. It is built right into the Music app. It will be supported on your iOS devices as well as iTunes on your Mac or PC and also on Apple TV. The ad-supported version is free. Or, if you are an iTunes Match subscriber, it is ad-free for you.

FaceTime – High-quality audio call over WiFi will be supported in iOS 7.

Activation Lock – If your device is stolen and the thief tries to turn off ‘Find My iPhone’ or wipes your device, they will not be able to reactivate the phone without have your iTunes account information.

iOS 7 is coming this fall for the iPhone 4 or later, iPad mini, iPad 2 or later and the 5th-generation iPod touch.

Read the first article in the series, WWDC – Apple by the Numbers.