As a geek with a strong affinity toward the latest phone technology, I’ve always dreamed of being a beta tester for the mobile phone segment. Even before Apple and Google threw their hats into the ring, Palm, Blackberry, and WinMo were innovating the way we connect to information, entertainment, and each other. For the past two decades, arguably the most technological advancement in any consumer electronics device came from the cellular phone arena, and for every big success and breakthrough, there were likely dozens, even hundreds of failures (can anyone say Microsoft Kin?). Every phone and feature goes through multiple rounds of testing, by both product engineers and consumers, but sometimes that  isn’t enough to prevent some major “flaws” from making it to the final production line. I wonder what I would have done as a product tester for some infamously flawed handsets. Would I have been awed by the design and screen of the iPhone 4, or might I have voiced some hesitation upon discovering the “death grip” of the notorious antennagate? Well thanks to breaking news source twitter, I noticed some curious activity surrounding a certain hastag (#BetaPhone) and website (http://www.smartphonebetatest.com) and figured I’d better check out what all of the hoopla was about.

The internet is such an extra special place allowing strange people with even weirder ideas to build buzz and speculation for their products and projects ahead of release time. Sometimes it’s an ad for a new show movie. Sometimes it’s for a new product release. Sometimes, a temp-website will act as a URL-placeholder until the final site is released. I’m not sure which is the case with Smartphone Beta Test, but we will know on Friday.

If you visit the url now, you’ll see a video stream of SNL star Chris Parnell sitting in a strange room with monitors and such. Above that you’ll notice the countdown to the revealing of whatever it is they are about to announce, (Update: The US Launch of the Nokia Lumia) and at the bottom of the window you’ll notice previous smartphone beta test panels. 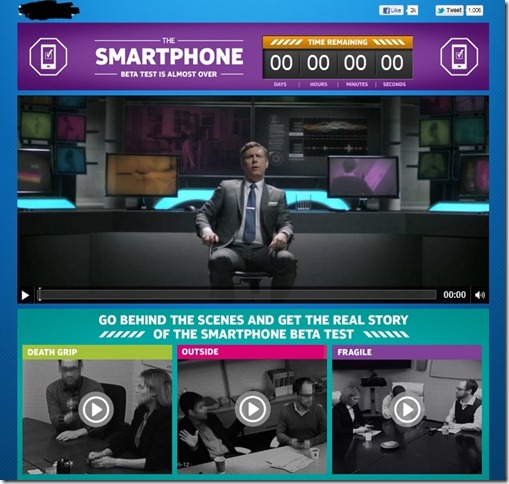 The videos are actually pretty funny. In each, a hesitant employee voices concerns over some rather notorious limitations and drawbacks or recent smartphones. My favorite is the first, Death Grip, in which two other employees repeatedly inform the dissenter that he’s holding his phone wrong, and thus creating his own signal degradation issues. If you remember when Apple released the iPhone 4 in 2010, they told customers complaining of a death grip that they were holding their phones wrong (before eventually being required to give customers free bumper cases or $15 in a class action settlement). Here’s the video from the website:

So last night I saw a commercial during the NCAA tournament advertising SmartphoneBetaTest.com. At the end of the ad, their was a Nokia trademark, further confirming my suspicions that this site is little more than a clever viral marketing campaign to spread word of the Nokia Lumia far wider than the usual Windows Phone 7 audience. And with good reason: the Nokia Lumia is one of the sleekest, best designed smartphones I’ve seen in  a very long time. Every gadget site that has gotten their hands on one has beamed with glowing reviews of the handset. It’s camera is great, the performance specs are great (at least the UK version), and it looks different, in a good way. While wp7 may be the new kid on the block, and its developer and app bases aren’t quite up to par with Google or Apple, Windows and Nokia are doing some really great things with the ecosystem. Apple touts a “symbiotic” relationship between software and hardware for their iPhones, and I have the feeling that Nokia is trying to accomplish something similar by focusing on wp7 as their sole smartphone OS. Further, Windows users who wish their smartphones, xboxes, and computers could communicate and share things amongst themselves like Apple’s computers, phones, tablets, and TV boxes can find salvation in Windows Phone 7, Windows 7 (and soon 8 ) and the updated Xbox dashboard. If you want to get your hands on the future of computing, I’d suggesting starting your foray into the New windows products. And what better place to start than with the Nokia Lumia this Friday? 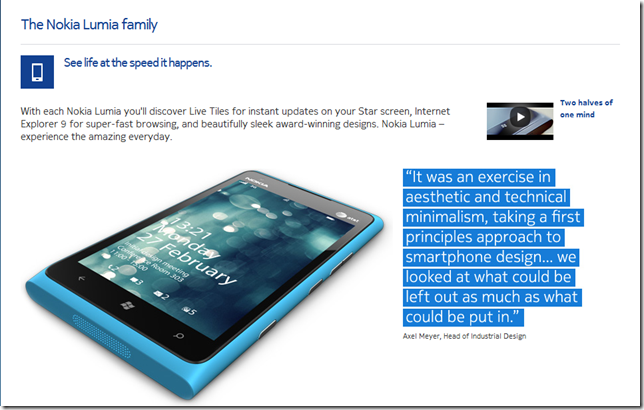