[important]The following freeware review comes courtesy of our good friend Mark (Marko) Williamson at FreewareBB. Mark has enjoyed a long involvement with computers and freeware, formerly as an IT expert and latterly as the owner of DCT’s recommended freeware download site FreewareBB.[/important]

A few years ago I remember helping a friend recover some space from his computer’s hard drive and in particular I remember wiping a considerable amount of music which belonged to his daughter because we thought it was no longer needed … after all, she had the data stored on her iPod touch anyway, right?!

A few hours after leaving my friends home, his daughter phoned me, almost distraught, explaining her collection of some 500+ had just been wiped from her iPod because she simply plugged in the device and “synced” it with the computer. iTunes has a nasty habit of only syncing “one-way” – this means if you remove the files from your computer, the next time you sync your iOS device, it will remove them from that too!! Unfortunately, I didn’t know that back then, but learned a valuable lesson that day and ever since I’ve more or less refused to become involved in issue’s concerning iOS devices and syncing problems, etc.

However, we now have a great new product available called PhoneTrans which, if had been available back then would have allowed me to restore the entire contents of her iPod back to the computer as if it had never been removed, and so much easier than the various methods described on the internet currently. From what I can gather, it is possible to restore your music from an iOS device back to your computer but it involves a fair bit of trickery, isn’t guaranteed to work and could ultimately wipe your iOS if you don’t do it right anyway, but with PhoneTrans it couldn’t be easier. If you downloaded most of your music from iTunes, then you can have the iTunes software sync and recover your purchases, but this doesn’t cover those tracks you have downloaded elsewhere or ripped from your favorite CD.

I just recently rebuilt my computer and thought it would be an ideal opportunity to test it out. On installing PhoneTrans I was prompted for the iTunes drivers which are part of the iTunes installation, so I just allowed the setup to carry on and install iTunes for me. After all that was done, I connected my iPhone to the computer in the normal way although nothing happened. So, I closed down the program, disconnected my iPhone and fired up PhoneTrans once again. I was prompted to connect my device, which I did: 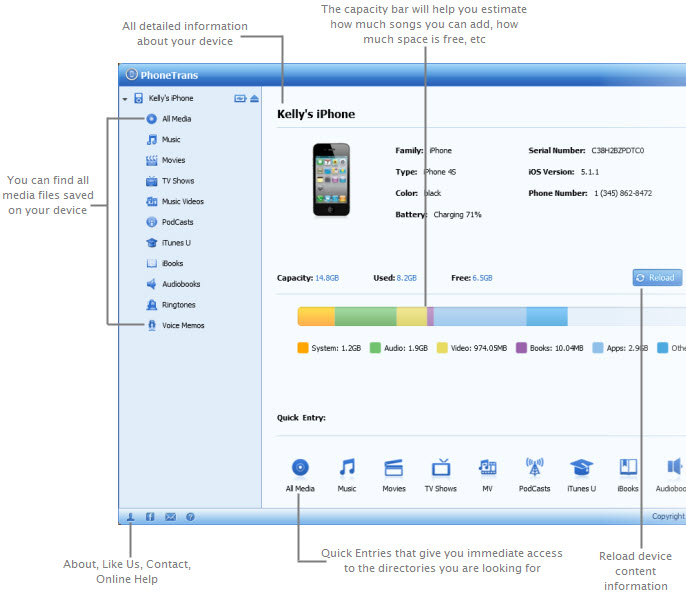 Almost immediately the program showed me info on my iPhone and I was able to browse to the “music” folder and see the tracks I had stored on my iPhone. I simply highlighted all the music and by “right-clicking” on them I could select “export” which then prompted me for a destination to export the music to. As I don’t have many tunes on my iPhone anyway, the process completed in a blink of an eye but for large music collections this process would inevitably take a little longer: 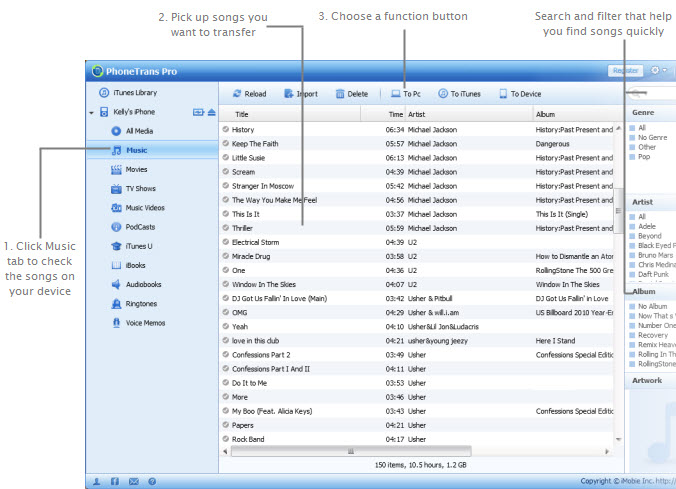 With that done, I was particularly happy and satisfied with the speed and competence in which PhoneTrans had carried out the task of recovering my music back to the PC and I know that there will be a lot of people out there extremely grateful that such a product exists.

I should mention that although the free version can effectively transfer music back to your computer from your iOS device, there is a Pro version which can offer more functionality such as the ability to use different iOS devices from the one, centralized interface which means mum, dad and the kids can all use one computer to export their music collections and even share them also as well as Wi-Fi transfers, restore music collection back into iTunes, transfer music library onto iPhone without erasing existing songs, and more.

If you simply want to be able to put your music collection back onto your PC from your iOS device after a hard drive crash or rebuild, then you need look no further than PhoneTrans as it offers all the functionality you could need to do this – and best of all, it’s completely free!!