On June 14th, Microsoft announced that Office had come to the iPhone. The Office suite — Word, Excel and PowerPoint — is available in an iOS app in the App Store.

‘Office Mobile for Office 365 subscribers’ allows you to view, edit and create documents. I think creating any lengthy documents on the iPhone would be pretty tedious but that is true of any app, not just this one. 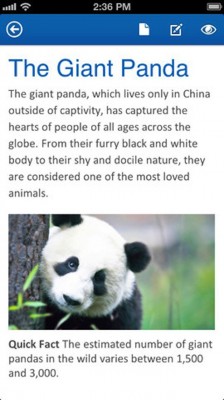 After signing into an Office 365 account, you can access, view and edit Microsoft Word, Excel and PowerPoint documents from anywhere. Office Mobile will keep all your content and formatting intact so the document still looks as expected when you’re back on your PC or Mac.

You can access your files on SkyDrive. SkyDrive, Microsoft’s cloud storage, provides 7 GB of free storage. You can also view and edit Office documents received in an email as well as email documents that you have created without saving them to SkyDrive.

If you have Microsoft Office 2013 installed on a PC, you will be able to use features such as ‘Recent Documents’ and resume reading.

While the app is free, an Office 365 subscription is required at an annual cost of $99.99. This allows you to install Office on up to 5 PCs and/or Macs and up to 5 mobile devices.

While the app will run on an iPad, it is optimized for the iPhone 5. This may be due to Microsoft wanting to provide the best Office tablet experience for its own tablets, the Surface RT and Surface Pro.

In two days, Office Mobile has jumped to #17 on the Top Free iPhone Apps list so there is a lot of interest out there. If you already have an Office 365 subscription, I think that this is pretty much a no-brainer.