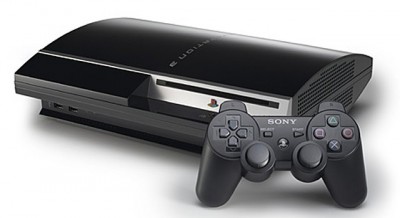 How to upgrade the PS3 hard drive

About four months ago my stepson’s Playstation 3 stopped working following a power surge, or to put it another way, the lights were on but there was no one at home.

Naturally, the lad was beyond consolation as he had years of games data on the machine and no backup anywhere.

My knowledge of game consoles could be written on the back of a postage stamp, so when funds allowed, we took it to a reputable specialist, waited for the diagnosis and we waited and waited and waited……

Meanwhile, his mum bought him a PS3 controller for his PC, so he could at least play games in a manner he was used to, albeit not his favourite games or on his beloved platform.

As the weeks passed, I had completely forgotten about the poorly PS3 and the kitchen table discussions soon turned to what if scenarios and it emerged that the lad was hankering after the new Playstation 4, which could be a problem because his collection of over fifty original PS3 games wouldn’t be compatible with the new console, which kind of put us back to square one.

Weeks later we discovered from the specialist that the machine was ready for collection and the diagnosis was:

For me that was a light bulb moment and when we discovered that the cost of rectification would be almost what the PS3 was worth, I decided to take over, the mission being to rescue the data.

What alerted me was the fact that the specialists had taken weeks to come to a very simple conclusion and since fixing computers is my daily bread, surely this couldn’t be much different to repairing a laptop. Surely not? 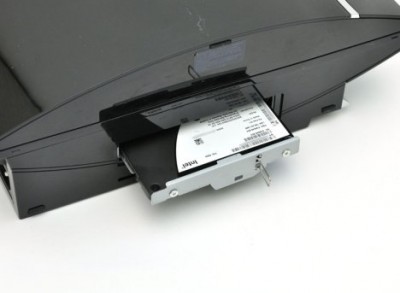 As it turns out, the Playstation uses a beautifully simple system of operation and Sony have sensibly built in the option for users to upgrade their hard drive, which is in fact a 2.5″ SATA laptop drive and in this case a Toshiba 80Gb drive.

What surprised me was that I could get no video signal from either the HDMI or A/V Component ports, having assumed that the firmware would at the very least allow for an on screen error message in a similar way to what a PC would do.

My first port of call was the ever reliable Linux, so I connected the faulty drive to a PC booting to Linux Mint, but the system couldn’t mount the disk, rendering it impossible to tell if there was any data left to recover.

Further investigation revealed that the PS3 uses a UFS2 256-bit AES-CBC Unix based encrypted file system on the hard drive, so I used UFS Explorer on a Windows PC, which revealed that the total disk space and free space were equal. Not an encouraging sign at all.

Fortunately I had a 160Gb drive lurking in a drawer and at first decided to format it in FAT32 due to some erroneous advice I had found on a Playstation forum and the only thing I learned was that FAT32 has a 32Gb format limitation, easily overcome by using a small utility simply called FAT32FORMAT which certainly added to the learning curve.

With the replacement drive now fitted in the Playstation, I further assumed that the system would find the hard drive, give me a basic message on the screen and allow us to move forward, but this was not the case.

Not a flicker of life on the screen. 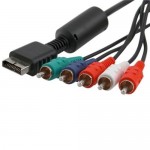 I then changed from HDMI to an AV Component connection to the back of the TV and after several reboots, we were back in business at last. The next step was to download the latest software (not to be confused with FIRMWARE) and copy it to a USB flash drive so that the system could install it on the hard drive and finally finish the job.

Sony has some excellent instructions on their very comprehensive website and hats off to them for debunking the myth that operations such as this are the black arts preached by the specialists of this world. 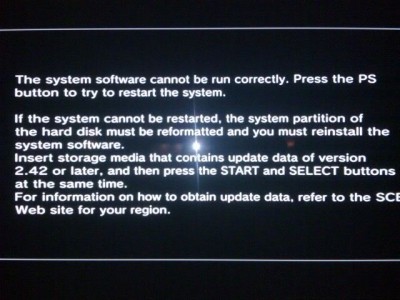 The most important consideration is the file structure when you save the file to the USB flash drive as it must be saved in a folder named UPDATE which is a folder of PS3, where both must be named in upper-case.

Once you start the process shown in the above picture, the system will find the USB device and copy the software xxxxxxx.pup file and install the game operating system in the normal fashion and you’re then ready to go.

This was an interesting exercise for numerous reasons.

I was very suspicious when told by the specialists after several weeks of holding onto the machine that the simple diagnosis was hard drive failure, when that conclusion could have been reached in less than thirty minutes.Furthermore, they quoted a price five times greater and for a smaller hard drive.

Software upgrade isn’t necessarily the same as a firmware upgrade. Firmware is normally associated with hard coded software on a CMOS chip on a motherboard. When you update a PS3 (legally) therefore, you’re not flashing the firmware, you’re upgrading the game operating system.

I scoured the net for information about this problem and believe me, there are some weird solutions being suggested for no video output, including turning the machine upside down, using a hair-dryer on the vents and even putting copper pennies between the GPU and heat-sink.

Other symptoms such as Red Ring of Death (RROD), Green Light of Death (GLOD) and Yellow Light of Death (YLOD) were not exhibited and the only conclusion I can come to is that the power surge blew the hard drive and probably the HDMI port.

Stranger things have happened with motherboards and power problems.