I use GoDaddy for hosting my three websites and up until recently, I was paying for three Economy level hosting plans. This didn’t make a lot of sense, so last month I upgraded the Argentina Expats forum hosting to the Deluxe plan which gives me unlimited websites,  subdomains, and storage for an extra $2 per month. The forum would remain untouched, but the other two sites would need to be moved over once those plans had expired. It so happens that my Compufix site hosting was up for renewal and somehow I needed to get the site contents over to the new Deluxe hosting without breaking anything along the way. I spent a great deal of time scratching my head and researching how this could be done and in the end, used FileZilla FTP to download the entire website and reuploaded it to the new hosting plan, making changes in MySql and other configuration files. Unfortunately, this didn’t work out and I broke the site, so I had to rebuild it from scratch having installed WordPress again through Installatron. Luckily, the site is fairly small so the rebuild didn’t take long and I was back up and running within a few hours. However, the site is in Spanish and I wanted an English version as a mirror with just one click.

There are various methods for cloning a website, including WordPress plugins and other black magic which I wasn’t entirely comfortable with. Then I came across a couple of guides showing how the cloning could be done with Installatron.

Installatron is a one-click web application installer that will instantly install and effortlessly manage top web applications like WordPress, Joomla, and Magento.

Installatron is included with most versions of cPanel, yet it’s not an application I’ve ever given much attention to until now. The first thing I did was to create a subdomain of Compufixshop.com, which I called english with the subdomain creation process naming it english.compufixshop.com.

This is a very simple process which can be done through cPanel. 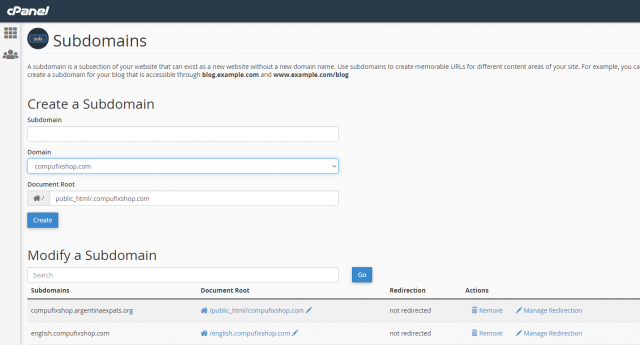 Once the subdomain had been created, I headed over to my cPanel applications and since I had used Installatron to install WordPress for Compufix in the first place, it was in the list.

I then clicked the highlighted clone button after which I was asked where I wanted to clone the website to, so I chose the subdomain I had created earlier.

At this stage, it’s very important to choose the correct domain or subdomain, otherwise, you run the risk of overwriting an existing website.

At the next page, I created a new directory of the subdomain, called it eng, hit the clone button and the entire process was completed in about two minutes.

The beauty of cloning through Installatron is that a new database is created, the WordPress configuration files are updated and there’s nothing else that the user needs to do to complete the process; so there was no tedious fiddling about in MySQL, for example. The WordPress login details are the same and once you click on the links provided by the finished clone, you’ll see the mirror image of your website in all its glory. For me, this was precisely what I had been looking for and with hindsight, I now wish I had found this simple solution a few weeks ago. But then, we all know about hindsight, don’t we?

Now that I had a mirror image of the Spanish version of Compufix I was able to edit the text into English and then add a menu button on both, linking to the alternative language site. One might argue that a plugin such as Polylang would have done the job just as effectively but my experience with Polylang tells me otherwise. It’s very time consuming and if the site is fairly static and doesn’t change very much, updating both versions manually shouldn’t be that difficult. It’s also important to note that both the existing site and the clone DO NOT share the same root directory. This is especially important if you don’t want both sites to sync with any changes that you make. I had made this mistake a few months ago when I created a subdomain with the same root directory of the main site. Fortunately, GoDaddy is now much more flexible in this respect.

All that remains is for me to add SSL to the cloned site and carry out the same procedure on my other website, The Last British President, for which the Economy Hosting expires in January, so I have plenty of time to prepare for that.  Once I’ve discovered how that can be done, I’ll probably share the result here at DCT.