In 2005, astronomers announced their discovery of the dwarf planet Eris. 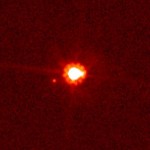 Eris was discovered by the team of Mike Brown, Chad Trujillo, and David Rabinowitz on January 5, 2005, from images taken on October 21, 2003. A dwarf planet is a celestial body in direct orbit of the Sun that is massive enough that its shape is controlled by gravitational forces but it has not cleared its neighboring region of other objects.