In 1959, Robert Noyce conceived of the idea of an integrated circuit, aka microchip.

It was at Fairchild Semiconductor, where he was the General Manager, that Robert Noyce invented the microchip for which he received patent #2,981,877. In 1968, Noyce founded Intel with Gordon Moore and Andy Grove.

Priced at $3,995, the Macintosh XL had 512 kilobytes of memory, expandable to 1 megabyte. The computer also has a built-in 10-megabyte hard drive.

In 2002, Sony began selling a PlayStation One with a plug-in LCD screen. 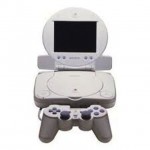 According to the press release, the 5” LCD screen gave “the popular gaming device more mobility so fans can play almost anywhere.” It was priced at $199.99.