In 1956, Jay Forrester was issued a patent for computer core memory. 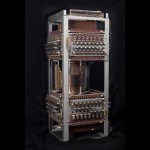 Jay Forrester invented core memory in 1949. It became the dominant form of computer memory in the 1950s, and remained in use until the late 1970s.