If you believe that you have as much right of having the same internet speed, availability, and privacy as anyone else, you are more than likely a fan of Net Neutrality. Net Neutrality was and is a founding principle that has been part of the internet and in theory ensures all internet traffic is treated equally by Internet Service Providers (ISP).

If, however you feel that some people should have special access to faster speeds, better privacy or even availability, then you might be a fan of the current net neutrality that was passed by the Trump Administration. For those in this category, don’t pop the cork and start celebrating just yet. ISPs like Verizon, Comcast, and Cox Communications may simply hoard profits from paid ‘fast lanes’ and other access fees. 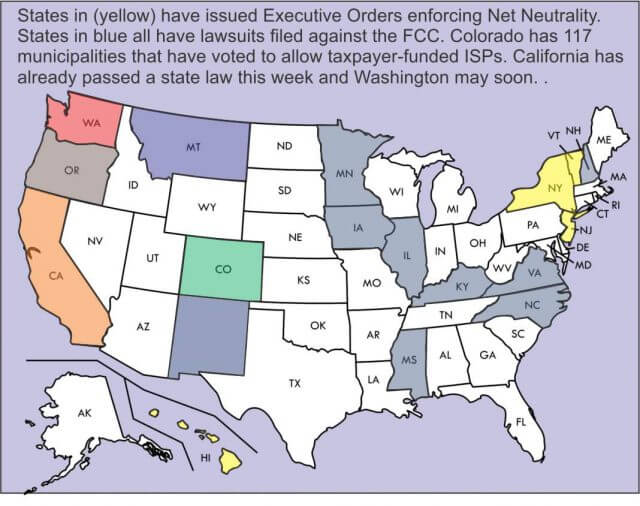 Montana became the first state to enact a law protecting net neutrality by blocking ISPs with State contracts from charging more for faster speeds to certain websites. This appears to have opened the door for states like California, Oregon, Vermont, Washington, New York, New Jersey, and Hawaii, which have all passed State laws modifying the Federal ban on Net Neutrality.

Why Should You Care?

Certainly, the impact it might have on you personally may be the only driving force to be for or against the topic, but the real problem goes much deeper than most people realize. The following image was inspired by Jim Hillier’s post,  “Net Neutrality ‘ Rules Passed – What That Means for You” from 2015, where he expertly defined the law’s effects. 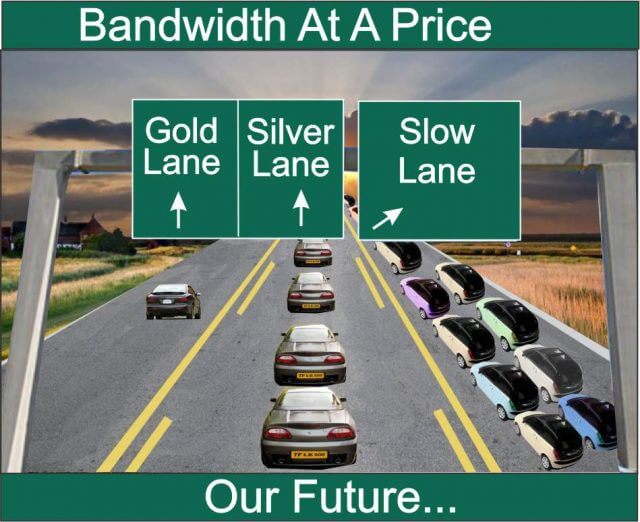 This is more involved than having your personal bandwidth restricted or even what you view and where you go on the web and having your history recorded. Trump’s FCC chair, Ajit Pai said, “Net Neutrality is hurting poor people.” His reasoning goes like this: If we ban Net Neutrality, ISPs will have more money to bring the internet to isolated areas in the US where poor people live.

There is certainly no proof for that statement– only his personal view. As a matter of fact, another commissioner, FCC Commissioner Mignon Clyburn said ISPs  “can almost direct what you see, or make

sure there are certain things you don’t see that is not in their economic or political advantage.”

My personal view is that ISPs like Verizon, Comcast, and Cox Communications may simply hoard the profits they will make from adding additional access fees and increasing the price for faster bandwidth. They may also use throttling as a weapon against competitive sites, a tool designed to boost overall profits from non-access businesses.

When the FCC voted last year to repeal Obama-era net neutrality laws, it opened a Pandora’s Box of potential problems. Imagine an ISP having the power to prioritize the flow of data to which you have access. A slightly higher premium paid to an ISP might mean that that provider’s message gets presented to you not only first, but more often, and they can “fast lane” that information to you while others get their messages slowed or throttled back, all with you not having a say in the matter.

The framework or template is already in place as some European countries are already charging for premium packages similar to current HBO, STARZ, and premium channels for TV. For example, in Portugal, you may purchase premium packages for Messaging, Social, Video, Music and email/cloud, with each running about $5.80 per package– imagine paying for Facebook and/or Twitter, and then paying extra just to have the ability to play subscription services like Netflix or HULU.

If this first step is successful, you can be assured that others will follow. Your mobile bills could dramatically be increased just by paying data access fees to content you currently receive for free. Let’s face it, these Social Media sites are already making millions on ads contained within their sites, and no one is seriously thinking that Netflix is hurting for money, but it is not necessarily them getting extra income, but your ISP. They are the groups lobbying the government to take your internet privileges away. They are your internet providers and with no rules can open and close any door they wish.

There are already several ISPs in the US that severely throttle your local data, and understanding if yours is one of them is not as easy as it should be. If your ISP is Bandwidth Limiting, a process of slowing down your connection if you have exceeded their bandwidth caps, you can check your bandwidth speed at different times of the month with the knowledge that later in the month your data might be closer to exceeding their limits. If indeed a speed test shows a lower speed at month’s end, you may be a victim of throttling. Additional information and links can be obtained in Richard’s article on Netflix speed test published last month. Without a doubt everyone can and probably will be impacted, and the hardest hit will be “gamers”, people that watch internet streaming videos, and cloud-based services.

I mentioned that the fight is not over and thanks to several states standing up for their citizens we may still have our day in court. I have to applaud all the states trying to lift the Net Neutrality ban on its citizens, and California’s version is sure to raise red flags on Capitol Hill. Jeff Sessions has already filed suit aggainst California Governor Jerry Brown after he signed and approved Senate Bill 822, the nation’s toughest net neutrality protections that are a step in bringing back Obama-era internet regulations that were repealed just nine months ago.

With 90% of Democrats and 84% of Republicans in favor of net neutrality, it hardly seems possible that Washington is actually representing the people that put them in office. There are over 200 million registered voters in the United States and our government has no problem ignoring more than 175 million of them. It would be natural for you to ask, who are they really representing?!

What can we do? US Senators urged citizens to make their voices heard by telling lawmakers and FCC Chairman Ajit Pai to remove the ban on Net Neutrality. It was just two years ago when four million Americans offered comments on the Open Internet Order. That is at least twice as many comments made on any rule before the FCC in history. Those who want their voices heard can email the FCC at openinternet@fcc.gov

10 thoughts on “Net Neutrality & You (The Fight’s Not Over)”