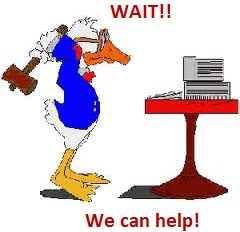 I am a senior citizen, officially deemed an ‘aged pensioner’ (what an awful term!). I’m happy to report though that I do still feel young at heart…. sometimes!

I’ve spent many years ‘fixing’ computers and my ‘clientele’ has grown from family and friends to friends of friends of friends of friends… well, you get the picture. Following in the tradition of ‘birds of a feather’, the vast majority of my clients are elderly… their computer proficiency ranges from absolute novice to wouldn’t have a clue. This has produced some quite humorous and often frustrating exchanges… patience is a virtue!

Anyway, here is a selection of those exchanges which I thought you might enjoy… I swear they are all 100% true:

After much similar to-ing and fro-ing; it turned out this lady had recently migrated from XP to Windows 7, and old documents in the now redundant Microsoft Works format had been transferred across. Of course, she didn’t have any software on the new computer which could open those old documents for her and allow her to print.

I arrived at this client’s house and sure enough, the computer was running like molasses. I was just about to commence the standard scans and general cleanup/maintenance workover when I noticed icons in the notification area signifying that two anti-virus programs had been installed. I chose what I considered the better of the two and uninstalled the other… problem solved! I duly explained the circumstances to my client emphasizing that installing more than one anti-virus product was a no no.

Now here’s the thing; three weeks later and I receive an almost identical call from the same client. I’m totally perplexed as to how this computer could have slowed right down again in such a short space of time. A quick trip to his house and guess what? Yep, two anti-virus programs installed again!! Un-bee-leave-able!

Finally, a word of warning about how unscrupulous techs might take advantage of some of these naive users:

A new client, one who had been referred through a friend of a friend, was having trouble with the display on her oldish XP machine. I quickly diagnosed a RAM issue so took out the 2 x RAM strips, blew out the slots with compressed air and cleaned the connections on the strips with a white spirit. Put the RAM strips back in place… all good.

The client then informed me that she had been regularly paying a tech guy $80.00 a visit to simply remove the RAM strips and then just put them back in again. This had been happening every 2 or 3 months over a period of roughly 18 months. So, this awful tech person had collected in the vicinity of $500.00 total for a repair job, which if done properly in the first place, should have cost around $80.00 maximum. He had successfully turned a one off fee into a nice little regular earner.

By the way; that episode occurred more than two years ago and that same XP machine is still going strong… display and all.