Does the increasing numbers of drones represent a threat to our privacy and safety? Should drone ownership and the use of drones be better regulated? 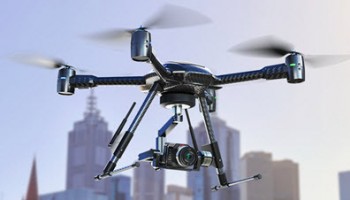 I wrote an article a while back about drones called (Super Drone! Are They Going Too Far?), in which I talked about the potential for drones to invade our privacy – seeing how they can go almost anywhere and video just about anything. Since then we’ve seen the largest Christmas sale of drones ever and the FAA now requires us to register them if we want to own one. This may make you think that all is good, but if you have been paying attention you might also see a scenario where this could turn out to be bad news in terms of privacy and safety.

With drones being so readily available to anyone, even my 10-year-old son, it’s quite likely these could be the next devices that our not so friendly terrorists use on us. Now, you are probably thinking, ‘Jason you are getting way too paranoid.’  And yes, there may be an element of truth in that, but I also think it is very important to point out these concerns so we can all be more aware and possibly a little safer. Someone has to be the paranoid or we may never consider the potentially ugly side of these new technologies. I’ll explain why I have these concerns and then you can make up your own mind.

We will start with a little event that happened in December 2015. Professional skier Marcel Hircher was just minding his own business in a skiing event when all the sudden the sky started falling – a drone fell right behind him, it was lucky for him that he wasn’t hit. This situation shows that with more and more of these drones flying around the more chances your day might turn out to be a bad one or even possibly your last.

Then there was the incident in February 2016 where a man crashed his drone into the 40th floor of the Empire State Building in downtown New York. 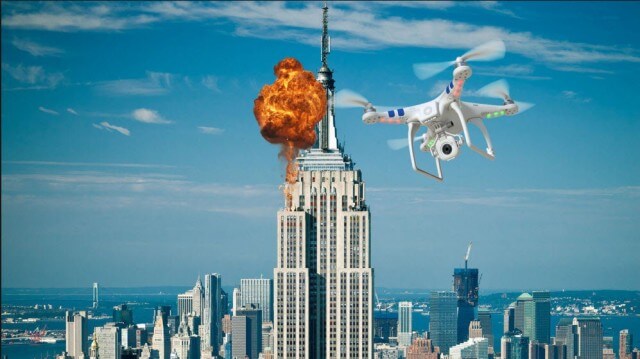 This one I think worries me even more than something falling out of the sky. If a drone can be so easily flown in downtown New York, how difficult would it be to simply strap an explosive device to it? Now we have a very easily accessible and adaptable device for someone to perpetrate a bad deed.

Drones are taking some amazing pictures in places where most of us would have a hard time getting to. As an example, in the video below this person flies his drone over Apple’s new Spaceship Campus currently under construction.

The reason I bring this one up is to emphasize how much easier spying on someone or something has become with the drone technology. Yes, the military has spying down to a science; but now your everyday Peeping Tom, business man, or nut job can easily afford to do it too. Business, Military and other entities are having a harder time hiding their secret projects or just normal secrets. When you can fly over almost any environment, that “No Trespassing” sign doesn’t mean anywhere as much as it used to. There is one upside to this, we can take some amazing pictures from angles that were not possible before without putting our lives in danger. See, I do appreciate the good side.

The last one I want to highlight is the near misses with our airplanes. This has become a major concern around the world over the past few years. With so many more drones being purchased the skies are growing more and more crowded. This is a very difficult thing for any government to regulate and monitor. The FAA does have rules but do they go far enough; if your unmanned drone weighs more than 0.55 lbs and less than 55 lbs you must register online. Anything over that you must register using the Aircraft Registry process – more details are available here UAS Registration. I haven’t heard of a drone hitting a plane yet, or vice versa, but with the increasing numbers of drones in the sky, I have little doubt it will happen in time. 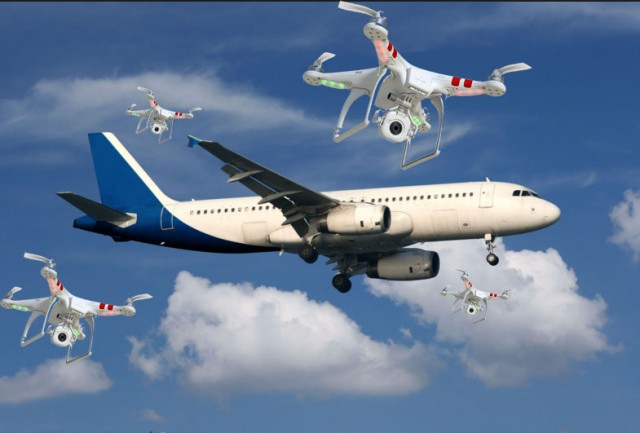 In my opinion, these examples are just the tip of the iceberg. We need to take a step back and slow down. The chase for the almighty dollar too often overrides the potentially negative effects this type of new technology can have on society. And, if history is anything to go by, it usually takes a catastrophic event before someone finally does anything about it.