It’s well known that since its initial release in October last year Windows 8 has been struggling to attract new users. Many reasons have been put forward, in my opinion the primary contributing factor is that Windows 7 was (is) a pretty hard act to follow – you can read more on that here: https://davescomputertips.com/i-hate-windows-8-it-faded-my-carpets/

Just last moth we reported that Windows 8 had finally overtaken Vista’s market share and, according to NetMarketShare, August has seen a further surge, by some 2.01%. Now a little over two percent may seem more like a short hop than a big jump but, in relation to the previous month’s figures, it represents a quite significant overall increase of almost 50%. 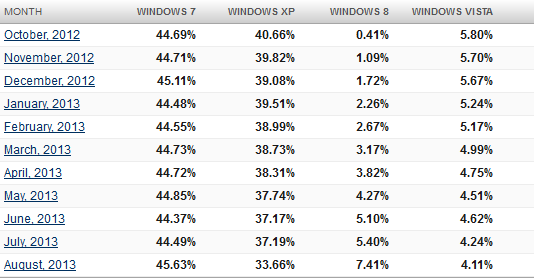 As you can see from the figures above, Windows 8 has been steadily but very slowly increasing its market share each month with most previous monthly increments well under 1.0%. Notice also an exponential decrease in XP’s market share – with XP’s end of support date growing ever nearer, I suspect the two may be intrinsically linked. Between now and April next year (XP end of support date), I believe we can expect to see a similar pattern emerging.

While we’re at it, let’s take a look at the breakdown of desktop browser market share for the big guns, again compliments of NetMarketShare: 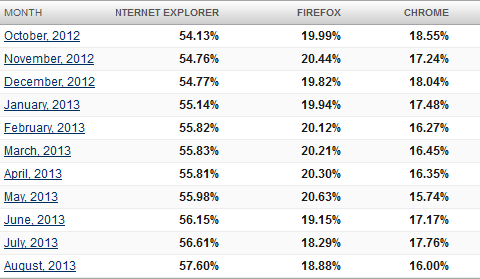 Looks like Chrome is losing the battle for second place, as you can see, Google’s browser has taken quite a hit during August – maybe something to do with privacy, the NSA, and surveillance? On the other hand, very much like Windows 8, Internet Explorer has been steadily but slowly increasing its market share over the past 11 months.

Steve Ballmer is gone, Microsoft has just purchased a large chunk of Nokia, maybe things are finally starting to look up for the Redmond giant and Windows 8… who knows!