It’s official folks, Windows 8 has finally overtaken Vista in terms of overall market share. While this might not exactly be a momentous achievement and Windows 8 adoption rates remain moderate, it does indicate that at least Windows 8 is steadily increasing its market share… a fact that would undoubtedly provide Microsoft with a degree of optimism as the launch of Windows 8.1 draws ever nearer.

Vista, of course, represents Microsoft’s most disastrous operating system ever, a benchmark for failure perhaps? So, now Windows 8 has passed that criterion I guess the Microsoft heavyweights would have breathed a collective sigh of relief. It also means that Vista is destined to retain its infamous rating, at least for the time being… most likely indefinitely.

Windows 8 currently places third among Windows operating systems, although still a long way behind Windows 7 and XP, and 4th in overall market share statistics. Most leading market research companies agree on the new order, although actual percentages do vary.  According to figures provided by StatCounter; Windows 7 remains on top with 55.39%, Windows XP comes in second at 21.3%, Windows 8 is now installed on 5.75% of computers worldwide, and Windows Vista has a market share of 5.44%. 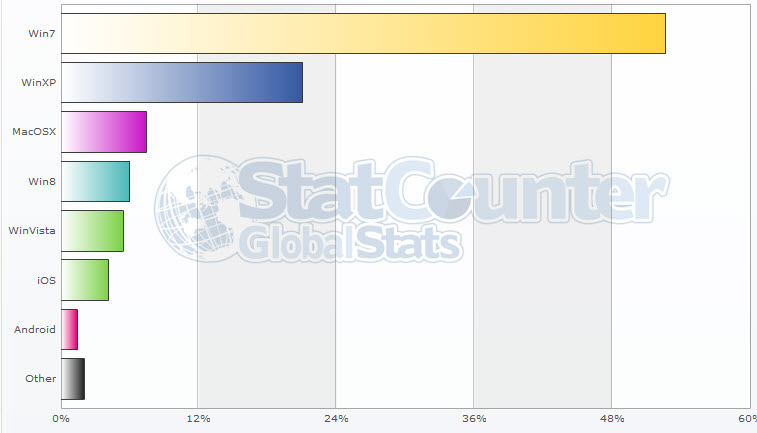 NetMarketShare confirms the position, but with a quite substantial variance in percentages:

Regardless of the percentage differential it’s obvious that Windows 8 is on an upward course, albeit perhaps a slow and steady climb. What’s the betting on how much longer before it overtakes Mac?

By the way: According to NetMarketShare, Linux currently enjoys a mere 1.28% market share, while StatCounter doesn’t even rate Linux worthy of a separate mention, lumping it in with “Others”… ouch!