Not too long ago, YouTube implemented a new way of streaming its videos. In the old days you would begin watching a YouTube stream and the buffer would fill up and keep streaming until it was full. Now, what happens is that you watch the video with a brief amount of buffer preceding what you are watching. This no longer allows you to jump ahead of the tiny buffer that is now provided.

That’s a great improvement over the older standards from the provider’s viewpoint, but it it isn’t worth a darn for the person who wants to watch in a variated way. Some people actually like to jump around when they watch a video and DASH doesn’t allow for that anymore.

Dynamic Adaptive Streaming over HTTP (DASH). Yeah, I know… yet another geeky thing. I’ll keep it simple here and tell you that DASH is a new streaming technology whereby the stream is delivered in small increments.

Wikipedia can give you a much more detailed explanation than I possibly could. Here’s a quote:

Dynamic Adaptive Streaming over HTTP (DASH), also known as MPEG-DASH, enables high quality streaming of media content over the Internet delivered from conventional HTTP web servers. Similar to Apple’s HTTP Live Streaming (HLS) solution, MPEG-DASH works by breaking the content into a sequence of small HTTP-based file segments, each segment containing a short interval of playback time of a content that is potentially many hours in duration, such as a movie or the live broadcast of a sports event. The content is made available at a variety of different bit rates, i.e., alternative segments encoded at different bit rates covering aligned short intervals of play back time are made available. As the content is played back by an MPEG-DASH client, the client automatically selects from the alternatives the next segment to download and play back based on current network conditions. The client selects the segment with the highest bit rate possible that can be downloaded in time for play back without causing stalls or rebuffering events in the playback. Thus, an MPEG-DASH client can seamlessly adapt to changing network conditions, and provide high quality play back without stalls or rebuffering events.

The way it used to work is that the whole video was downloaded ahead of the video stream that you were viewing. This allowed you to have the whole thing on your computer before you were done watching it. This is an advantage when you want to jump around to various parts of the video. With DASH, this can’t be done.

I have found a way around this conundrum and it is a simple add-on or script called YouTube Center.

The image you are about to see will give you some insight into what YouTube Center is capable of: 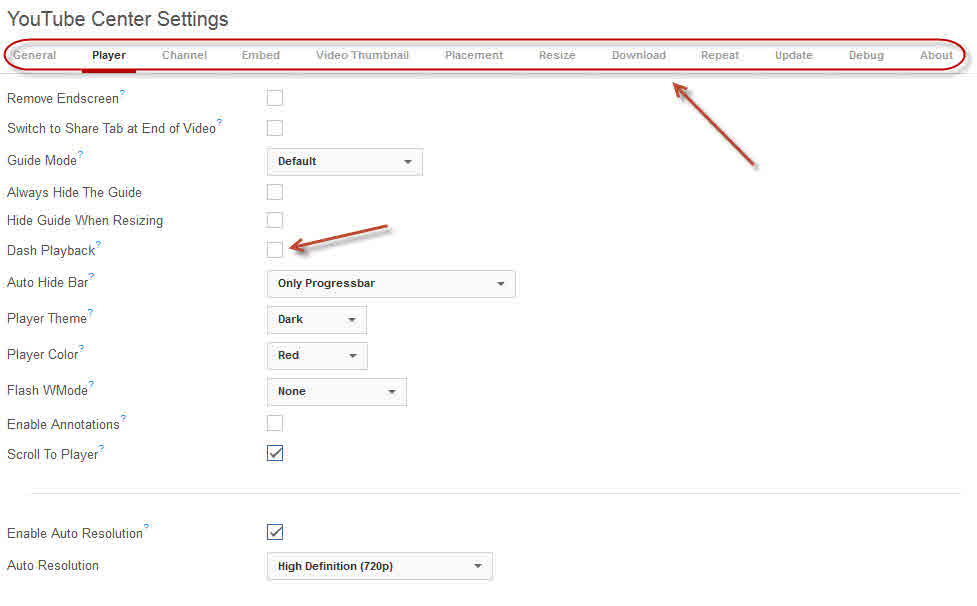 I have sent an arrow pointing to the Dash Playback check box. Disabling this will allow the full stream to which you have become so  accustomed.

YouTube Center, at least in my limited experience, is a simple Firefox add-on that will take care of a whole slew of problems, quirks, difficulties and various other disagreeable changes to your interface within the otherwise wonderful YouTube experience.

I’m sure you’ve noticed the huge number of tabs across the top of the above image. This should give you an indication of the variety of settings awaiting you. If you’re anything like me, this gives you shivers of anticipation. I realize simple minds are easily amused. Wait… You’re Laughing?!

If you don’t happen to be a Firefox fan, there are many other solutions available to you including scripts and plug-ins for other browsers as well. You can find this little gem at the GitHub Site. Drill down until you find the download you need.