Around 3 or 4 months ago, following its initial release, a new security freeware called TinyWall created quite a flurry of interest. I was just one of many who were drawn by TinyWall’s concept of delivering simple yet effective firewall controls. However, after installing and testing the debut version it soon became apparent that, while the basic premise was intact, the initial hype was probably a tad premature – the software was still a little raw and immature.

At that time I contacted the developer, Karoly Pados, and he openly admitted that TinyWall was somewhat underdone, in fact he was surprised that so many download sites had actually listed his freeware and by the intensity of interest in general. Karoly asked me to hold off on a review until such times as he released an updated version. Well my friends, after months of refinement and improvements, TinyWall 2.0 has finally arrived!! DCT readers are the very first to receive the news and it pleases me to no end to report that TinyWall 2.0 entirely lives up to expectations and delivers on all its early promise… and then some.

So, exactly what is TinyWall and why has it created such a stir? TinyWall is not a stand-alone firewall, it’s designed  to augment, harden and control the existing Windows Firewall in Vista and Windows 7. TinyWall offers an entirely different concept to traditional 3rd party firewalls – simplicity and ease of use – yet loses nothing in terms of efficacy. Karoly has explained it better than I ever could, so I quote from the TinyWall site:

TinyWall is a mere 0.98MB (or 1008KB) download. Installation is straightforward and 100% clean. The final installation screen explains TinyWall’s default behavior – to block access to most programs, excepting those which are traditionally expected to connect to the internet: 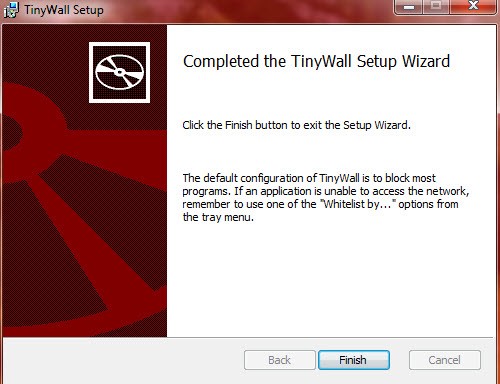 TinyWall places an icon in the system tray from which options can then be accessed and settings configured. Simply right click the icon to display the menu: 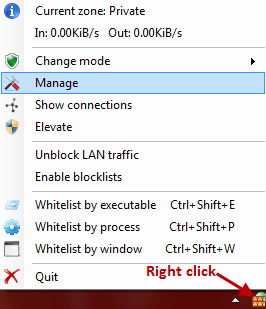 Start off by selecting Manage and you will be taken to the General tab in the Firewall Settings screen – *note the ability to add password protection: 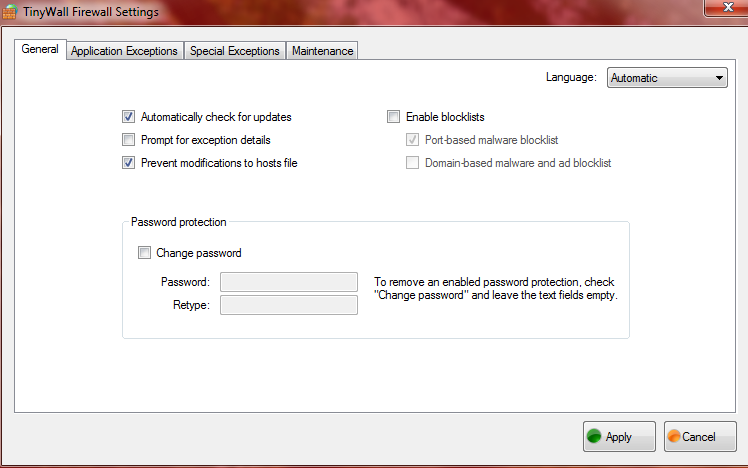 Now click on the Application Exceptions tab and you will see the names of all programs which have been automatically identified and added to the list of exceptions: 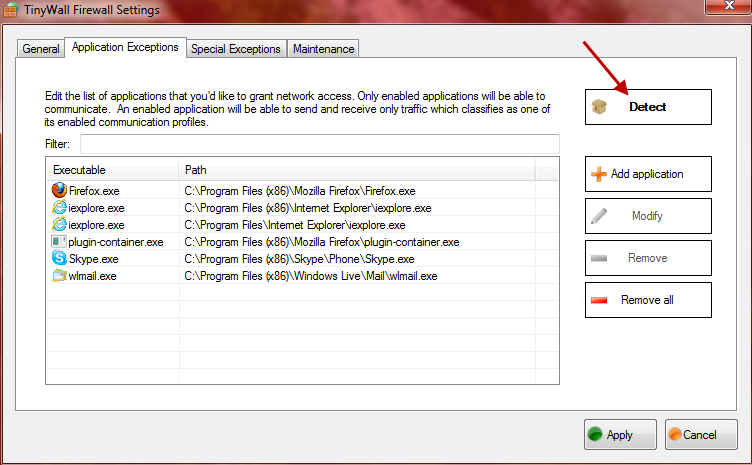 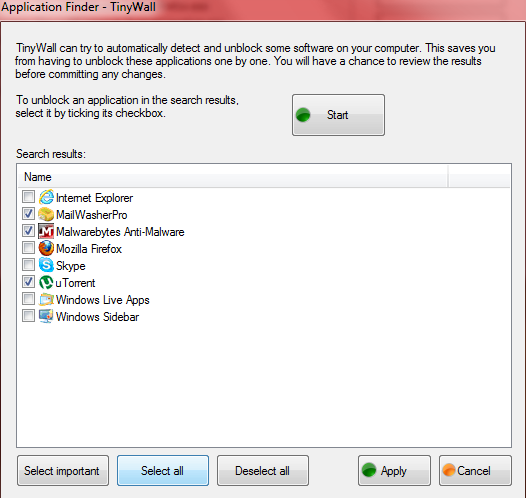 Simply place a checkmark next to each application you wish to add, then click Apply and Apply again. As you can see from the screenshot, I decided to add several applications to the list of exceptions, all of which I trust and know require internet access.

Click on the Special Exceptions tab to view further Recommended and Optional exceptions: 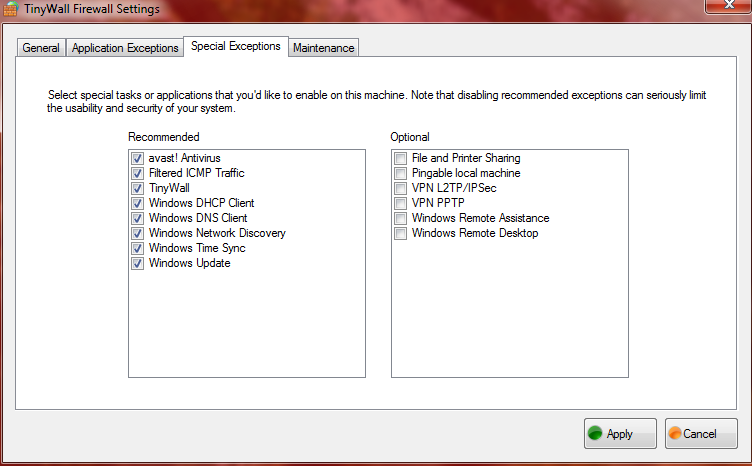 Remember, TinyWall does not keep popping up with questions about applications/processes attempting to connect to the internet. Access is automatically denied to all but the most obvious – but, it is very simple to add any trusted applications to the list of exceptions – TinyWall provides several very easy methods.

TinyWall also offers a variety of useful features via the system tray icon’s right click menu. Connections, for example, allows you to view a list all active connections, open ports, or blocked applications:

Change mode presents a selection of default behavior options – including allowing all outgoing, and disabling the firewall altogether: 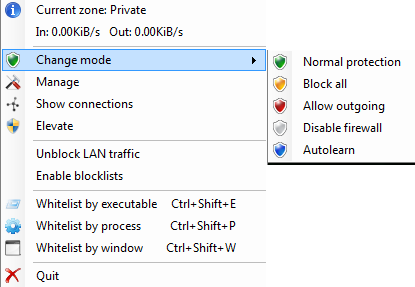 So, do I believe TinyWall is indeed the best thing since sliced bread? Well, that’s a very bold statement but – in terms of added security combined with the sheer brilliance of its effective simplicity – it sure comes close. Would I recommend TinyWall… heck yes!! Anyone looking for a light, simple and effective way to enhance overall protection should certainly check TinyWall out – TinyWall is now a permanent part of my security arrangements.

41 thoughts on “TinyWall: The best thing since sliced bread?”