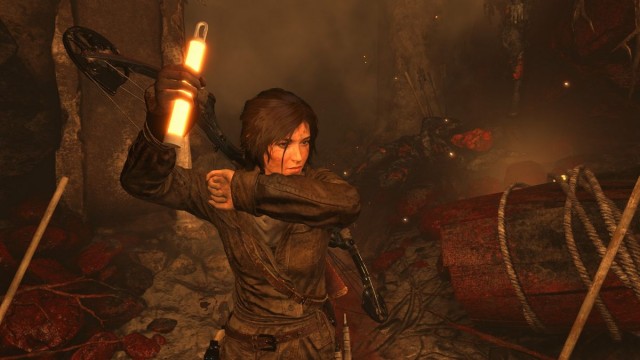 Rise Of The Tomb Raider

The PC release of Rise Of The Tomb Raider was akin to your Dad saying that Christmas hadn’t been cancelled after all and the timed exclusive with Microsoft’s Xbox in November was nothing but a bad dream, prompting all Lara Croft fans to take to the street Mardi Gras style in delirious celebration. 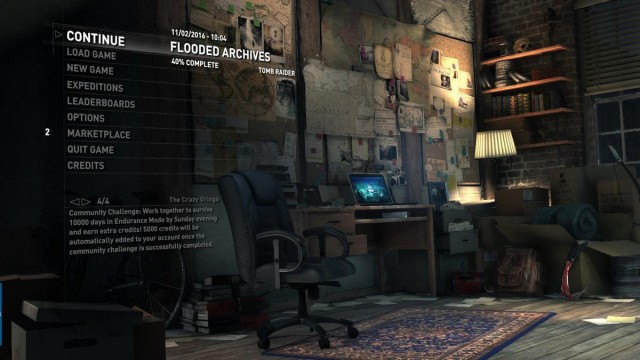 By today’s standards this isn’t a large game to download, weighing in at around 20GB, which took me less than an hour and no more than a minute or so to install in Steam on a Windows 10 x64 platform. I also decided to put the game on SSD so as to take maximum advantage of its native speed and I’m glad I did; the response time is phenomenal! 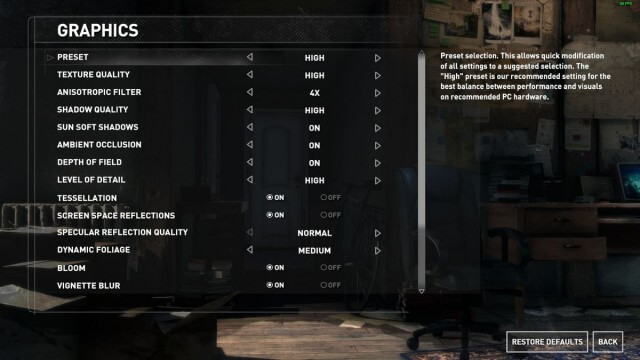 Usually the first area to visit once the game is installed is the graphics section and in this respect the developers have packed in as many options as gamers could possibly ask for and boy did they ask for more options! I like the PRESET selection which adjusts all the other settings pro rata, yet you can run the game on high or very high and are still able to turn off other effects to either maintain a smooth, lag-free experience or you simply might not like ambient occlusion or film grain effects. 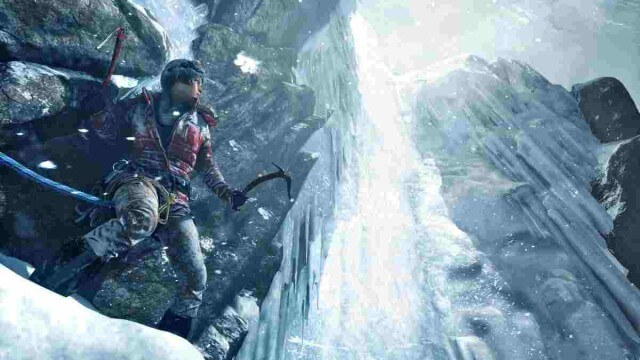 The opening of Rise is as dramatic as any Hollywood blockbuster, featuring majestic vistas, mouth watering landscapes, action scenes that draw you into the game immediately and once you get control of Lara, it soon becomes clear that we’re taking up where Lara left off about three years ago in Tomb Raider (2013). Naturally, we have new villains to contend with, some heavy issues with Lord Croft, Lara’s late father and some surprising revelations regarding the Croft family which give the story added flavor and an edge I wasn’t expecting. The most striking aspect of Rise are the graphics and particularly the attention to detail wherever you look. It’s clear that this is an area where they’ve done a serious amount of work and I found myself on many an occasion just stopping and staring at the scenery from many a hilltop, as I have also done whilst playing GTA V. The cut-scenes are some of the best I’ve ever seen in a game and whilst they have a tendency to interrupt the immersion and go on forever, in Rise they beautifully complement the story line and redefine next generation cinematics  entirely.

Lara can never seem to let go of her dead father and against all advice, is determined to prove his theories right at all costs in her search for the eternal life source. This quest initially takes her to Syria  and later to some abandoned Soviet installations in Siberia, where she bumps into a rival group of mercenaries who also seek the source of eternal life, so there are a great deal more murdering thugs around than Lara expected. To defeat this group of mercenaries, there’s a greater emphasis on stealth as the main tactic and, with the enemy AI being less than stellar, it’s pretty much a no-brainer garrotting enemies from behind whilst their comrades stand idly by some two or three meters away and don’t even seem to flinch when they hear a comrade’s neck being broken by the waif-like Lara. This aspect can make the game a little too easy at times, but there’s always an option to increase the difficulty level for a more challenging experience. It’s also worth noting the welcome absence of quick time events; those abortions of game play that can completely ruin an otherwise great game. What a freaking relief that they listened to us! 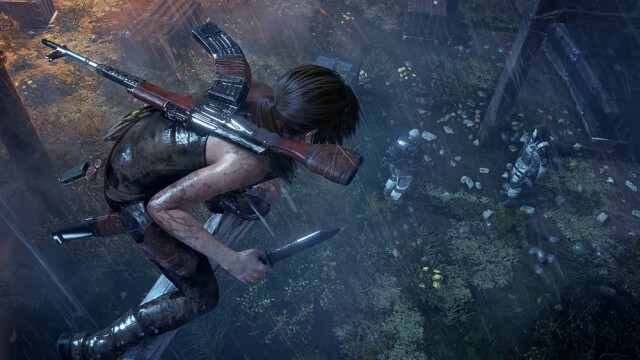 This aspect of the game has the feminists, and those of a politically correct bent, probably frothing at the mouth and pleading for Lara to visit her therapist urgently. No such luck; Lara likes nothing more than jumping off a high wall, landing on an unsuspecting enemy’s shoulders and driving her dagger through his throat, whilst simultaneously snapping his neck like a twig. In fact, her weapon count has been generously added to since her last outing. 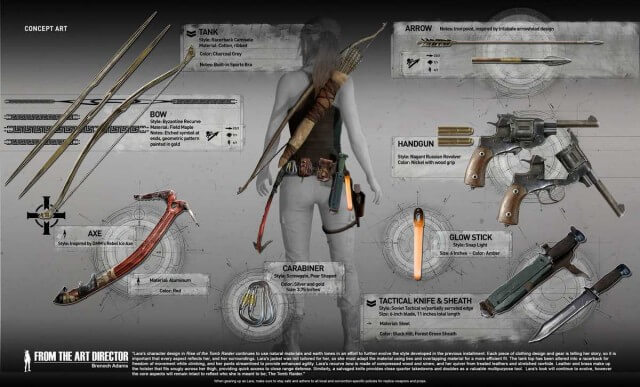 Add to this the ability to craft items such as cluster bombs, explosive arrows and the like from stashes scattered around the world, Lara can become a real force to be reckoned with, especially since numerous weapon upgrades can also be found, although on my first run through the game, I was so busy surging ahead through the campaign that I probably missed a huge amount of upgrades. 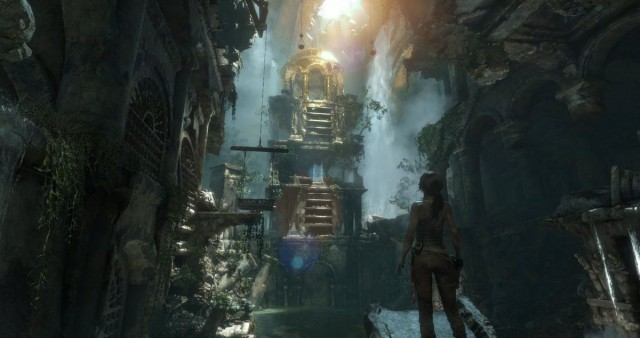 One of the biggest complaints from gamers on the last Tomb Raider (2013) was the lack of tombs and challenges and all credit to Crystal Dynamics for listening, for Rise includes nine tombs and loads of challenges throughout the game. It’s also true that the puzzles within the tombs are a little too easy for the seasoned gamer, so let’s hope the developers ramp up the challenges a little more next time round, especially as I found myself increasing the difficulty level just to get more of a challenge out of the game. Having said that, the level of detail and the truly magnificent settings more than make up for many of these shortfalls. 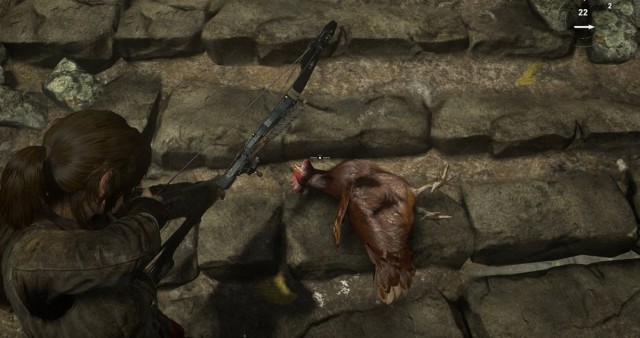 Fortunately there are some quirky little aspects to the game which add flavor, especially gaining XP points for chasing a chicken and catching it with your bare hands which would have been even more fun if challenged to roast our feathered little morsel over a spit at the nearest camp. So why chase the chicken? Why not?

Prior to the game’s release, rumors abounded that Rise would be one of the few games to support DirectX 12, the new game API from Microsoft, currently only available in Windows 10. This rumor turned to reality a few weeks ago when Crystal dynamics released a DirectX 12 patch, adding increased performance, better visuals and increased frame rates. 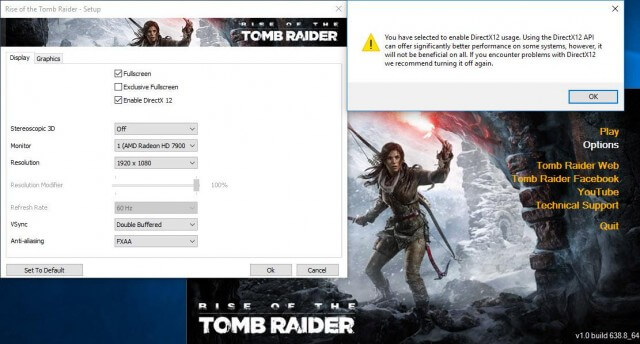 On the Phenom machine, I have to set the graphics at medium to get a decent frame rate of say, 40fps and selecting DirectX 12, even though the card supports it, crashes the game. I did manage to increase the frame rate by turning off vertical sync though. On the other hand, the FX 8320 combined with the GTX 970, runs the game at a smooth 60 FPS, even with DX12 enabled. This is a very demanding game on your hardware and is probably one of the reasons many gamers are upgrading, particularly their graphic cards.

Rise of The Tomb Raider is a vast improvement on its predecessor in so many ways. The improved visuals which are stunning, the game play which is exciting, the story line which has some believable characters and more than anything, Lara herself, who no longer resembles a cartoon character.

Would I recommend this game? Without hesitation and when I finished the main campaign, I started all over again just to see what I missed first time ’round. There aren’t many games today that give you that kind of replayability and value for money, so I highly recommend this game.

I don’t recommend buying the game from Windows Store, as that version is cut down with greatly reduced graphic options.