I’ve had a YouTube channel since January 2007 and I admit that I’ve neglected the all-important finer points for far too long in recent years. I always considered it as just a bit of a laugh, until I realised that it can be an income generator. That was until January 2018 when Google changed the rules and stipulated that 1000 subscribers and 4000 hours of watch-time would be required for monetisation which left many of us in limbo. On the other hand, this new rule has forced many of us to focus our attention on the condition and quality of our channels in order to make it attractive to visitors.

For example, I had videos scattered all over the place, playlists with videos in no particular order and videos that really shouldn’t have been there in the first place, so I decided to clean up my act by re-ordering playlists among other elements that needed tidying up.

YouTube can be rather convoluted to navigate, with the obvious not being very clear, so these screenshots should help you decide where to go first. 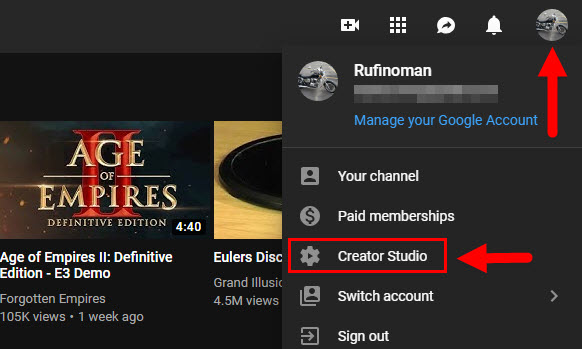 I found the best way was to go to Creator Studio after clicking your account avatar in the top right.

Then click on the name of the playlist, as above.

Hit Edit, which will take you to yet another area of the YouTube backend.

Then change the order in which you want the videos in that playlist to be shown to the viewer. It really is that simple, but it took me quite a while to figure out how to get to the solution, mainly because YouTube is often updated and improved, requiring a different approach to some of the backend work.

Whilst it’s important to present your latest content on YouTube, it also a good idea to let viewers know what your channel is all about. This then led me on to completely cleaning up my channel which I’ll describe in further articles. There’s also the question of creator privacy (we’re creators now, by the way). Do you really want your viewers seeing which channels you subscribe to? Which videos you liked? And do you really want the whole world to see that video you uploaded seven years ago after a crazy and raucous party when it seemed entirely like a great idea at the time?

Time for a Spring clean then. To be continued…

(Ed note: You can visit Marc’s YouTube channel at Rufinoman. He seems to like car racing and FPSs.)

5 thoughts on “How To Re-Order Videos In YouTube Playlists”