Let the internet do the legwork

I recently renewed my British passport using the UK Passport Agency’s online application service and since I was well within the expiry date and none of my essential physical characteristics had changed, the process really couldn’t have been simpler and I received my new passport through DHL in less than two weeks from posting the old one. Bear in mind that I live in Argentina, so I mention this small chunk of recent experience with online form-filling simply to illustrate how much simpler many red-tape style paper chases have become because of the internet. Had the internet not existed, not only would this passport application have taken a heck of a lot longer, but it probably would have entailed a fair amount of shoe leather, patience and postage. It’s also quite timely because if you haven’t noticed before, many renewal or expiry dates have the uncanny knack of appearing all at once, much like London buses or computer viruses. 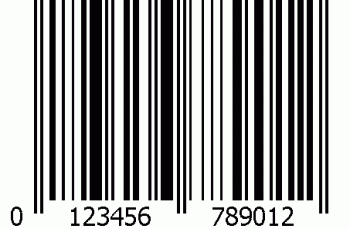 Some might argue that the internet has sucked the humanity from simple paperwork transactions, particularly with government departments, but let’s face it, the huge machine that is the state simply doesn’t have empathy stamped on its forehead does it? Which leads me quite nicely to another document renewal of a similar nature, but through an entirely different machine.

Since I’m a permanent  resident of Argentina I need an identity card (DNI), which is a component of Argentine life from cradle to grave in a similar way that a Brit feels to sailing the seven seas or strolling to the pub at opening time. In fact babies are issued with a DNI almost at the moment of birth, I’ve even heard allegorical stories of infants having their feet and hand prints taken on the ward. That may be a hangover from the military dictatorship when babies were routinely stolen of course, however allegorical it is.

For my part, I’ve had a DNI for about ten years and as a Brit it feels like an uncomfortable imposition since we don’t have such a document or card where I came from. To me, it’s simply a battered little booklet with the word FOREIGNER emblazoned upon it, to which I attach an insignificant amount of importance. 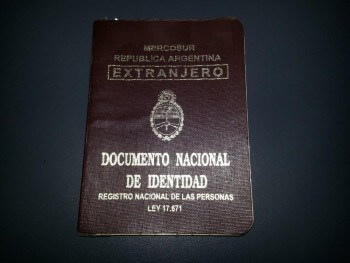 Now, those little booklets are being replaced in July with plastic cards full of biometric and other information, rendering the booklet obsolete, so I reluctantly decided that maybe I should put finger to keyboard and investigate, foreigner that I am. The government website is nothing if not helpful and even I could find my way round it, delighted as I was to find the lines ‘Foreigners and Argentine citizens can apply for the new card right here‘! But why did I get the nagging suspicion that all would not play out as smoothly as the picture was being painted?

So I clicked away, filled in all the required boxes, the beautifully simple captcha and hit send thinking, just maybe, this is a done deal and waited…till the pop up told me that this action is only valid for Argentine citizens, which I am not of course; I’m a foreigner. This quickly sent me into a trance of utter ennui which was shaken loose by the awful realisation that I would have to physically propel myself to the dark and forbidding third world office of a Physical Persons Registry, a division of the pinnacle of bureaucracy, the Ministry of Interior (Immigration). I’ve been there before hoping I’d never have to return, having left that portal with myriad Orwellian images flashing through my mind. It was grim then and I didn’t expect it to be any less grim this time round. I wasn’t disappointed.

By some happy chance, said office is also a marriage registry office, so when I arrived I was greeted by a small crowd of happy shiny people, smiling and laughing, taking happy pictures of the happy couple on a happy Friday. On entering the grubby doorway, I left the happiness to be greeted by the hangdog, downtrodden expressions of citizen taxpayers waiting at the gates of hell. As human debris shuffled from one desk to another, confronted by officious and hard faced government operatives, I knew the show had begun. 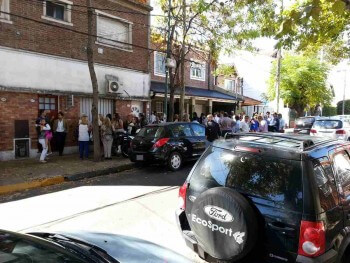 Since there were no signs or anything helpful to guide the unsuspecting and confused person, I approached a queue of others at what seemed to be a mock up of a customer service desk and I use that term as loosely as hemorrhoids. There were five people in front of me and I listened intently to the hatchet face operative as she gave her replies to the cowering individuals in the hope that it may give me some pointers. It did. In each case she told them that without an internet appointment, they would not be seen, never, ever until the end of time. I think it’s entirely appropriate to say that at that moment I said to myself ‘You’re f*cked!’

But I stayed in line and waited my turn, knowing that I had a secret weapon, the screenshots, compliments of Snagit and that would show them, yes sir! I greeted the operative politely, especially as the proceedings were being watched by the beady eyes of a well armed and overweight policeman. She in turn gave me the impression that she’d just swallowed a wasp and so I explained what had had happened when I tried to get my appointment online. Without even blinking or showing any visible change in her pulse rate, she delivered her well practiced line of, no online appointment, no deal. Of course, I remonstrated and reiterated, even tried to show her my secret weapon, at which she simply cast her terrifying gaze over my shoulder and shouted ‘Next!‘

I had become a non-person, less significant even than a mote of dust in that shabby little hell hole, so I took my leave in a simmering rage, taking care not to lash out at my fellow sufferers on the way back to the glorious sunshine beyond.

Once back in the safety of my shop I bashed again at the keyboard, visiting every single Argentine immigration portal that has ever been constructed, only to be greeted with the same response ‘Foreigners cannot get an appointment online and need to present themselves physically at their local registry office‘. Couldn’t be much clearer could it, which may explain why it’s called the Physical Persons Registry.

So I took some more screenshots, gave Snagit a hopeful kiss and hurled myself and the bike back in the general direction of hell before it closed its gates. The wedding party was still merrily snapping away, the bride looked glorious and I strode purposefully back through the government issue doors in no mood for frivolity.

On this occasion, different and younger faces were milling about behind the enquiries desk and I lunged towards it in the churlish hope that someone would listen. Indeed, it was a forlorn hope and no sooner had a I delivered my plea and received the expected response, the more-than-my-job’s-worth person of the female gender simply turned on her heels and strode away as if she had been proposed to inappropriately. 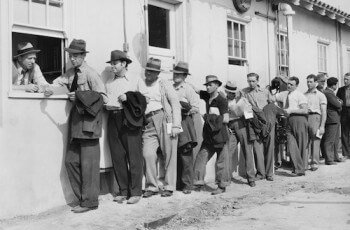 But I don’t give up that easily and next I managed to catch the eye of a scruffy looking clerk, pleaded my case again, at which I received the nonchalant and awe inspiring advice to go and find an internet café because ‘… that’s where we always send people like you who don’t know how to use a PC.’

I almost wet myself at that little nugget and as I was about to gouge his eyes out with a handy Bic biro lying on the counter, hatchet face returned from her coffee break, trying her level best not to recognise me. My well prepared preamble was stillborn and the rest of the encounter went something like this.’Can’t you read? Look over there on that wall and you’ll see the website you need to go to. Next!’ I looked over to the wall and saw a grubby A4 piece of paper stuck on with Scotch Tape, showing some web addresses in miniscule print and links hitherto not mentioned anywhere else. It was hopeless asking any further questions, so I scribbled down what I could, trying my best to smile at hatchet face, but only succeeded in delivering a look that, had I been on the receiving end, would have reduced me to a quivering jelly. 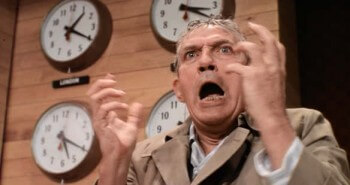 With steam hissing from eyes and ears, I made it back out onto the sunny street, fired up the bike, parted the wedding group Moses style and finally hit the keyboard again back at the shop in the hope that I wouldn’t end up responsible for some heinous homicide on the way home or start drinking turpentine solution by the gallon.

Check this picture out for an idea of where we might be in Part Two of this thrilling series.

5 thoughts on “How to Enjoy Online Bureaucracy – Part 1”