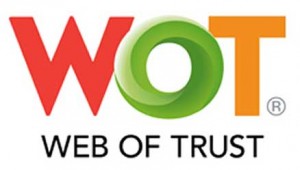 I guess most users would now be utilizing at least one of the common site advisory services to augment security when browsing. These services are generally installed as browser add-ons or plug-ins and help identify rogue sites per medium of a ratings system. Because of my work with DCT, I utilize them all, regularly and often – every link, download and site posted here on DCT is checked and double checked through the leading site advisory services and only those with the required Green ratings make it through.

There is no doubt these ratings systems can be a very useful guide when browsing, but only if they are accurate and equitable. Incorrect ratings are not only misleading they can also be totally unjust. There have already been several well publicized cases involving McAfee Site Advisor and the damage caused to site owners due to inaccurate ratings.

WOT (Web Of Trust) is one of the more recent advisory services and one which has quickly gained popularity. WOT’s ratings system is largely based on user input, an approach which I have always considered vulnerable and open to abuse. As WOT has grown so have I found its ratings to be less and less reliable; often confusing, sometimes just downright wrong.

I am experiencing the following scenario involving WOT more and more – (I use LinkExtend to check site ratings, LinkExtend incorporates 7 leading site advisory services including both WOT and McAfee Site Advisor):

I am checking out relatively new software, I go to the home home page and click on the LinkExtend icon to reveal the ratings. WOT rates the site negatively, it is the only one in seven which does – all the others give the site a Green rating. So I go to the WOT Site Details page. There are absolutely zero negative comments, nothing whatsoever to substantiate the negative rating.

Here is a typical example: Just today I was checking out a new freeware called PixBuilder Studio. I went to the home page and checked the ratings through LinkExtend as per normal. WOT gives the site a negative rating, both McAfee Site Advisor and Browser Defender rate the site Green. So I navigated to WOT’s Site Details page and there is not one negative comment nor anything else to substantiate the rating:
http://www.mywot.com/en/scorecard/wnsoft.com

[NOTE: WOT has now altered the rating for wnsoft.com to Green, virtually overnight it seems – hmm. Anyway here are two more examples for sites which show a negative rating without any explanation or apparent justification: HERE and HERE]

This is also occurring in reverse, although less frequently, where there are lots of negative comments on the Site Details page yet the site is rated Green. If a service such as WOT cannot provide predominantly accurate ratings then as far as I am concerned it is next to useless. Plus it is often doing a disservice to the sites involved, possibly damaging reputations based on what appears to be zero evidence. I have broached this subject with WOT previously, they reply but the response is always clouded in a mist of rhetoric.

If you are listening WOT, you seriously need to alter your methodology for rating sites – it is imperative that any negative rating be backed up with substantiating evidence – not merely because someone, somewhere anonymously clicked on a button.

7 thoughts on “Has WOT lost the plot?”