At long last the much anticipated stable version of Google’s 64-bit Chrome browser is available for download. According to Google, the 64-bit Chrome edition excels in three areas; it is faster, more secure, and more stable… but then Google would say that, wouldn’t they.

Both Mozilla and Google have been working on 64-bit versions of their browsers for some time now but, unlike Mozilla’s 64-bit Firefox (which seems to be destined for the scrapheap), Google has delivered on its promise. Google initially released the 64-bit build of Chrome through its public alpha testing channels back in June. Three months of testing later, and it appears the 64-bit build of Chrome has passed muster with the first stable version (37) now ready for the masses.

At this stage there doesn’t appear to be any option to upgrade from within an existing 32-bit Chrome so you’ll need to download the 64-bit installer, here: https://www.google.com/chrome/browser/?platform=win64 (make sure “For Windows 8/7 64-bit” is shown beneath the Download Chrome button).

The good news is that the 64-bit version automatically installs over the top of an existing 32-bit Chrome, although this means that the data then remains in the 32-bit orientated “Program Files (x86)” folder.

To make sure the installation (or overwrite) completed correctly and you are indeed running the 64-bit version: 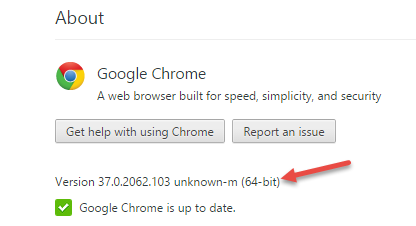 Data, such as bookmarks and extensions, will be carried over to the new browser, although there have been reports of a lack of support for 32-bit NPAPI plug-ins. However, with the exception of a few lesser-known plug-ins, most major plug-ins such as Silverlight, Java, and Flash have all been updated to 64-bit.

Chrome 37 also introduces DirectWrite support (Windows only) for smoother and faster font rendering, plus a number of other improvements and security fixes.