Longtime Avira fans will immediately notice their favorite anti-virus software has undergone a minor name change; “AntiVir” has been dropped from the title and Avira AntiVir Personal now becomes Avira Free Antivirus. Avira may have changed the name for the latest version of their popular software but don’t expect too much in the way of extra protection.

The download size has increased from 55MB to 79MB, but the extra 24MB is largely dormant. Apparently, the extra modules available in Avira’s commercial products are included in the free version but disabled by default. This is also reflected in the new interface where the additional components are now visible but grayed out – a constant reminder to users of what they are missing out on by not upgrading: 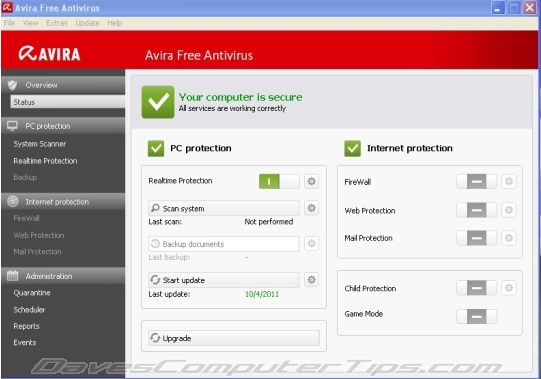 Disappointingly, the annoying popup which displays after the completion of updates remains part of the package but there is good news on the Ask Toolbar front. The toolbar is still bundled but installation is now disabled by default (opt-in). It remains part and parcel of Webguard though, so if you decline installation of the toolbar, the Webguard feature will be unavailable. I don’t see that as any great deal breaker, there are viable alternatives anyway; WOT and MSA just to name a couple – and they both include ratings for search results too.

Avira has touted some “big improvements” for the 2012 version but, on the face of it anyway, changes appear to be mainly cosmetic. It’s certainly easier to use; installation is simpler and faster, the interface is more intuitive and the scanning engine has also been improved. However, things appear to be pretty much the same under the hood. Yes, Avira’s primary protection remains strong and continues to fare very well in detection rate tests, but I would have preferred to see additional modules included to help strengthen overall protection and bring Avira Free up to par with competitors.