According to my stepson I’m old.

I’m old because I’m over forty, life is passing me by or already has, I am of little use to society and should seek help at a euthanasia clinic in Switzerland, Holland or preferably one within shuffling distance of where I currently reside. This rather odd train of thought came about following dinner the other night when said stepson was expounding on the utter uselessness of old people, or by his definition, anyone nudging forty and beyond. For nearly thirty minutes his mother and I were treated to this fascinating thought process which included the suggestion of farming us wrinklies out to communes and internment camps where we could harm nobody but ourselves. That process would be barely acceptable to him, but even more delicious would be a policy of mass extermination of anyone entering the so called twilight years, thus not burdening the state or families of said crumblies any further than they need to be. Some minutes later, having allowed this posture to go on a tad longer than was necessary or perhaps purely for entertainment purposes, we both stared at stepson and in unison asked ‘But what about Bernie Sanders?‘ It was round about then that his argument began to show some uncomfortable cracks, especially when he said The Bern is truly a man of the people and it must be so because the man himself had just sent him a personal message through Reddit, and how freaking awesome is that? 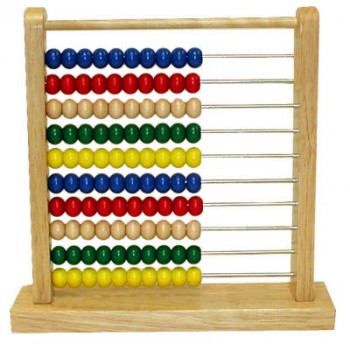 Honey, I broke the Internet!

Or, to take this argument to a near Orwellian level, we are being told to believe that old people and technology cannot co-exist because, even though they may be able to point one arthritic finger after the other on the keyboard, click like, or send on that Idyllic Country Scenes Powerpoint to their equally arthritic circle of forgetful friends, they simply know diddly about computers and technology, apparently. If I’m not mistaken, the Nazis took an equally selective viewpoint, often referred to as eugenics and we all know how that ended up. If you’re going to make an argument, it seems fair to take it to its logical conclusion, but only if you’re sure it stands up to scrutiny, which in this case, was looking decidedly flimsy. But then, extreme views are not the sole possession of dictators and religious fundamentalists and let’s face it, when you’re young it’s your job to be obnoxious, at least some of the time anyway. 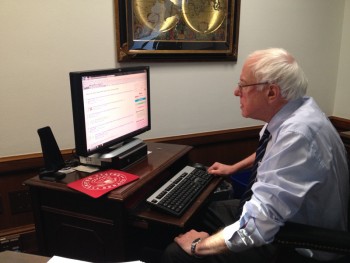 You’re too old for techno!

So what about Bernie Sanders I hear you ask. Well, as you know, that’s exactly what we asked, pointing out that the gentleman is seventy four years old, clearly in possession of all his faculties, knows how to use Reddit and Twitter and is in the running to be president of the USA no less. I was hoping that my cunning riposte might floor the lad, but no. It turns out that Bernie is an exception to the rule and a social media God, not seen since Obama’s Facebook election all those years ago. I also pointed out that Mr Sanders likely has a campaign team of hundreds scattered about the country and it’s possible that all those Tweets and Reddits may not have been sent by his very own mouse or iPad at all, but it does conjure up a delicious image of the man sitting in an understairs cupboard very much like the picture above, sending you and I personal messages and begging letters between afternoon cucumber sandwiches and dinner on the porch. 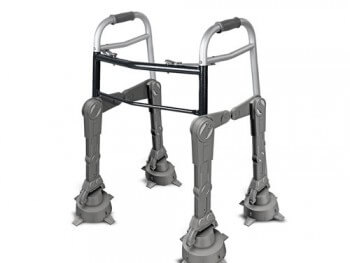 Having put Bernie Sanders to bed for a well earned rest, we moved rapidly on to my de facto mother-in-law whose crime, it appears, is to know absolutely nothing about computers and technology, which is of course inexcusable for anyone at the age of eighty who only made physical contact with a keyboard and mouse some three or four years ago as a result of a government sponsored programme for pensioners, by the way. To say that she waded into Windows with a devil-may-care attitude would be an understatement and watching her forward those Powerpoints to all her doddery friends, including me oddly enough, was and still is a frightening sight. On the other hand, whilst I’m still on the right side of 60 (just) and still sport fewer silver hairs on my head than the lustrous and youthful native colour I was born with, I’m still hoping I won’t be dragged out of my bed one dark night by some rough looking thought-policemen and consigned to the silver surfer graveyard, a place where my stepson believes I belong along with the rest of my ilk. 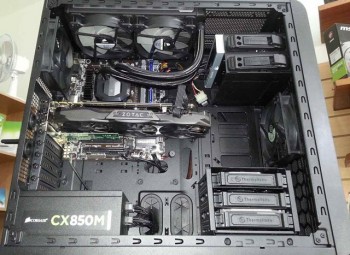 In the meantime, I shall scurry away to my man cave, as I dare say many of my old crony friends will, continue with my thesis on The Theory of Nothing, build another luxury gaming computer for anyone who can afford to pay for it, conjure up an article loosely related to Microsoft spyware, fire off a fluffy kitten Powerpoint to the mother-in-law, ponder for precisely ten seconds on what this particular teenager has contributed to our world to date and then wonder what all the fuss was about.

9 thoughts on “Are Older People Useless With Technology?”