As the first quarter of 2014 has now drawn to a close, and considering XP’s end of support is nigh, I thought it might be timely to check out current market share figures and see how much things have changed over the past 12 months.

As usual, the source for these statistics is the well respected NetMarketShare: 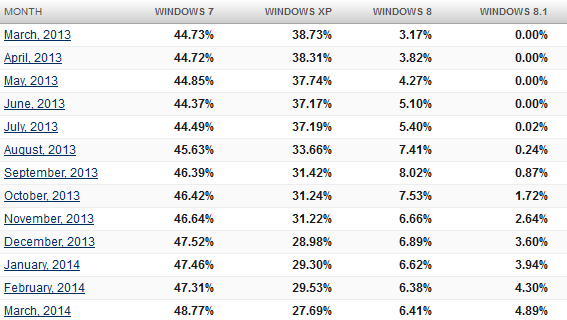 Nothing overly surprising there, but it will be interesting to see how those figures change over the next few months following XP’s end of support. Comparing current numbers to those in June or July should provide a fair indication as to which of the two newer operating systems is receiving most favor with migrating XP users.

XP’s current 27.69% market share may appear to still be quite healthy, but the fact is, since the end of March 2013 a third of XP users have abandoned the aging operating system. Not only does this represent a significant number, that trend is almost certain to accelerate over the coming months.

Mind you, statistics surrounding XP, especially those pertaining to comparisons, can often be distorted due to the extraordinary age of the operating system and its subsequent wide spread use. Plus, there is bound to be an appreciable core of XP diehards out there who refuse to change no matter what, at least for the time being.

Chrome Hits 2nd Spot in the Battle of the Browsers

It was towards the end of 2011 when the pundits were predicting that Chrome was set to overtake Firefox some time during the first quarter of 2012. Some 2 years on and Chrome has indeed finally managed to slip past Firefox into second place in desktop browser market share… albeit by a slender margin. 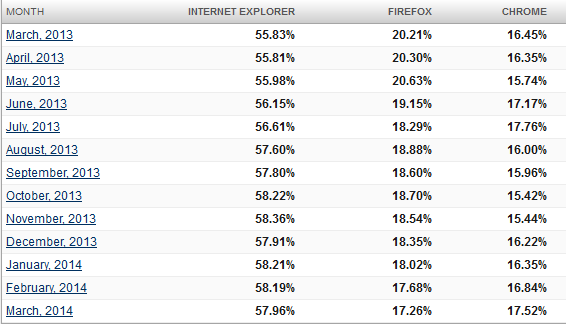 As you can see from the figures in the screenshot; it’s not so much that Chrome has gained a lot of ground over the past 12 months (a mere 0.39%), more that Firefox has lost ground. Apparently, Mozilla’s decision to adopt a rapid release model for its Firefox browser, and the changes it brought with it, have not proven too popular with users. One thing for certain, it appears Internet Explorer is set to remain top dog for quite some time yet.