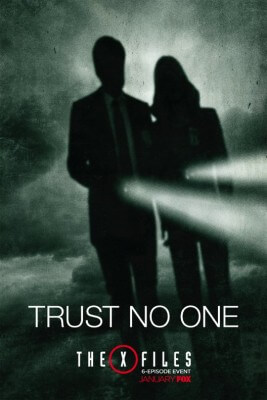 As an X-Files fan from the very beginning, it was a complete treat to watch the recently revived six-episode event of one of the best sci-fi series ever. There was just so much to love: the chemistry between the two FBI agents – one a believer in UFOs and paranormal everything, the other a believer in faith and science; the creative story lines; the pervasive humor blended with sci-fi and horror themes, the terrific writing – you get it – I’m a FAN. (Seriously, I went to the only X-Files Convention in NYC in the nineties – before Comi-Con was even a thing.)

Some of what I appreciated about the redux version included all the references to Edward Snowden, the government conspiracies as they relate to today’s intricate and ubiquitous technology, and the privacy issues. In one of the new episodes I particularly enjoyed catching Mulder working on his laptop while fiddling with what looked like a piece of worn duct tape over the laptop’s webcam. YES! This cracked me up! Because, wait for it, I DID THIS TOO. The only difference is, I just have a piece of cardboard taped over my webcam.

Keep I mind, I don’t usually have my laptop open, so the fear of webcam invasion is relatively minor. That said, one day when I did leave my laptop open while it was slogging through some updates, I heard what I thought was a camera click – the same kind that’s made when I take a picture with my laptop’s camera app. I checked to see if the camera app was somehow left running and it wasn’t. Then, even when I wasn’t thinking about it, I started hearing that camera click sound at different and inconsistent times while using my computer. I already knew that it was possible for someone to hack your webcam; even when it’s off, so I covered up that bugger pronto.

One of my friends, who works with computers regularly, even mocked me for it. And because this type of privacy-play often begs the question “What are you doing that you don’t want someone to see?” I usually counter with “It’s the equivalent of someone peeking in my windows while I’m at home. Doesn’t matter if I’m baking a cake. It’s creepy and it’s an invasion of my privacy.” Period. End of discussion.

While doing some research on webcam hacking I came across so many reports of this happening to unsuspecting victims. Yeah. It’s a real thing and apparently, it’s easy. Here’s a link to an earlier DCT article: Security Tip: Turn Your Webcam OFF When Not In Use, which, by the way, ends with the wonderfully cheap idea of just covering up your webcam if you’re worried.

Hey, am I just being paranoid here? Oh HELL NO. If Fox Mulder is doing it, I’m fine with it. Just call me Careful. How about you? Are you getting the duct tape out yet?