The demand on today’s internet bandwidth is greater than it ever has been, with Pandora, Spotify, Netflix, Amazon Prime, Hulu 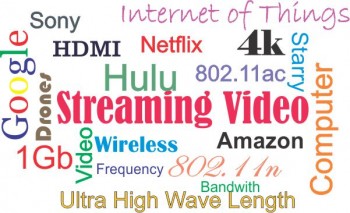 and a host of others filling the Ethernet with an incredible amount of data.

This data is being delivered primarily through DSL and Cable which according to Cisco, one of the biggest network companies, is not even that reliable. It claims that right now internet outage is experienced by 43% of the population at least once a month.

If you rely on only streaming video, that kind of interruption can be a problem. I live in a community where my average client has between 1.5Mbps and 15Mbps of throughput and interruptions happen more frequently than that. I suspect many people are in this situation.

With High Definition video and the expectation of streaming 4k, internet bandwidth will soar beyond what many of us will be able to cope with. 4k streaming is already being delivered by Sony and Netflix but unless you have considerably more than 15Mbps service that nasty “system is buffering” message might be most of what you’ll see.

In today’s world, most of us have moved on from phone modems to Satellite, DSL or Cable.  Some of us are even lucky enough to have fiber optic connections delivering a solid 1Gig of throughput. However, unless you live in a relatively large community, you may not have access to reliable high bandwidth providers. So what are our options?

Is Wireless the Future

Starry Wireless just announced a possible solution with their 1GB wireless internet service. Their service would deliver this data using “millimeter wave band active phased array”. Basically, they plan on using super high frequency wavelengths where data can be pushed through at very high speeds. As promising as this sounds, there are a lot of drawbacks to implementing this to the public and just how effective it will be won’t really be known until they roll out their first trial service in Boston then onto an additional 14 cities.

For starters, you would need to purchase their $349 receiver. The receiver comes with a built in antenna that just hangs out of a window. There will be a monthly fee as well but Starry has not been too forthcoming with the actual cost. They do claim that it would be considerably less than conventional cable rates. If I thought I could get 1GB service at a fraction of what I am paying for 50MB, the cost of the receiver, while steep, would not deter me. I would do it in a heartbeat.
However, there is more to the story, first of all your receiver must have “Line-of-Sight” to the transmitter. That would mean an incredible number of transmitters would have to be in place. Secondly, the service itself would be affected by the weather – heavy rain, thick clouds, and snow would almost certainly disrupt the service similar to the way satellite TV transmissions are affected (just how much of a disruption is not known at this time). Even that might not be a major problem for streaming video. A two-hour movie could be downloaded in just a couple of seconds. If you have access to a storage device to download and save the video, you could watch it offline with no interference, providing Netflix and other services would allow storage of any transmissions.

Not to be outdone, Google wants to test 1GB wireless using drones. They are currently testing devices in New Mexico. Even with the use of drones, I believe the system will still have similar limitations to the Starry device simply because it is wireless. You will still need line of site and inclement weather would also present a problem. In its application to the FCC Google said it will be using frequencies between 910 and 927MHz and another between 2.4GHz and 2.424GHz. this is different than their project Loon, released last year, which uses high altitude balloons that would suspend around 65,000 feet.

Too Early to Call

Just how effective any wireless internet service would be is still (like Google’s balloons) up in the air. Two wireless companies have already tried and failed and I don’t expect to see it anytime soon in my area. However, with companies the size of Google throwing money at the problem, it gives me hope that it will eventually become a reality.

There is no doubt in my mind that wireless internet providers will eventually make it happen and with companies like Sony pushing 4k streaming I think it will happen sooner than later. More and more of us are watching Netflix and other streaming video, if you don’t live in one of the larger metropolitan areas, wireless may be our only hope.

8 thoughts on “Will Wireless Internet Be the Next Big Thing?”