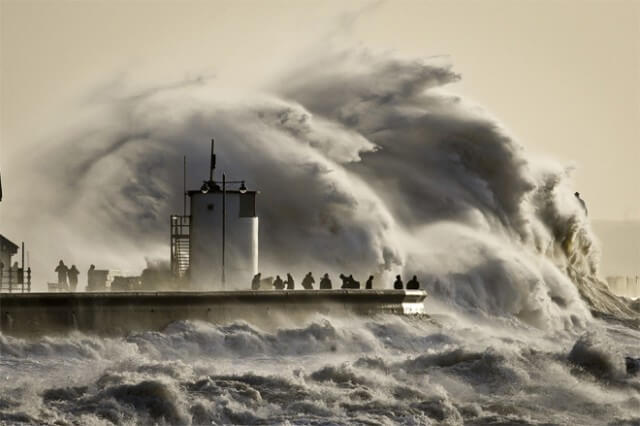 Ever since I was pressed-ganged by my father to crew for him in the early ’70s and spliced the mainbrace across the English Channel to France, I’ve had a fascination for weather. Of course, when you’re sailing a small boat across a stretch of sea, the weather forecast is more of a necessity than a passing interest, so, long before the Internet was invented, the most reliable source of weather forecasts in the United Kingdom were issued by the Met Office through the BBC on Long Wave and of particular interest was the Shipping Forecast issued at very precise times of the day which, come hell or high water, were listened to and annotated religiously. We also made new and interesting friends on landfall wherever we were as the simple question ‘Have you heard the weather forecast?’ passed from one sailor to another, not only breaks the ice, but is usually followed by a suggestion to retire to the local hostelry for medicinal purposes. It’s remarkable how were able to translate a spoken shipping forecast into a synoptic chart and predict roughly how the weather may unfold for the coming days, based purely on positions of low and high pressure areas. 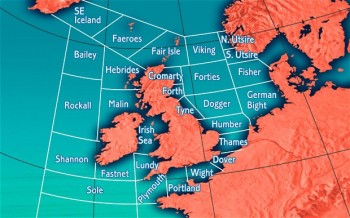 I have very fond memories of being huddled down below at the dimly lit chart table, scribbling frantically on a chart like the one above, whilst the rain pelted down on the helmsman above me, when in fact the shipping forecast had predicted a fine, dry and sunny day. But then that was part of the unpredictable adventure we all loved and only ever got caught out a handful of times, fortunately.

A mainly sunny day, with showers at times

After a ten year sabbatical, I returned to the seas in 2001 and weather forecasting had changed forever because of the Internet, albeit rather slowly. Whilst we still tuned in to the Shipping Forecast on the transistor radio, we could hook up the Nokia to the laptop and as if by magic and a little bit of GPRS tinkering, we were on the Web and downloading the very latest synoptic charts and sometimes even satellite images if we held the phone at just the right angle. 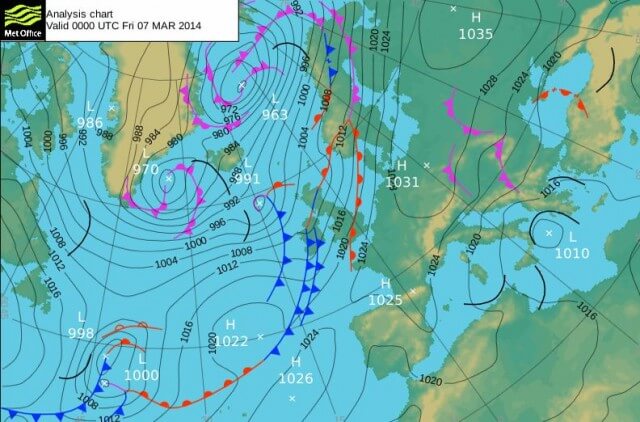 Alternatively, if the local pub had a TV, you could catch up with the forecast with a pint of ale and a roaring log fire, but then TV weather forecasts are a little like watching cartoons or if you’re lucky enough to live in Mexico, a Latina style beauty contest and who cares about the weather anyway? Well now of course, I don’t need to tell you how much information is in the palm of your hand and you can now get it all beamed to you wherever you are on the planet, whether you’re organising a bowls match, a Women’s Institute garden fete, a hike up a large hill or a barbeque round your mate’s house. I mean, what you don’t want to have to say is, rain stopped play, do you? Having said all that, wearing a mini skirt when delivering a freezing forecast is a little cruel, but you know those Italians. 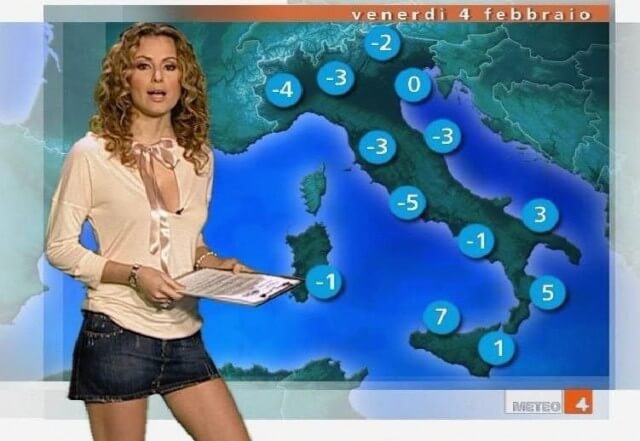 Weather forecasting used to be the sole domain of the Ministry of Defence and in many countries it still is, however some really bright aficionados of the science have burst through on the Internet to give us more accurate and detailed forecasts, the like of which you won’t see on your average Fox News weather forecast, ever. Many of these these weather sites encourage fellow enthusiasts to report their own local weather conditions, many of whom have electronic weather stations installed at their homes which are linked to their computers, enabling the forecasters to build up a more accurate picture of current conditions. This is particularly useful in forecasting thunderstorms and in turn tornados, which are notoriously difficult to predict. In fact, thunderstorms themselves are elusive, almost will-o’-the wisp phenomena whose beauty can seemingly evaporate at the drop of a hat. This image below represents what can happen and did happen on 24th December 2012 in Argentina (one of the most thunderstorm prone countries in the world) as pictured below, when the conditions were ideal for storm formations and the temperature hovered around 46c (115F) thermal sensation, with a cold front rolling through from the south west. Curiously it turned out to be a total non event with neither a drop of rain or a puff of wind. The weather, like the sea, can be a cruel mistress at times.

Indeed, there are some very clever people around and a year or so ago, purely by chance, I came across possibly the most stunning real-time world weather map you could possibly imagine at earth.nullschool.net. Not only is it scientifically brilliant, but it’s also quite mesmerising as you imagine yourself flying across the oceans and continents. Here’s a quick glimpse of one I prepared earlier.

When combined with Google Maps, satellite imagery and NOAA’s global forecasting system, you really can get a very accurate picture of what’s occurring outside your living room and Weather Underground is definitely the place to go for real time weather monitoring. This image was taken off WU and is of another thunderstorm about the size of Spain which was quite a spectacle. The arrow is pointing to where my house is. 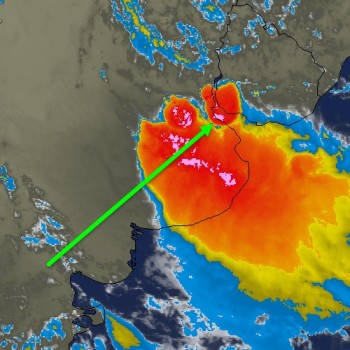 Real-time lightning is an impressive site and like WU, you can zoom in and see if your town will be affected, like this shot of storms in southeast Georgia, USA. the other day. 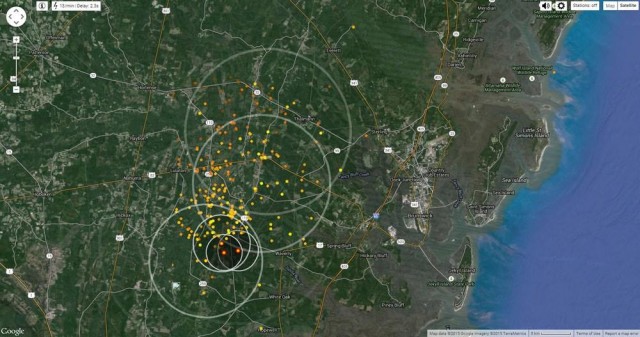 Are you a storm chaser? 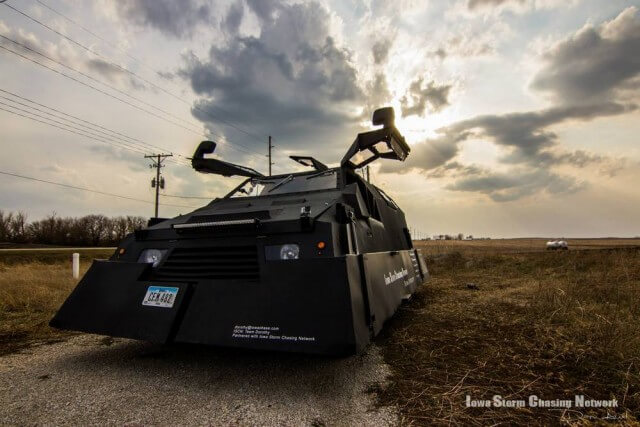 It’s a dangerous business chasing storms and ultimately tornadoes, but then so is walking out your front door. Storm chasers can be either enthusiasts who risk life and limb to get inside a tornado at almost any cost, those who prefer to observe the majesty of nature from a safer vantage point like a sturdy building or the rest, who prefer the relative safety of the Internet to observe, photograph and report. I admit to being a storm enthusiast as there aren’t many events that bring you the adrenaline rush in quite the same way as a force ten or a lightning storm and to capture at least some of it on film is the icing on the cake. 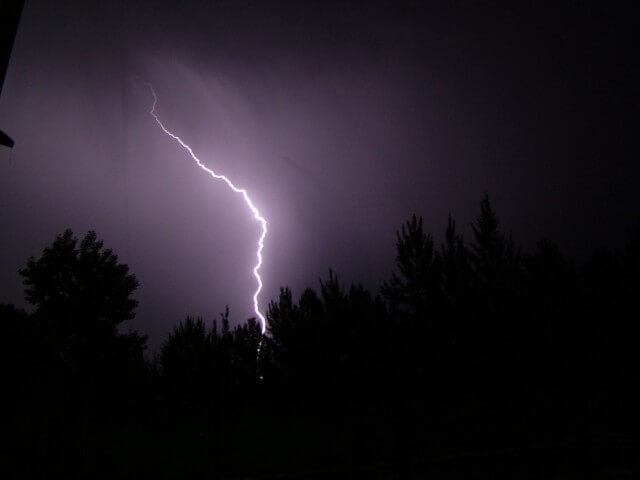 The picture above involved brute force persistence and a lot of luck, whilst some thunderstorms are so prolific in lightning discharges that you could snap away and probably get ten or more of these in a single night and be the toast of the town, but be careful where you stand.

Is it going to rain?

In the end, what most people want to know is whether it’s going to rain or snow and whether it’s going to be warm or cold. My other half often asks me what it’s going to be like outside today and believe me, that’s a heavy burden of responsibility as far as ladies’ fashion is concerned. After all, should she take my prediction seriously and walk out of the house in a thin summer blouse and a short skirt, is it really my fault if a sudden change in wind direction causes her to return home frozen to the marrow?

But spare a thought for BBC weatherman Michael Fish who in October 1987 denied reports of a hurricane approaching the south of England, when in fact the following day, we all woke up to scenes of chaos and destruction, following the most powerful storm since 1703. The poor fellow had that hanging around his neck for the rest of his career.

Weather forecasting today is certainly a lot more accurate than say, 1987, but it’s not an exact science and is more a combination of factors, including an understanding of the atmosphere and the met man’s experience that come together to give what can reasonably be expected as an accurate forecast. On the other hand, our expectations of weather forecasts and those that deliver them have grown exponentially, resulting in a skewed picture with litigation not being very far off the agenda. To illustrate my point and whilst earthquakes are not weather events, six Italian volcanologists were found guilty of manslaughter in 2012 for allegedly failing to give adequate warning of the L’Aquila earthquake. Their sentences were overturned in 2014, but the trial sent a shockwave through the entire scientific community.

Where I live, in Buenos Aires, one could say that generally the weather is utterly benign. In other words, it can go on for months on end with seemingly no weather to speak of at all, which for me and others of my ilk, is pretty frigging dull. The national meteorological service on the other hand, fears many things and I’ve seen many a weekly forecast to look a little like this, which really says not very much at all of course, but does cover a few bases:

Which segues quite nicely to this…

Do you have a favourite weather site or weather related story? Let us know in the comments below.

6 thoughts on “Where do you get your Weather Forecast?”