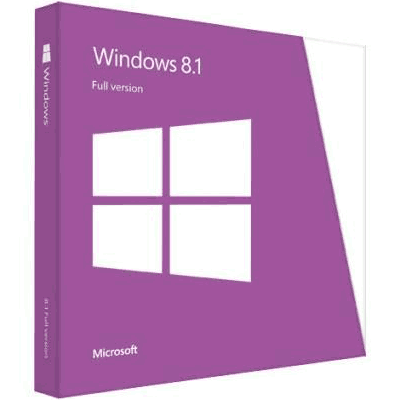 No one would argue that Windows 8 created quite a brouhaha from the moment it was announced. Small children screamed. Grown men cried. Eulogies were read. The remainder of the world’s population wondered out loud if Windows 8 was the end of computing as we knew it. OK, I’ll admit I may be a little over the top in describing the reactions, but Windows 8 was more divisive than Windows ME and Windows Vista combined! Was it deserved? Not in my opinion.

They did what to my Start Menu?

Windows 8’s biggest points of contention among would-be users were the Start Menu and Desktop, both of which were still there, if a little different than before. I use the term “would-be users” because a majority of those complaining about Windows 8’s re-imagining of the user interface had not even used it. A person’s feelings about personal items run deep, and in some cases deeper than politics and religion – we only need to look to the Mac vs PC crowd to see this in action. They were feeding off the internet blood buzz surrounding Windows 8 and it became a vicious circle.

Windows 8 was – and is – a re-imagining of the operating system. A very timely, ambitious, and innovative effort by Microsoft to provide end users with a consistent user interface on phones, tablets, and computers. Phones and tablets are surpassing desktops and laptops as the go to device for many people and Microsoft saw the writing on the wall and took action. The Start Menu is still there, although redesigned as the Start Screen. The Desktop is still there. The programs you know and love still work. Believe it or not, most everyone I know who has personally used Windows 8 for any length of time actually like it.

I see the point Microsoft was trying to achieve with their effort and appreciate it. I currently use Windows 8 all day every day and while I was a little cautious about my experience when I first installed it I have grown to love it. In fact, before Windows 8 was available to the general public I wrote the following in Windows 8 Released to the Wild.

I, for one, look forward to new Operating Systems like a child looks forward to an amusement park visit, but I approach Windows 8 with a bit of trepidation. Why? In Microsoft’s effort to create an operating system that is both touch and keyboard/mouse enabled I don’t believe enough effort was placed on the user experience for those stuck with the old faithful keyboard/mouse combination. What do I base this belief on? Not much! My experiences with Windows 8 have been limited to basic interactions with the OS running in a virtual machine on my laptop. For better, or worse, I will be installing Windows 8 and using it with an open mind once it is available to me. I’m sure my fears are over exaggerated and I’ll let you know in a few weeks. There are new features that I’m absolutely excited about such as File History, Storage Spaces, and Refresh/Reset. In the mean time here’s what you need to know right now. Keep an open mind! This could be the best operating system to ever leave Redmond and a pivotal moment in personal computing.

Obviously I do not feel cautious anymore. I love Windows 8. That said, there are many things I believe Microsoft could have been done better.

What a difference a year makes!

OK, I’ve admitted I like Windows 8 and also that Windows 8 was far from perfect (please put down the lanterns and pitchforks!). Some will say that Windows 8.1 is to Windows 8 what Windows 7 was to Vista, but we need to realize that Microsoft has settled on releasing smaller, yet more frequent, operating system updates. Gone are the days of a new major OS every 3 or 4 years. Gone are the days of Service Packs. Say Hello to continual improvement and refinement. Windows 8.1 is just that – an improvement and a refinement and Microsoft has done an excellent job refining the Metro interface while staying true to it’s “touchable” roots, improving features that weren’t “quite right”, and adding others requested by consumers.  Let’s take a look at the more prominent changes in Windows 8.1! 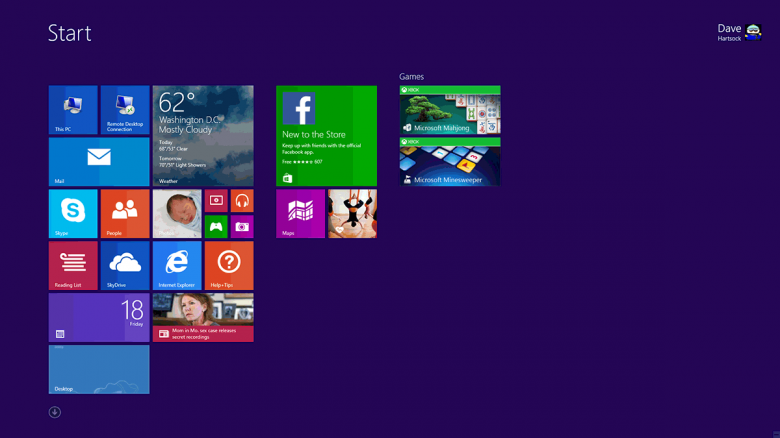 At first glance the Start Screen doesn’t show any obvious differences, but that couldn’t be further from the truth. Microsoft has fine tuned the experience in some very impressive ways! 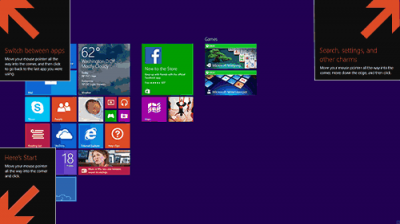 The first thing you will notice is Microsoft has made an effort to better show where the corner hotspots are, and what they do. 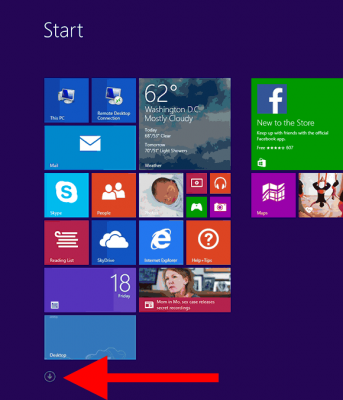 The Start Screen doesn’t show all installed apps and this caused many users untold confusion. They had difficulty finding their apps or wondering why the app didn’t show after installation and Windows 8 didn’t help as you had to jump through hoops to find them. Windows 8.1 has greatly simplified this by adding a simple arrow to the lower edge of the Start Screen. One simple click and you can now see all installed apps and programs. 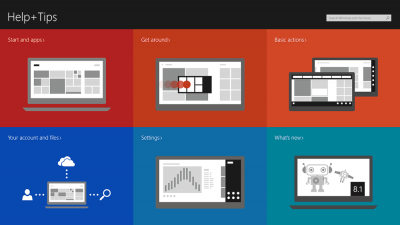 Windows 8.1 adds a helpful app on the Start Screen from the get-go to help users find their way around the interface. 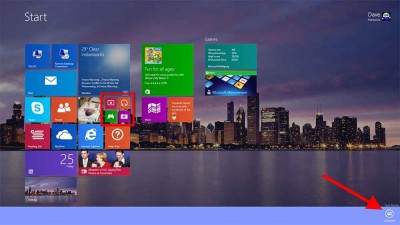 Customizing the Start Screen to suit your liking in Windows 8 was a chore and there were few options. With Windows 8.1 simply right click on a blank area of the screen and choose Customize. You can easily move icons around and there are more icon sizes available. 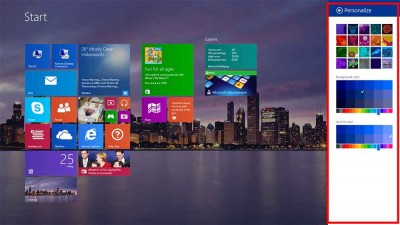 Personalizing Windows 8 required the user go on a wild goose chase, but Windows 8.1 has improved on this greatly. Personalization is available directly from the settings menu on the Start Screen and changes are made instantly so you can see the affect as you click. There are also more options available, and some are animated. 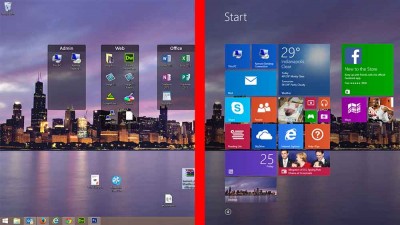 Start Button, Orb, or whatever you call it

Much of the negative buzz surrounding Windows 8 stemmed specifically from the removal of the Start Button, or Orb, and the associated menu. The relative function was still there as the Start Screen is (in essence) a large graphical Start Menu and it’s easy to see why Microsoft made the decision to remove the button.  You have to give them credit for paying homage to previous operating system versions by keeping program functions in the same general area, the lower left corner, and using the other corners for other functions. If the left corner has a function why shouldn’t the others? It just made sense.

Of course my feelings weren’t shared by the masses and Microsoft has compromised in 8.1. The Start Button is back on both the desktop and Start Screen. The function is the same, but the visual cue will help some accept the new interface and other feel more comfortable using the OS. 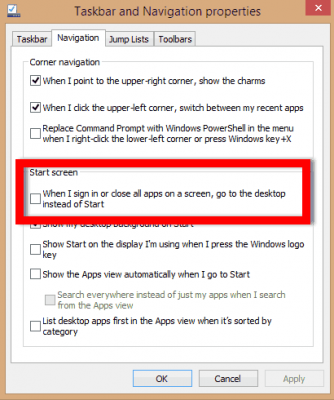 Do I hear angels singing? Microsoft has added the ability to boot directly to the desktop in Windows 8.1, which should make those who abhor seeing the Start Screen at boot very happy. This effectively turns Windows 8.1 into an updated Windows 7 less the Start Menu. 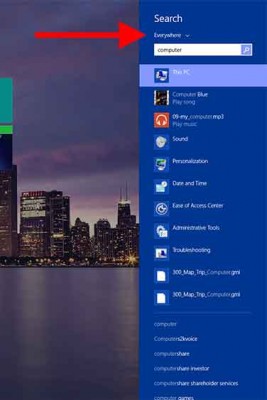 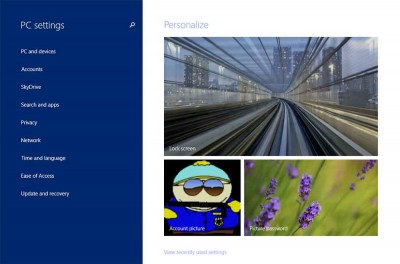 One of my biggest complaints with Windows 8 was a lack of coherence. Some things opened in the Metro interface and others opened in the Classic view. Oftentimes very similar functions were split between the two, which was confusing and tended to detract from the user experience. Changing settings on the computer was a prime example of this. Some Metro related settings could be changed within the Metro PC settings interface, but almost everything else had to be changed from the old Control Panel, which kept users toggling back and forth between the two experiences. In Windows 8.1 Microsoft has added more options to PC settings, which goes a long way toward building cohesion within the OS. 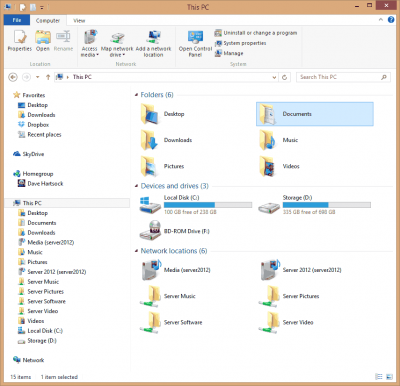 OK, whatever they call it this time has been renamed to This PC. The major change here is the addition of a Folders section to the main area and the removal of Libraries from the sidebar. Nothing major, but it may strike some as strange when they don’t see their drives listed at the top of the window.

As you can see the changes are mostly evolutionary, which is a good thing. Windows 8 is a great operating system and the 8.1 update only improves on that in ways which provide a much more coherent and useable experience. The devil is in the details and Windows 8.1 is the perfect example of that cliche!

6 thoughts on “What to Expect with Windows 8.1”