I’m a word nerd. I’ve been playing word games forever. My dad and I used to pound out 5 or 6 New York Times crossword puzzles in a Saturday evening after dinner. While I still enjoy putting pen to paper, it isn’t quite the same since my dad passed away. Now I like playing Scrabble, which was also a family favorite when I was a kid. (I wish I had kept that original turntable board with wooden tiles!)

I’ve played many online Scrabble or Scrabbly-type apps, in Facebook and on my smartphone, but the one I keep coming back to and have played for several years now is Word Biz or Internet Scrabble Club.  When you click on the ISC link it brings you to this page:

It doesn’t look very impressive, but in the end, simplicity is a major plus with Word Biz. It’s free, doesn’t have advertising, and there are no email communications to you. You install the interface, register a username and password and then play to your heart’s content.  It’s available for Mac, PC and Linux.

Some bonuses with using Word Biz include:

For example, I usually play 8 minute games, suppress all chatter except buddies while playing, only accept challenges from those who fit my formula (certain ratings), only play rated players, play VOID (Which means no words are accepted unless they are in the chosen dictionary. This keeps people from cheating at the last minute when the time runs out.  Players are also not penalized when playing an incorrect word with VOID.  You can also play DOUBLE if you want to lose a turn after a challenge.) 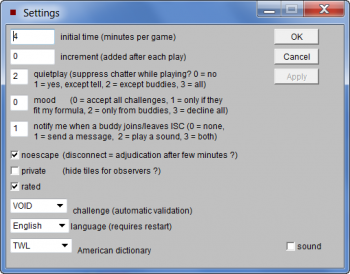 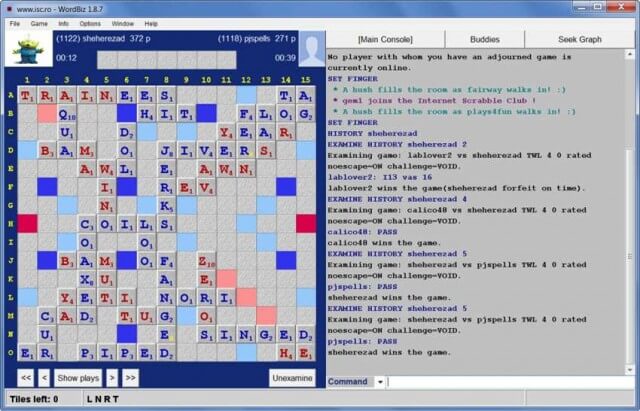 Word Biz is pretty addicting (I’ve logged 23,348 games.) and I’ve noticed over time that I’ve become pretty competitive (which, in my case, doesn’t necessarily add up to a high rating.  🙂  ) Other players take it way too seriously. They hate to lose. You may have to no-play these folks. Generally though, you gather up some buddies that you’ve played a few times and like or you play some really good players with high ratings and you learn to be a better player in the end.

Frankly, the amount of things you can do in this particular online Scrabble game are truly astounding given that it’s free and has been pretty stable since I’ve been using it. They hardly ever update it and it just seems to keep on working. It isn’t available on your phone and maybe that’s the one downside for me, but there are plenty of other options available for that purpose.

Give it a whirl.

2 thoughts on “The Best Online Scrabble”