How Does Technology Play Out When Watching Football Games?

My husband is one lucky guy. I love sports every bit as much as he does and like the same sports teams. I am elated that football season is now upon us. It doesn’t matter whether you are in attendance at the stadium or sitting in your favorite armchair watching the game, technology is a part of modern-day viewing. Seeing as football season is upon us and I am an avid fan, I chose to write about the way the NFL uses technology.

High Definition TV, how did we ever live without having it? How we enjoy watching and supporting our favorite sports teams is enhanced by the use of technology advances. Has it made a difference, though, in how the game is played and enjoyed? Preserving the games traditions and integrity is important but time marches on, so we have to adapt.

A recent report revealed that the internet is as important as air, water, food, and shelter to most college students and young professionals. Therefore, stadiums are in a race to digitize in order to keep this age demographic coming to games. Everything from retractable rooves to high-end sound systems and Wi-fi, the sports venues have to stay up-to-date to draw in the fans. Philadelphia has solar panels and  14 wind turbines and boasts of being the ‘greenest’ stadium in the league when it comes to technology. The Texans have a scoreboard that is 53 feet tall and 277 feet wide that takes up more than 14,500 square feet of display surface. When younger fans find that they are unable to get connected on their smartphones, the likelihood of them returning is very slim. With high definition TVs out there, many fans would rather just host parties and watch the game at home. The monetary savings is huge in the long run. There is something to be said, though, about experiencing the whole atmosphere of the stadium.

Instant Replay – How Did We Live Without It? 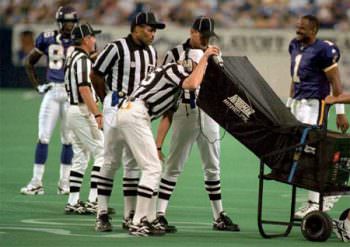 The first time the NFL ever used instant replay was in a regular season game between the Chicago Bears and my beloved Cleveland Browns. Use of Instant replay gave the Browns a touchdown overturning the initial ruling on the field that the ball was recovered out of bounds. There are many times in games that Instant replay has made all the difference in penalties as well as points that are game-breakers. Let’s face it, game officials can make mistakes warranting some calls to require a second look. The fact remains that only 36% of all replays since 1999 have ever been overturned.

Just Say ‘No’ To Clipboards

Coaches carry Microsoft Surface tablets, not clipboards. They are the official tablets of the NFL. The tablets were designed by Microsoft to take the extreme temperatures as well as the occasional drop, as well as holding a charge through an entire game. All the tablets are configured to be identical and cannot access the Internet or install any apps that might give a team a competitive edge. The NFL locks the tablets away until just before kickoff and collects them as soon as a game ends. Now, if they can only get players, coaches, analysts and TV announcers to identify them correctly. They have given Apple free publicity by calling them iPads. 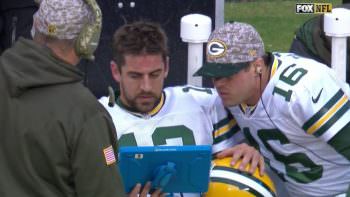 Trainers can diagnose as well as treat players. On the road games, tablets come in handy so they can access players’ medical records right on the sidelines. This saves a lot of time and can make a valuable difference in treating them. Equipment such as helmets, face-masks, gloves, and pads are also constantly evolving to make it safer for players.

My husband partakes in fantasy sports leagues. Gambling and fantasy sports are part of what makes the NFL one of the most popular sports in the country. Years ago my husband subscribed to magazines to help him make his picks or used USA Today to check  on player stats. These days, he peruses the Internet and can change players just before a game starts using an App and his Smartphone. (I brought him into this century with one of my old Smartphones– he was using a Flip Phone!)

How Will Future Technology Change The NFL?

Much remains to be seen and we can only guess what the future may bring. When I go to a baseball game now, they can track how fast a pitch is delivered. I will predict that the chains to measure first downs will go by the wayside to be replaced by some sort of laser beam. Pads on players will have chips that will determine how fast they are moving, how hard they get hit, etc. There is something to be said, though, for embracing tradition rather than going full speed ahead with technology. I often wonder if eventually it will come to sensors being put into the footballs to track distance, velocity and an assortment of other tracking details. Just think, then it could track football inflation as well and we would have no “Deflategate” and Tom Brady would be starting the season rather than sitting out the first four games. The NFL is a  big money-maker and business machine. They will not go stagnant and will constantly embrace technology to lure more fans to the games and make more money.

4 thoughts on “Technology – A Game Changer In Football?”