Malwarebytes Anti-Malware (MBAM) is one of my all time freeware favorites, and I am certainly not alone in that regard – MBAM is one of the most downloaded freeware programs on the planet. Malwarebytes Anti-Malware follows a common ‘freemium’ distribution model, with the free version providing one of the best (if not the best) and most effective on-demand malware scanner/removers available while the paid for version includes the additional security afforded by real time protection.

What many users may not realize is that Malwarebytes also offers two other relatively recent free security tools… Malwarebytes Anti-Rootkit (AKA MBAR) and Malwarebytes Chameleon. MBAR was first released almost 12 months ago and still remains in Beta stage, which may seem a rather protracted Beta period. However, considering the huge and diverse variety of software configurations out there, it would be nigh on impossible for Malwarebytes labs to predict and test for all possible situations, so they rely on users for final testing and feedback… that’s what Beta is all about. Malwarebytes CEO and founder Marcin Kleczynski had this to say:

With MBAR we have been running the open beta now for almost a year successfully, and while there is a small chance specific configurations could pose issues; we are confident for most users MBAR will be extremely effective against any rootkit infections they encounter.

Rootkits are particularly pernicious little devils and removal often involves damage to the system. That’s because rootkits bury themselves deep into the operating system, replacing critical files with those under the rootkit’s control. So it’s not always just a simple matter of identification and removal, it also often involves a certain amount of damage control. I’ve been following MBAR’s progress with interest for some time, I may have even mentioned it here at DCT at some time, but I’ve always wondered why this latest tool was not included as a component or feature within MBAM itself. We now have the answer, coming from Marcus Chung, Executive Vice President and COO at Malwarebytes:

Marcus also pointed out what now seems pretty obvious, that it’s all about reaction times. Rootkit developers have become adept at quickly morphing their code once they learn that rootkit removers recognize their handiwork. Using a separate tool, MBAR’s developers can react just as fast without any concern of damaging a larger, more complex program like MBAM, and also avoid the logistics of rolling out a new version of MBAM each time.

Makes perfect sense to me.

The second of the two, Chameleon, is (as the name suggests) pretty much Malwarebytes Anti-Malware in disguise. It’s specifically designed to help overcome those times when malware recognizes the security scanner you are attempting to install or run and prevents you from doing so. Chameleon fools the malware into believing it is something else altogether, allowing it to start and hopefully destroy the infection.

The initial screen is merely a warning regarding the Beta situation which we have already covered. Down the left hand side under “Overview ” you will see the steps set out in logical sequence – each click of the Next button will take you through to the following step: 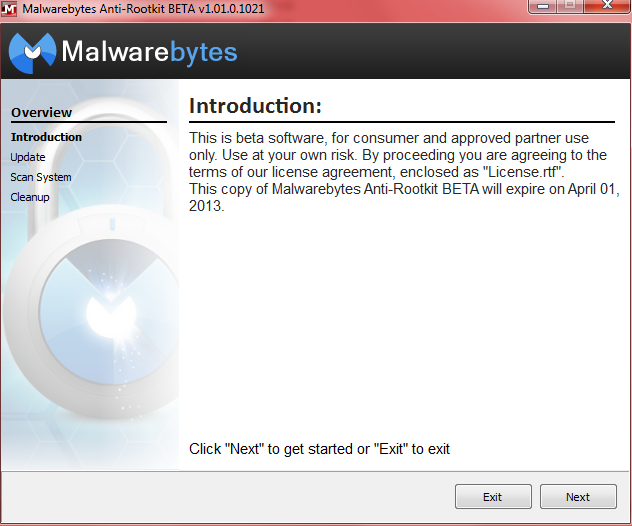 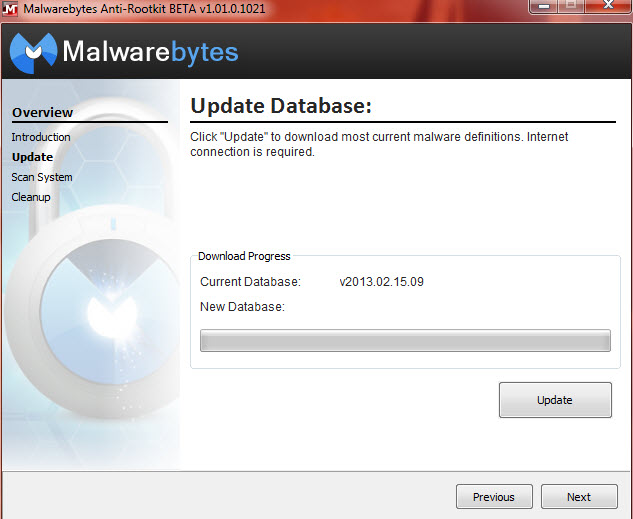 Scan System: around 5 minutes to completion on my Win7 64-bit system 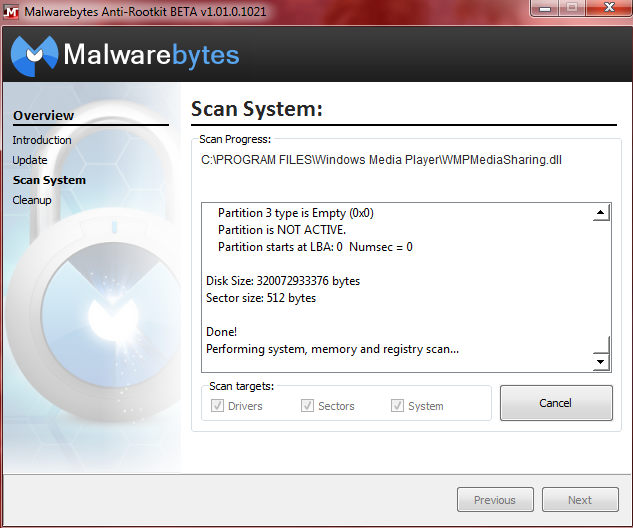 Cleanup: if you are fortunate and your system is clean you will see this 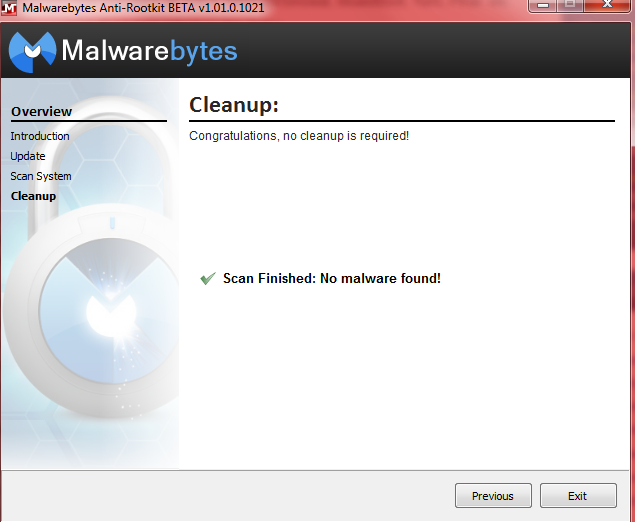 In the following screenshot I have highlighted three of the files included in the MBAR folder: 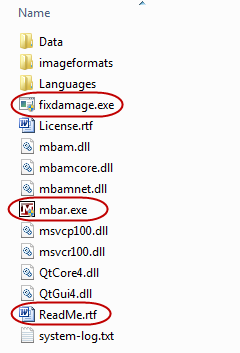 If after running the MBAR, restarting and verifying that the system is now clean of infection you experience other problems, such as lack of internet connectivity then run the tool fixdamage.exe included with the package. It will repair certain system services and settings which are frequently broken by certain rootkits. After running this tool you should always restart your computer even if it does not prompt you to do so.

MBAM is a very effective all-rounder but this little tool is dedicated specifically to the identification and removal of the particularly nasty rootkit family of malware.

Did you know that, if you have the latest version of MBAM Free installed on your PC, then you already have Chameleon available? Yep, Chameleon is now included in MBAM’s program folder:

If you find that malware is preventing MBAM from running, simply navigate to and open the Chameleon folder, then click on the executable to run Chameleon: 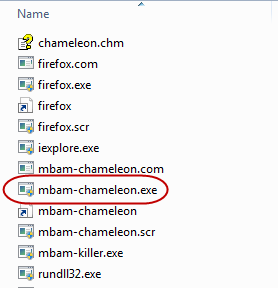 If you do not already have MBAM installed and malware is preventing installation, Chameleon is also available as a separate 1.4MB zip download here: http://www.malwarebytes.org/products/chameleon/

History has taught us that the name Malwarebytes is synonymous with excellence in security software, and with these three tools on hand, you should be ready to tackle even the most stubborn of infections.

13 thoughts on “Malwarebytes: Not just a pretty ‘anti-malware’ face!”