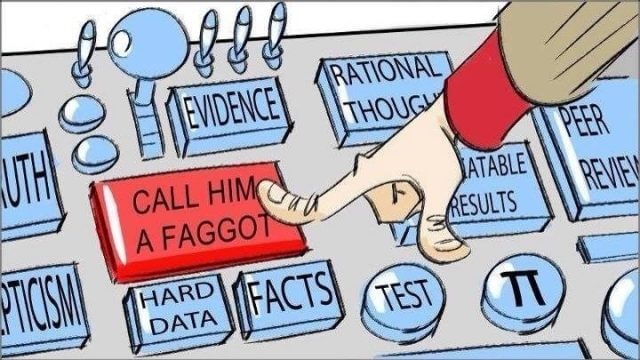 Cancel All My Meetings – Someone Is Wrong On The Internet!

The above image speaks volumes, although what used to be dubbed netiquette — that quaint phrase invented by silver surfers in the age of the information superhighway of the noughty nineties- – is observed a little more rigidly nowadays. Particularly since E V E R Y B O D Y has a propensity to take offence at the tiniest of slights today and it’s getting worse by the bleeding second. The sad fact is that we’ve all become Internet Fundamentalists and you can never win an argument with one of those, yet we still think we can. Anyway, against my better judgement I signed up for Twitter last week after years of banging my head against the keyboard and swearing that I would never, ever indulge in that attention-seeking nonsense. 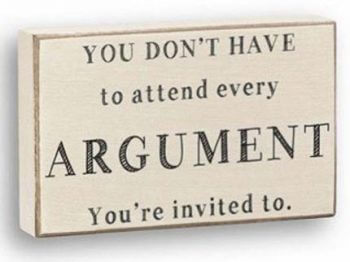 Now I’m facing an avalanche of Tweets every f***ing morning about stuff that I otherwise couldn’t give a damn about. I’ve got Twitter all over me like a rash and the only single reason I signed up for it in the first place was to give my new website a larger reach. I’m receiving Tweets from Argentine government ministers announcing new one-way traffic systems in the city of Buenos Aires, soap opera divas crying into their cappuccinos over some bad Photoshop job and The President of The United States throwing his toys out of the pram for the umpteenth time on a subject of vital national security, or not as the case may be. And I didn’t even ask to follow these twerps either, so I have to unfollow them one by one rather than obliterate them all, execution style. The Net really isn’t fair sometimes is it?

However, this Chrome extension lets you unfollow absolutely EVERYBODY on Twitter which defeats the object I suppose, but at least you’re not going to be prone to their rantings anymore.

Stop The World, I Want To Get Off! 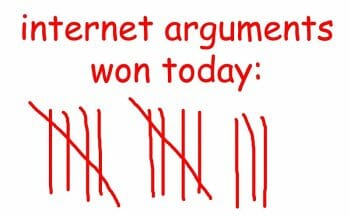 Clearly, the route to sanity is to either switch off all notifications on all your devices, uninstall those troublesome programs and/or, simply don’t get out of bed in the morning. But that’s just it– the beauty of the Net is in its instant gratification and our natural curiosity which of course work both ways. Try posting a YouTube video entitled Trump vs Clinton – Who Do You Prefer? (substitute names to suit severity of pending argument/warfare) with clips of the two protagonists sparring it out and sit back to watch the sparks fly in the comments section. The same effect can be achieved with almost any X vs Y comparison and some excellent examples could be:

Last year I uploaded a video to YouTube showing how tricky it was to get past a certain point in DOOM, with me as the US marine falling to my death on the inhospitable Martian surface. This was a big mistake because others were clearly having the same problem jumping across that chasm and they thought my video was going to be their long awaited solution. It doesn’t bother me being called a faggot, a douche or similar, but when the name calling brings my gaming integrity into question, I get a tad riled. However, rather than rise to the bait and let’s face it, YouTube is littered with bait for the unwary or susceptible, I simply deleted the offending comments and moved on with my life. Bear in mind that you can only delete comments that appear on your own channel, otherwise YouTube wouldn’t be half as much fun would it? 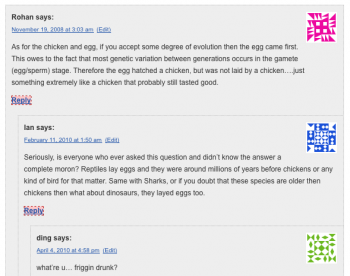 On the other hand, Facebook is a little more restrained, is moderated up to a point and I once posted a few lines in a local bikers’ group about a stormy nocturnal journey I had once made in the outback, which provoked an outcry from some other bikers who became indignant at my apparent suggestion that it was okay to travel at night, on a bike in the frigging rain. On that occasion, my big mistake was to retaliate against the trolls and pussies, when in fact I should just have posted a smiley face or some other device guaranteed to stop the playground squabble stone dead, not to mention frustrate the living daylights out of them. Facebook groups are a little different though, and attract admins that like nothing more than donning a Nazi uniform and moderating their groups by strangling the life out of them. Some Facebook groups even insist on the completion of a tedious, power-hungry questionnaire when you apply to join, giving rise in me to a huge ‘What the f***!‘ sigh. You couldn’t make it up really, but you have to ask yourself whether you want healthy argument on the Net or pointless bitching just for the sake of pointless bitching. This video makes a wonderful point and prompts the question, ‘What am I doing with my life?‘, a comment frequently seen on YouTube and one that I never get tired of reading.

In the end though, the ideal refuge for a good old fashioned dust-up is the community forum which, in spite of the naysayers, are still healthy and thriving. Paradoxically, a lively thread where two forum members slug it out over some political, religious or sporting topic that they are never ever going to agree on, is quite the spectator sport and as long as it’s not over moderated, can be a popcorn moment of great entertainment. 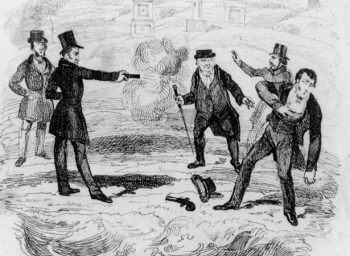 In fact, a forum of which I was once a member and banned from numerous times, regularly sports this kind of argument with the main protagonist being so deeply entrenched in his political views and now being in opposition to the government of the day, the smug and holier than thou mantel has now been replaced by indignance and dubious, unsupported claims of wrongdoings by the incumbent government he so loathes. This provokes a natural tendency for lurkers to well, lurk really, and the sparring usually ends up as a two-man contest, ebbing and flowing depending on the weather or juicy crisis of the day. So be my guest and lurk, but if you want to jump in with both feet, be prepared to take as much as you can give. But if you’re inclined to stay the course and take up the challenge, a survivable strategy is to provide irrefutable sources and once those get taken apart — which they most definitely will- – there’s nothing quite like a back-handed compliment to inflate your opposite number’s ego, letting them think they’ve won, whilst you sit back in the smug knowledge that all they did was take the bait. You see, it can be fun after all!

1 thought on “How To Survive Arguments On The Internet”