A reader recently wrote to me concerning a problem he was having with his Table of Contents (TOC). He had a heading on two lines and wanted it to appear in his TOC on one line.

Below is what he wanted to appear on one line; both lines were styled with Heading 1: 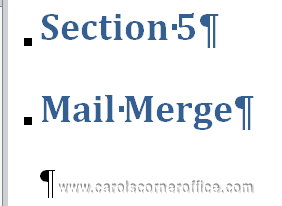 Because each line is a separate paragraph, Word treats them as two separate Headings when it creates the TOC.

What he wanted was for the two lines to remain in the body of his document but display as one line in his TOC.

The easiest solution to this is to use a soft return (Shift + Enter) between the lines in the body of the document, instead of Enter. If you want to see what it looks like you should have your Show/Hide enabled, which I heartily recommend as a matter of course.

When you update your TOC, select Update entire table.

Your TOC will now display the text on one line.

If you do not like the the title butting up against the Section label, you can add spaces, a tab or a dash, as I did to make it more aesthetically pleasing.

Carol holds A+, MCP, and MOS computer certifications and is the resident DCT Office expert. She trains the staffs of small law firms in the use of Microsoft Office applications and has authored many books covering Microsoft Office as well as written articles for Infopackets, TechnoLawyer, and Digital Harbor. For more Microsoft Office tips visit Carol's Corner Office or follow Carol on FaceBook and Twitter.