In the old days, it used to be called a DOS Box, but times change. Thankfully, it remains the same steadfast utility it has always been and power users, myself included, can’t seem to live without. There is now what is called the Power Shell which seems to be taking over the old DOS Box’s reign, but I can’t get used to it. Admittedly, I haven’t made much of an effort, either. I am comfortable in the old ways.

There are many things you can do in a Command Box that can’t be done in Windows proper. To see a list of those things, open a Command Box and type help and hit the Enter key. The list is formidable and if you’ve never seen it before now, you might be a bit overwhelmed by it all.

We’re not really here for a course on how to use the Command Prompt so much. Today we’ll talk about how to make it pretty. That is, change its colors, font size, starting window size and position, etc.

How to Open a Command Box

To open a Command Box, use the Windows Key + X Hotkey combination and choose Command Prompt from the Power Menu that pops open (don’t you love these names). There are actually two choices and one of them is for an Administrative level Command Box. For this exercise, it doesn’t matter which one you choose.

Note: Changing settings in the Admin Command Prompt will not affect the other &#8220;normal” Command Prompt, or vice versa. They are treated individually.

Once the Command Box opens, Right-click on the Title Bar and choose Properties in the Context Menu. Hey, I swear I didn’t have anything to do with Microsoft’s naming conventions. Really! 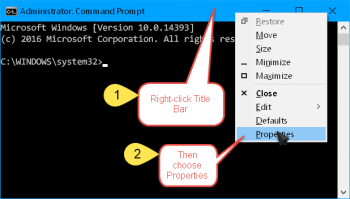 This will open the Properties Sheet and it has several tabs across the top.

The only tab we’ll discuss today is the Layout Tab. You can play with the others all you like in order to set things up exactly how you want. For instance, in the first image at the top of this post, you can see that the text is yellow and the background is blue. I like it because it is reminiscent of older days when I was younger. The colors can be changed to anything that suits your fancy in the… you guessed it… Colors Tab. 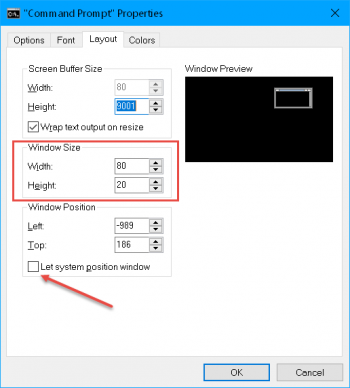