In January I wrote an article How To Set Up A Community Forum following the disastrous experience I had with a local Argentine hosting company and that my friends, is not the end of the story. When I set up my Compufix business in 2009 I struggled and sweated with Microsoft Front Page, managed to cobble together a rudimentary website, host it with GoDaddy and the results weren’t exactly stellar, giving the impression of an early 90s effort, put together using a kiddie’s version of Microsoft Paint. I grabbed this snapshot from the Internet Archive Wayback Machine by the way, a free service that takes snapshots of every website in existence since 1996. 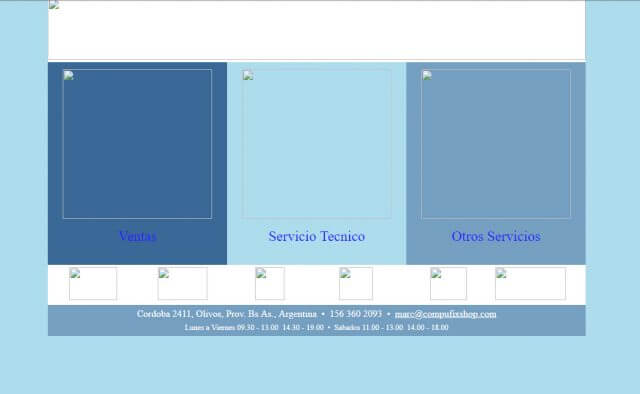 As you can see, my effort looks decidedly amateur, so I then turned to my local web designer and hosting company to see if they could do a better job. They did, and came up with a bilingual effort that didn’t look too bad at the time. In fact I was able to update the products catalogue and prices myself through the back end and for a few years the website did the job. Again, this snapshot from Wayback shows how it looked. 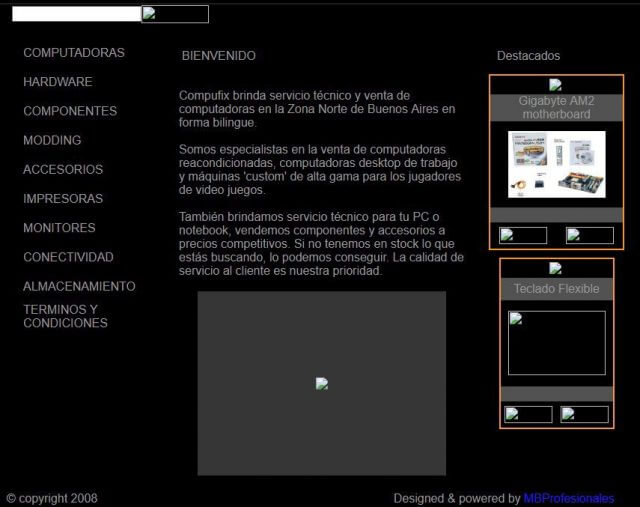 Again, a little 90s, my logo was a Flash animation and the black theme couldn’t be changed. Fast forward a few  years and the site began to go down every month, became prone to hack attacks and PayPal spoofs, until eventually even the hosting company couldn’t be bothered to help me with it, so it was game-over, essentially.

After banging my head against a brick wall for countless weeks, I bit the bullet, bought a basic hosting package from the tried and tested GoDaddy and decided to build a new website using WordPress, which is free of charge. It also has the advantage of being familiar to me since Dave’s Computer Tips uses the very same software, which is simple and intuitive to use. But first I needed to change the name servers for the domain and fortunately, since I had bought the domain compufixshop.com directly from GoDaddy in 2008, I own it and was able to change the DNS settings through the GoDaddy control panel. This was a relief, since having to rely on the hosting company you’re escaping from to carry out this simple task, can sometimes be problematic and let’s face it, there’s nothing worse than having to rely on third parties if you want to make progress in a forward direction.

Setting up a website today is a darned sight simpler than it used to be ten years ago and WordPress has made the job simpler still, bearing in mind that most of us couldn’t tell the difference between PHP, MYSQL and an HTML tag anyway. I had no idea what I wanted the site to look like, as long as it looked fresh, inviting, had a single page layout with menus and presented a professional, enthusiastic service to potential customers. So, having set up the GoDaddy hosting, my first port of call was WordPress.org and that’s an important distinction from WordPress.com who manage your hosting, but limit your choices. For example, your domain would by default include WordPress.com and you can’t upload any custom themes or plugins, so I went for WordPress.org and downloaded the latest 4.9.x version to a folder on my PC. I then unzipped it, uploaded it through CPanel to the root directory (which is usually public_html) of my site, browsed to it and the install dialogue magically appeared. 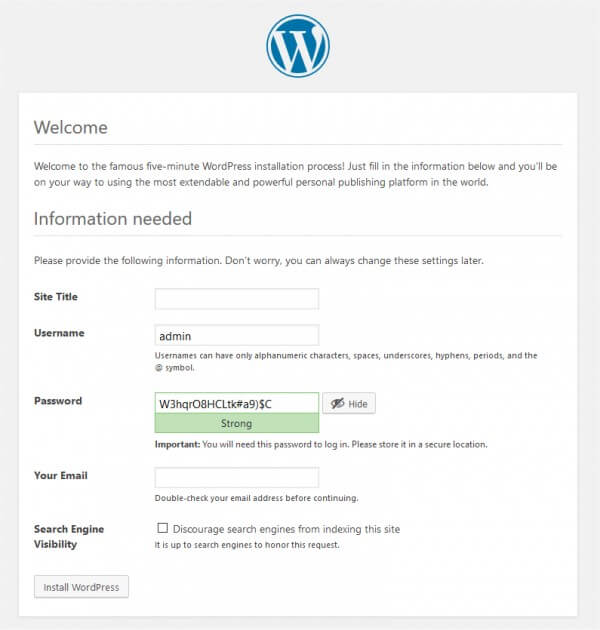 I was pleasantly surprised by the simplicity of the entire setup routine and indeed, within less than five minutes I was up and running with a new website, albeit in a raw state.

The first thing I needed to do was find a suitable theme and believe me, there are thousands out there, most of which are free of charge. I finally settled on the OneTone theme from MageeWP, since it’s a single page theme and has some pretty cool features. To achieve all this you simply access the admin back end and select from the option slide-outs in the left side panel, choose Appearance and then Themes. 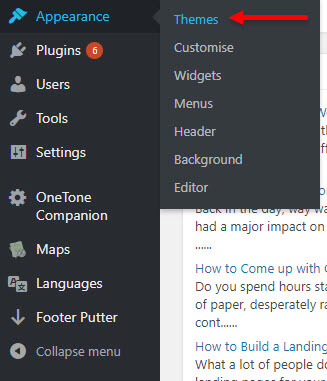 Customising your theme is of course where it all happens and designing your new site in WordPress is simple, intuitive and with the advantage of giving you a live preview of your changes on the fly. 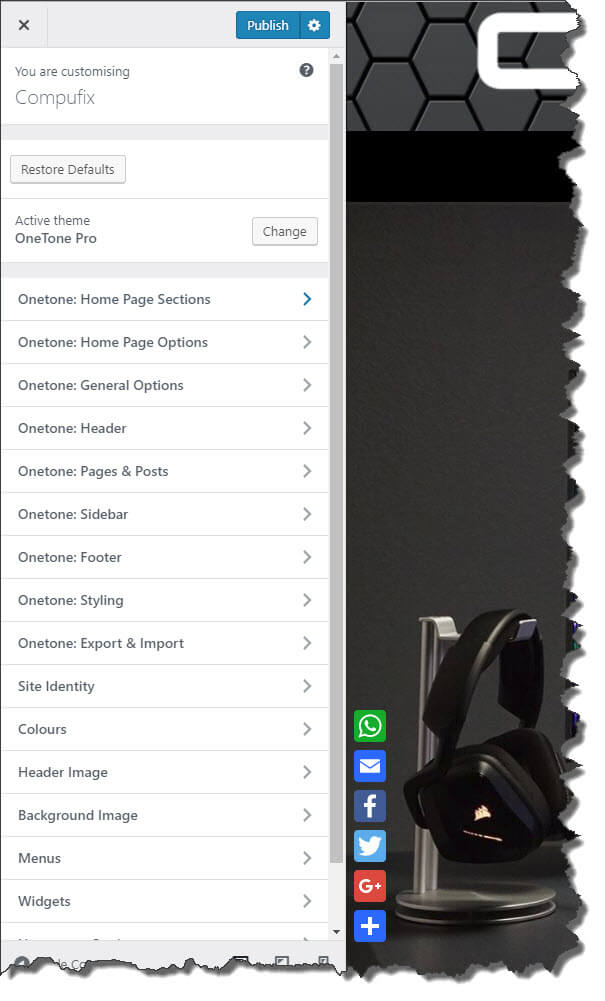 Every change you make in the sections to the left are immediately reflected in the preview to the right, which refreshes the page after each modification. You do of course have a chance to undo changes or simply to abandon the session and return to the main back end.

Once I had uploaded and placed the required images into the correct sections, renamed the menus, added a tagline and a logo, I then needed to add multilingual support. At first this was a little daunting, but by installing the Polylang plugin this was achieved with relative ease.

I say relative, because at first I had a little difficulty in getting my head around the fact that every single string needs to be translated from one language to the other or, as was happening to me for a while, English text will appear in Spanish sections and vice versa. Also, when firing up the Polylang plugin you need to decide which is the primary language and although I’m clearly a native English speaker, the primary audience for me is Spanish speaking, so the website opens to the default Spanish page.

I’d be lying if I said I didn’t have a few head-banging moments, but with all things computer-related, logic won out in the end and I had to cast aside any idealistic creativity for this part, simply to achieve a clear result.

There’s a plugin for practically everything on WordPress and it’s tempting to bolt on all the shiny glitter that you see. But in reality, it’s more sensible to select a few that you really need and to stick with those. Here are the plugins that I decided on:

For me, social media is a tool and when used as such can help spread the word and increase your Internet presence, so it’s really a must-have, as is SEO visibility, a decent footer and Google Maps integration.

Where possible, within the options of the theme or plugin, I opted for the regularly used buttons to float (always visible). For example, the social media and back-to-top buttons float, in an effort to make the website as easy as possible to navigate around.

How My WordPress Site Looks Today

Many websites are organic, but there does come a time when you have to say that’s it! At the moment www.compufixshop.com does what it sets out to do and in a simple, single page and mobile friendly format. I have plans to add features, such as machines currently on sale and to make the product gallery a little more attractive. But for the moment, the essential multi-language features are all there, I can be easily contacted through Whatsapp, email or Facebook and potential customers know who I am and that I have a proven track record in the business.

In conclusion, I would absolutely recommend WordPress to anyone wanting to set up a new website. I’m certainly no expert at web design, but it’s pleasing to see that, what was once a black art for the so-called Webmasters, is now a paint by numbers, fun experience which can be accessed by everyone.