As of 28th October Google’s new ‘YouTube Red’ subscription service came into play. The service costs $9.99 per month and, at this stage anyway, is only available in the US. 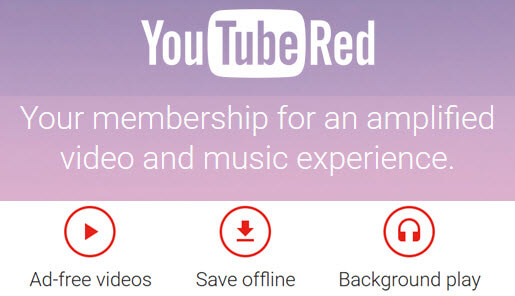 According to the YouTube Red site, $9.99 per month provides users with the following benefits:

It should also be noted that: “YouTube Red benefits won’t work on YouTube videos that you pay to view, such as paid channels, movie rentals, and pay-per-view purchases.”

Personally, I see no value here, Mind you, I am not exactly a heavy YouTube user so perhaps I’m missing something. YouTubeRed might be worthwhile for existing Google Play Music subscribers who can take advantage of the so-called “benefits” for free. Or even may entice those who have been contemplating a Google Play Music subscription to actually take the plunge. However, that aside, I can’t see how this even comes close to something like Netflix at roughly the same cost per month.

Personally, I see this as a money-grabbing exercise by a company whose wealth is already measured in the billions of dollars with enough yearly income to sustain a small country. Sure, YouTube is extremely popular, but why Google would need to monetize it is beyond me, apart of course from sheer greed.

Anyway, I am obviously one person who is less than impressed with what YouTubeRed has to offer. What about you, would you consider signing up?

5 thoughts on “Google’s New ‘YouTubeRed’ Subscription Service: Is it worth it?”